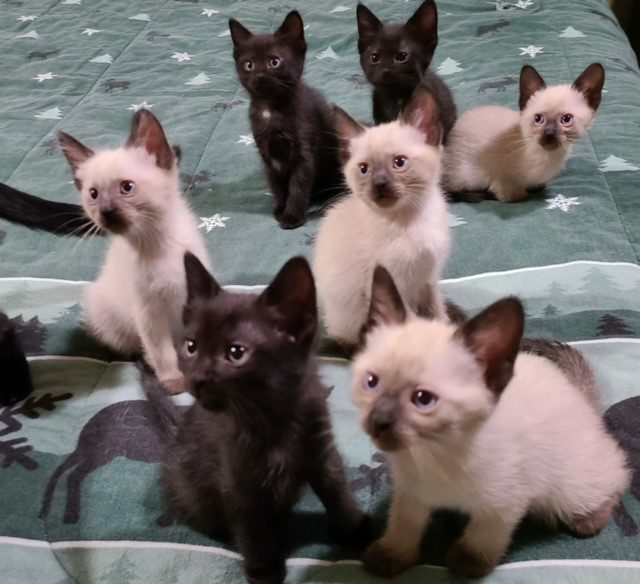 Kittens from Prairie to Peaks Animal Assistance Foundation. PPAAF's founder Synthia Misner says they will be available soon, with their vetting completely sponsored by PPAAF fundraising. They will make their debut at the September Flea Market and Pet Supplies Plus September 24 in Minot. (Photo: submitted)

Kittens from Prairie to Peaks Animal Assistance Foundation. PPAAF's founder Synthia Misner says they will be available soon, with their vetting completely sponsored by PPAAF fundraising. They will make their debut at the September Flea Market and Pet Supplies Plus September 24 in Minot. (Photo: submitted)

MINOT – Several shelters and rescues in Minot are helping animals find a safe place to live.

The Dakotan contacted these rescues which include Animal Empowerment League, For Belle’s Sake Rescue and Rehabilitation, Inc, Prairie to Peaks Animals Assistance Foundation, and Hairball Haven.

Souris Valley Animal Shelter Executive Director Shelbi Waters said the other rescues in Minot are home-run, and she said home-based rescues often struggle with disease control if they are not dealt with correctly.

FBS said it is not a shelter, it is a rescue, and comparing the two is similar to comparing apples and bananas.

“Rescues are donation-funded and therefore, often have more resources available, allowing them to give the animals more time to find their appropriate adoptive homes, while animals in shelters may be more limited,” explained the president and founder of FBS. “For Belle’s Sake Rescue is not run out of a home.  FBS is actually comprised of 5 facilities and foster homes.”

The founder of FBS continued saying the facilities are on private property and not managed by the city.

“FBS has strict intake procedures for all animals,” the president of FBS continued. “Any animal without a current vaccination history or coming from an unknown environment, stray, pound setting, etc, is placed on a 10-day quarantine in the medical facility.  During this time, signs of illness are monitored for and treated as recommended by our veterinarian.  Animals are not placed directly into foster homes or around other animals until after quarantine or unless the foster is trained on quarantine procedures.  FBS has never had a disease outbreak in our 12 years of existence.”

Cynthia Misner, founder of PPAAF, said she used to foster and volunteer for SVAS for 18 years.

“I was the first to be blocked from their Facebook page when they had the mass firing three years ago,” said Misner. “I know exactly how they kept that place clean.”

Misner started PPAAF a year ago, where she said she completely vets the animals, and doesn’t let anyone touch them until they’ve had at least two vaccinations. They also don’t get adopted until they are fully healthy.

“I raise money to get them completely vetted,” said Misner. “If they want to adopt before I get them vetted, they get vouchers, and I follow through to make sure they show up because the appointments are already set up. I was writing my doctoral dissertation in math and science. I am far more educated than anyone that is running any type of non-profit for animals in this state.”

Misner said she has been fostering animals from several rescues for over 40 years, even very sick ones. She also said she helped raise money for the new SVAS building, and helped animals during the flood.

“I drove in from Berthold almost every single day, donating time, often 12 to 18 hours, to helping people with their animals during the flood,” said Misner. “Do not tell me I don’t know how to keep a place clean. All these animals need help, that’s the bottom line. There’s different niches for everybody, but we need community shelter that inputs animals, and we need more vets.”

Miranda Heisler, animal rescue advocate in Minot, responded to some statements from Waters.

“For Belle’s Sake, for example, is not operating out of their home," said Heisler. "Just because they may have other buildings around/on the same property where they run their rescue does not mean they are running this rescue out of their home."

“These rescues offer a great area as well as enrichment for these animals,” Heisler explained. “How is a foster home different than an animal being in a rescue home?”

Waters said that the Minot Pound is the reason North Dakota is not a no-kill state, which she described as 90% of the animals being saved in the state. She also said that the pound will euthanize the animals after three days if the owner does not reclaim them.

Justin Sundheim, operations commander for the Minot Police Department, said the police keep stray and neglected animals for three days, and if the owner does not come to reclaim them, the police hand them over to the Minot Veterinary Clinic.

“We have a relationship with a number of our rescues in the area, and then they adopt them out,” said Justin. “So unless the animal is sick or aggressive, then obviously at that point we can’t adopt them out. Those are the ones that would be euthanized. Last year about 98% of the dogs we brought in were adopted out. About 80% of cats were.”

Sundheim said there is often a lower save rate at the pound than rescues due to the fact that it legally has to take in every animal and cannot turn them away, including aggressive and sick animals. Animal control numbers for 2021 can be found on page 19 of the Minot Police Department’s annual report for 2021. Previous years can be found on this page.

Waters also mentioned that SVAS is willing to help rescue animals from the pound.

“We let the vet clinic decide who they want to be partners with in regards to that,” said Sundheim. “I’m not going to dip my toes in regards to what kind of discussions they’ve had.”

Heisler said the Minot Pound has three reasons for euthanasia: If the animals are sick or injured, if they are feral, or if they are too aggressive to be rehomed.

“The only people who can pull an animal from the pound is the animal’s rightful owner,” Heisler explained. “If an owner does not claim their animal after three days that animal now becomes the property of the Minot Veterinary Clinic which is a separate private owned business. The Minot Veterinary Clinic knows it is their duty to make sure an animal is going to have a responsible and good home.”

Waters had also said SVAS has hundreds of thousands of grant dollars to physically go into the pound and help it become a no-kill facility.

According to Heisler, the pound is not high-kill and will only release animals to a responsible home or shelter after the three days in which the pound legally owns the animal.

“So far SVAS has proven time and time again that they do not fit those criteria, so this privately owned business has every right to decide that they will not allow them to pull from those animals,” said Heisler. “That is not something to bash, that is something to commend our city and our rescues on how wonderful they are doing to find these animals new homes.”

Heisler says many people have contributed to the design of the new SVAS building. Pointing to this page, she says SVAS has three paid city contracts and in that way receives government funds.

Race is on for Minot Public School Board