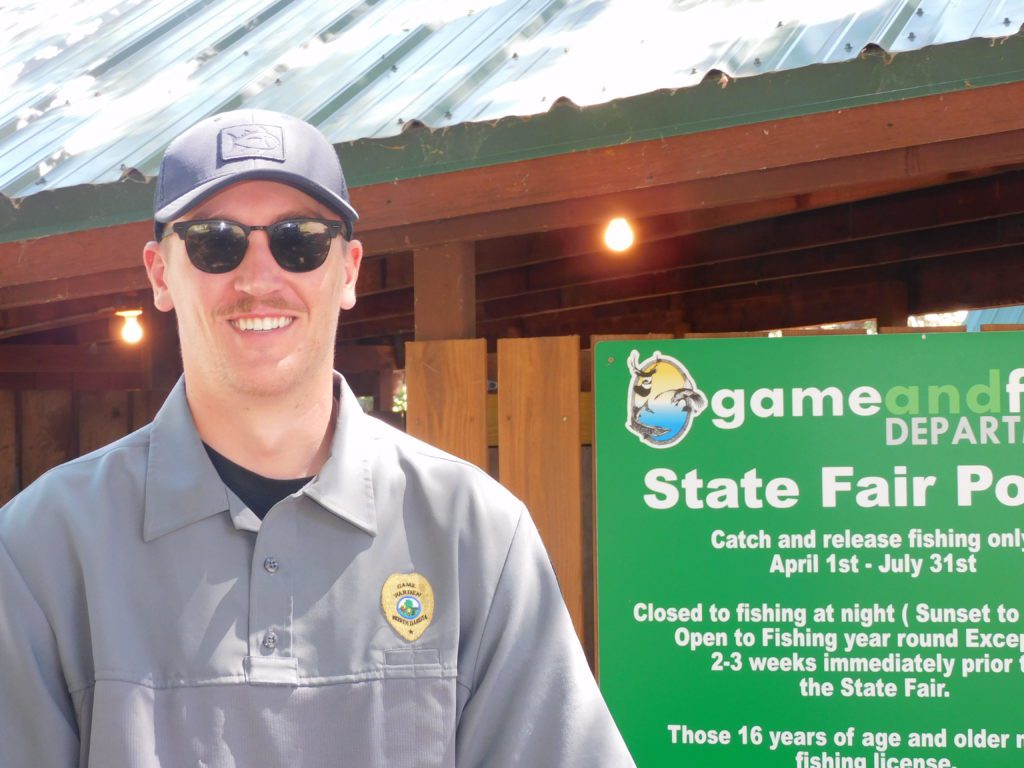 MINOT – One of the people helping youngsters on the fishing pier during the recent run of the North Dakota State Fair was Clayton Edstrom of Killdeer.

Edstrom was wearing his North Dakota Game and Fish Department uniform, smiling, and assisting young fishermen bait a hook and unhook fish caught. He was obviously enjoying the opportunity to interact with anyone on the crowded pier -- not surprising at all for a man who enjoys his work for Game and Fish.

“My office is sometimes my boat, so I spend a lot of time talking to people,” said Edstrom. “Being in a boat doesn’t feel like work to me. It’s a lot of fun.”

While Edstrom enjoys serving the public, he also knows that game wardens have the responsibility of making sure people stay safe on the water. That involves regular interaction with fishermen and boaters.

“I’ll check fish and licenses first off, to see how many fish they caught, making sure they are within the limits,” said Edstrom. “I also check for life jackets, a horn or whistle, fire extinguisher, a throwable cushion. That’s all part of the safety check.”

Edstrom noted that this year has been a busy one in his area on the south side of Lake Sakakawea, with many boats on the water every day and plenty of fish being caught.

Soon the state transitions into the fall hunting seasons – upland game, waterfowl, and big game. Edstrom says the state’s game wardens make sure they know the rules before encountering hunters in the field.

“We go over the Century Code and the proclamation, make sure we are up to date on all of it,” said Edstrom. “Sometimes there are changes and we want to make sure we know them before we go out into the field and inform the public.”

One of the issues this fall, said Edstrom, is disease in the state’s deer herd that affected several deer gun hunting units.

“A lot of people are aware of chronic wasting disease and epizootic hemorrhagic disease. A lot of people have returned tags for that,” said Edstrom. “If you are deer hunting in a unit that didn’t have CWD or EHD prevalent last year, I think you’ll be just fine.”

Making a Difference: Men on Ice