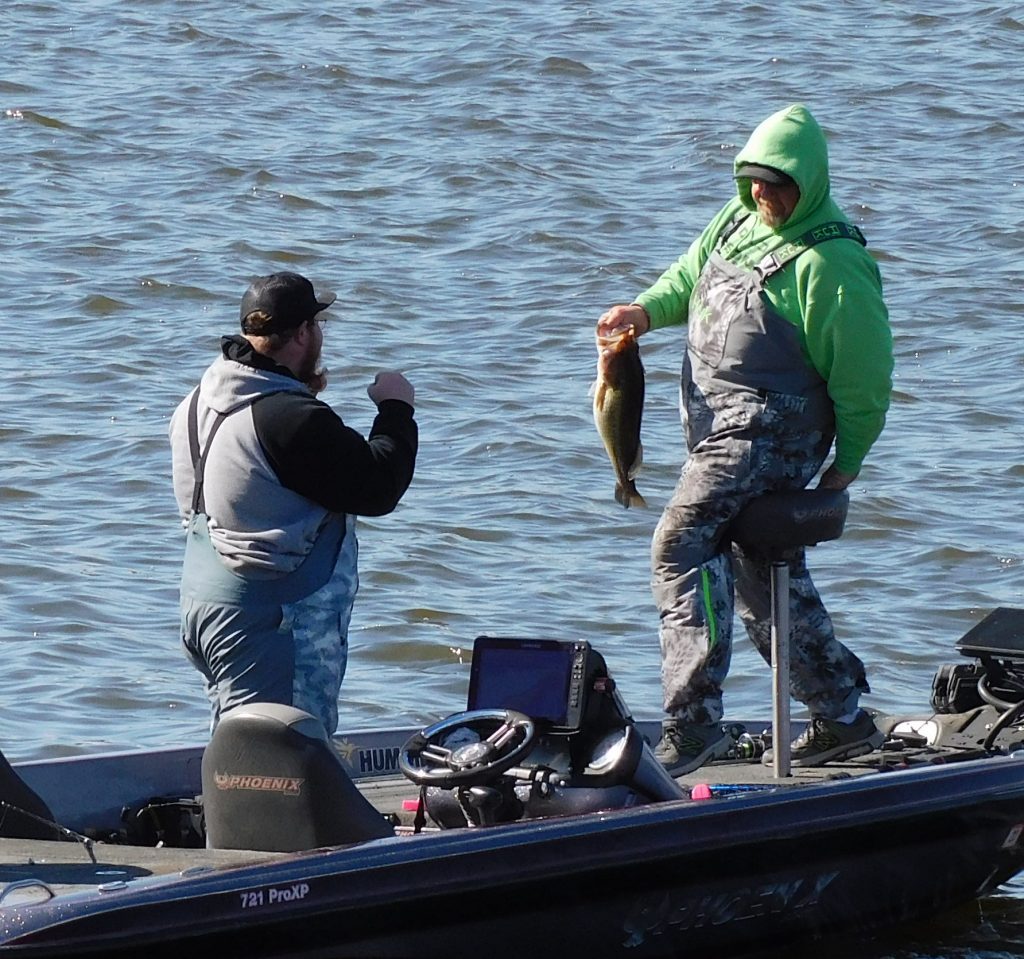 John Wadsworth, Dickinson, holds a dandy largemouth bass, 21.25 inches, pulled from the warm water of Nelson Lake on March 19. He and his son were fishing in a head-on-head elimination tournament that concluded the Badlands Bass Bandits winter circuit. [Photo: Kim Fundingsland/The Dakotan]

John Wadsworth, Dickinson, holds a dandy largemouth bass, 21.25 inches, pulled from the warm water of Nelson Lake on March 19. He and his son were fishing in a head-on-head elimination tournament that concluded the Badlands Bass Bandits winter circuit. [Photo: Kim Fundingsland/The Dakotan]

March Madness on the Water

STANTON – A bass fishing version of bracketology was introduced at Nelson Lake this month. And what fun it was!

The event was the culmination of a winter fishing circuit conducted by bass fishing enthusiasts of the Badlands Bass Bandits, a fishing club that made its debut in the state in 2006 and has been going strong ever since.

Wait a minute. Bass fishing in the winter in North Dakota, from a boat?

Nelson Lake in Oliver County doesn’t freeze over in the winter, thanks to a power plant that utilizes water from the lake for cooling and then returns the warmed water back into the lake, raising the water temperature well over the freezing mark. What’s more, the lake is teeming with largemouth bass, making it an ideal destination for open water fishermen seeking to shorten the off-season by launching a boat rather than drilling holes in the ice.

This season was the second go-round for the Ice Series. It proved popular enough its first year to try it again. Unlike the 2021 series, the 2022 series dates were plagued by high winds and very cold air temperatures. However, that wasn’t the case for the final event on March 19. Temperatures warmed into the upper 50s, making for a nearly perfect day to be on the water.


The March 19 finale introduced a new format to competitive bass anglers – head on head brackets. Each boat, with up to three fishermen per boat, was paired with another for two hours on the water. At the end of a two-hour period boats compared their combined length of their two longest largemouth bass. Only winning boats advanced in the loser-out format, a sort of March Madness on the water.

“People thought it was cool,” said Kyle Okke, Dickinson, tournament organizer. “Overall, very positive comments from the fishermen. They thought it was a unique, challenging, but fun format in which to compete.”


The event was a catch-and-release format. Anglers utilized the increasingly popular “Fish Donkey” app to record each fisherman’s catch. Fish were measured, photographed, and released. Each boat had access to results as catches were posted throughout the day.


As the day progressed and teams were eliminated, there was excitement surrounding the championship pairing. When that two-hour session came to a close it was the team of the Bullinger brothers, Brandon, Logan, and Ryan, from Bismarck, that claimed top honors.

“It was a fun tournament format, because there was a lot of strategy involved and the need for saving good spots for the finals,” said Logan Bullinger. “It was harder to win, because the fish you caught didn’t count for the next period.”


The Badlands Bass Bandits 2022 Tournament Trail begins May 14 at Lake Tschida and concludes with the Classic Championship September 10-11 at Dakota Waters on Lake Sakakawea. More information can be found at badlandsbassbandits.com.

Rules for Thee and not for Me