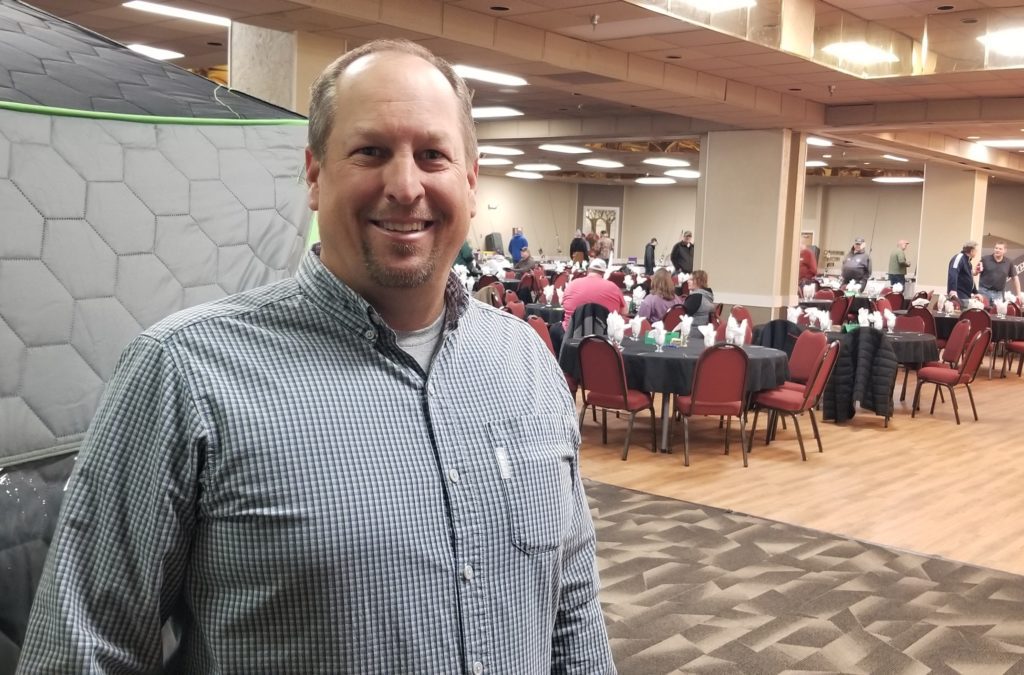 Brett Waldera, president, Fargo-Moorhead Muskies Inc., is an avid muskie fisherman who encourages fellow anglers to give back to the resource. [Photo: Kim Fundingsland/The Dakotan]

Brett Waldera, president, Fargo-Moorhead Muskies Inc., is an avid muskie fisherman who encourages fellow anglers to give back to the resource. [Photo: Kim Fundingsland/The Dakotan]

FARGO — The room was filled with excellent fishermen. As such, only the reckless told tales of catching monster fish, many of them, some too long to measure. Ah, it is best to know and respect your audience.

A boastful angler expecting praise or a retort such as where or on what lure, was universally greeted with a sideways glance or someone simply saying, “prove it.” If the reply was, “The picture is in my phone somewhere,” the jeers at the table were heard throughout the room.

It was all in fun, of course, during the annual fundraising banquet hosted by the Fargo-Moorhead chapter of Muskies Incorporated earlier this month. The FM group was the second Muskies Inc. chapter in the county. Today there are 77.

“The first one is the Twin Cities chapter,” said Brett Waldera, FM Muskies Inc. President. “We were founded, I think, in 1971. This gathering is our 44th annual fundraiser. We've been working with North Dakota Game and Fish and Minnesota DNR for many, many years.”

Waldera has been involved with FM Muskies since 1999. Since 2002 the chapter has donated over $150,000 to various conservation efforts and charitable organizations.

Situated on the North Dakota/Minnesota border, FM muskie anglers are within a short driving distance of some well-known muskie fisheries. It wasn’t always that way. Waldera has witnessed the evolution of muskie fisheries in the area.

“In the 80s we didn’t have muskie opportunities nearby. Now we have them right in our backyard. Yes, we’ve got great fisheries with an hour of Fargo-Moorhead,” said Waldera. “Big Detroit at Detroit Lakes is arguably one of the best muskie fisheries in the nation, maybe just past its peak now. Pelican is another great fishery. Sally has a muskie population that has developed over the last 30 years and is a really good fishery as well.”

FM Muskies Inc. has helped purchase muskies for the stocking program in North Dakota’s Lake Audubon. Muskies there are pushing fifty inches in length, a trophy for any muskie angler.

“Our chapter is really excited to see what’s going on with Audubon,” said Waldera. “That is really an upcoming fishery. It’s a phenomenal piece of water. I guarantee you Audubon will be a destination for muskie anglers across the nation. It might not be quite yet, but I strongly believe it will be.”


Lake Audubon has a growing population of both pure and Tiger muskies. Tigers are a sterile cross between muskellunge and northern pike. A big Tiger in Audubon today is anything above 40 inches, with many fish in the mid-40s reported last summer. Pure muskies caught and released at Audubon, though fewer in number, have measured 45+ inches.

It seems inevitable that 50-inch fish will be caught soon, perhaps as early as this summer, even as more young muskies are added to the fishery.

Muskie fishermen are few in number, a group dedicated to spending long hours on the water in search of big fish. Almost all have converted from fishing for other species. As such, they know muskie fishing is not for everybody. However, they’ll readily admit, muskies have an unavoidable lure of their own.

“They are just such a unique fish. They grow big and everybody who fishes them enjoys catching the biggest fish possible. I think that’s part of it,” said Waldera. “There’s also the follows and mystique with them, what they do at boatside. You can really see the personalities that the fish have. The trophy aspect really gets the juices flowing.”

Anyone wishing to become a member of Muskies Inc. can do so online at muskiesinc.org and choose which area chapter you would like to join. Individual membership is $45 per year.

Jacob Grabowski, Fargo, Jeni Bou Baits and On the Pond Outdoors, has been guiding muskie fishermen for several years. Last year he put an astonishing 74 muskies in his boat, guiding primarily on lakes in western Minnesota, not far from the North Dakota border.

“We had seven over 50 inches with 52 ½ being the biggest,” said Grabowski. “July was my best month, but August was pretty good too. Primarily we fish all artificials in the summer, then do some live baiting in the fall.”


Grabowski is known among muskie anglers for his meticulous work building bucktails. His Jeni Bou Baits are constructed in color patterns that are proven muskie catchers.

“I get a lot of custom requests from all around the country,” said Grabowski during the recent Fargo-Moorhead Muskies Inc. fundraiser. “I’ve sent baits to Montreal, Ottawa, Lake of the Woods area, the East Coast. I build a lot of colors, sticking with colors that have been historically productive.”