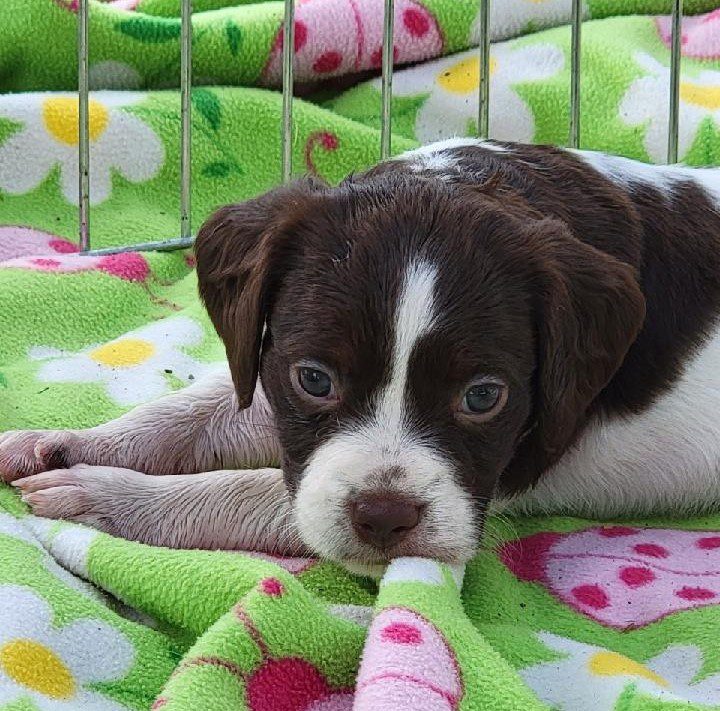 This little liver-and-white Brittany will soon join a household with Hunting Maniacs Eider and Garnet. In the challenge of picking a name, the question is if she’s Meadow, short for meadowlark the state bird of North Dakota and her home state of Nebraska. Or is she a Monster or Magnum??? She’s already plotting against ladybugs. (Photo: Jennifer Pollman)

This little liver-and-white Brittany will soon join a household with Hunting Maniacs Eider and Garnet. In the challenge of picking a name, the question is if she’s Meadow, short for meadowlark the state bird of North Dakota and her home state of Nebraska. Or is she a Monster or Magnum??? She’s already plotting against ladybugs. (Photo: Jennifer Pollman)

Our family – my husband, myself, a brother-in-law, and nephew - have an alphabet chain of dog names for our Hunting Maniac Brittanys we’ve been blessed with over the years.

We started the tradition innocently enough, naming our first dog Britt. It was a great call name in the field. And what else does one name a Brittany? Granted, it’s not extremely original or clever – and other relatives regularly reminded us of that fact.

My brother-in-law named his first Brittany Amber and what followed began our alphabet chain.

After countless teasing about the lack of originality with the name Britt, my little female Brittany was named Chessa.

Tough to beat that for originality, right?

The chain took a hop, skip, and jump when we rescued a four-year-old Brittany named Honey.

Oh, gosh, Honey was worthy of being the subject of a book but that’s another story for another day.

At that age we didn’t want to change her name but trust me – never, ever name a hunting dog Honey. It just doesn’t sound right in the field, plus when the name is on a rescue dog that liked to run as far and fast as she could, calling for Honey at any point just isn’t right.

Especially if it included some unkind words.

But back to the alphabet chain. As long as there was a skip in the link, my brother-in-law’s next Britt became Libby, short for Liberty. He had no choice but to name her that, he explained. As a pup she always sought liberty from the house, leash, or whatever else prevented her from hunting.

OK, with three names in the chain – A for Amber, B for Britt, and C for Chessa, it might be difficult to call it an alphabet chain with Honey, which was changed to Huni (short for Hungarian partridge) and Libby. It really got out of whack when Pika joined the family.

But we always had the strong belief the alphabet chain could be linked together. It would come to fruition over the years as Denali (the Alaskan national park), Eider (Arctic nesting duck), Franchi (named after the firearms manufacturer), Garnet, and Isla filled in the gap that began with Huni’s arrival.

Precious Jade was truly a gem and Kimber, well Franchi can’t be the only firearms manufacturer in the family.

Over the years we’ve filled A through L. They’ve all been amazing, wonderful family dogs and equally amazing, wonderful hunting dogs. Each can never be replaced, nor would we even consider the addition of another Britt a replacement.

Those thoughts have been resonating with us greatly this summer when Jade unexpectedly crossed the Rainbow Bridge. Through tears I sobbed to my brother-in-law that I couldn’t imagine him without his dog.

And he couldn’t either.

That’s why Kimber joined his family.

Another link in the alphabet chain.

It’s something we’ve pondered as we watch our 13-year-old Eider, a cardiology patient at Iowa State University’s veterinarian clinic. She’s doing remarkably well and doesn’t look like a senior dog with a heart condition.

Garnet would be perfectly happy being the only dog in the house, but we can’t imagine life without each of us and our dogs.

So we’re going to be a three-dog family for what we hope will be for several years.

We’ll go to Nebraska to get the new Hunting Maniac pup but in the meantime the name game has been an ongoing discussion – almost as challenging as naming a baby.

It has to be a good call name in the field.

And, of course, to keep with the now linked alphabet chain, there’s no doubt it will begin with “M”.

In conversing with the breeder, she’s told us – jokingly, I hope – that she’s ornery. “She’s a pistol. You’ll enjoy her and cuss her, too,” she said.

We thought about Meadow, short for Meadowlark, because western meadowlark is the state bird for both North Dakota and Nebraska.

But – while we won’t name her this – the name Monster keeps ringing in my mind. Or maybe if she really is that pistol, her name should be Magnum.

Hopefully that ornery pistol translates into another amazing Hunting Maniac, whether she’s Meadow, Magnum, or Monster.