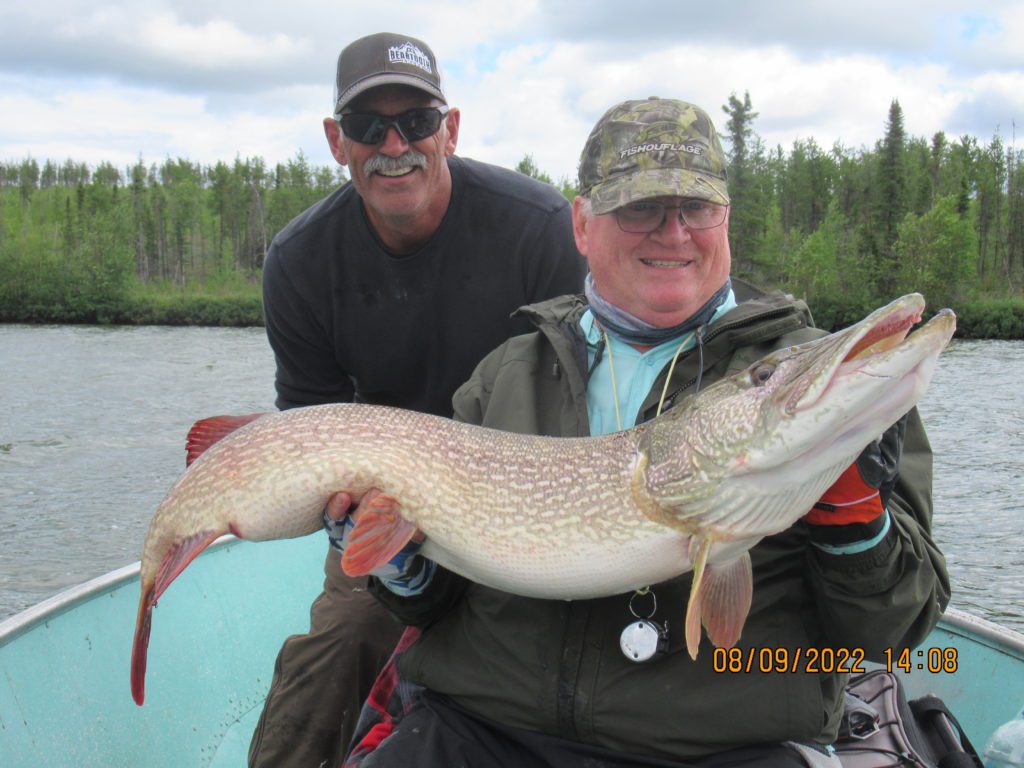 The author with his fish of a lifetime. (Photo: Tom Pabian)

The author with his fish of a lifetime. (Photo: Tom Pabian)

What follows, dear reader, is a tale of a big fish.

This story would go unpublished were it not for the urging of fellow workers. Okay, one fellow worker who threatened to have one or more writers interview me for what he perceived as story of great universal appeal to readers throughout all seven continents, on ships at sea, even the international space station.

I thought the idea of being interviewed about a fish I caught was a bit too pretentious, far beyond my humble nature. So, I determined to do something even worse – write about it myself.

Perhaps this is how an outdoor writer disgustingly reels in readers under the guise of disdaining what is certain to be considerable and unavoidable praise and applause, and the dominant subject of talk at parties and coffee gatherings throughout the region and beyond. As I hope I have carefully explained, none of this is of my doing. It is with great reluctance that I broach the subject at all.

It was a dark and stormy night, in a land far away, a long, long time ago. Intriguing, huh? Read on, dear reader. Read on!

Tacky. Very tacky. My apologies. It wasn’t a dark and stormy night or a long, long time ago. But it was far away, at an unnamed lake in northern Saskatchewan. As I’m sure you understand, all fishermen have secrets, even as big as a lake.

I will release myself from embellishing this tale as only a fisherman would cleverly do. The truth it shall be! Mostly, at least. I leave it for you, treasured reader, to fill in the blanks as you wish.

There were three men in a boat, a small but reliable craft, and I was one of them. Perhaps, I’ll add, maybe the most accurate source of information about the astonishing event we were about to encounter.

Credit must be given to Rob Holm, a durable angler from Riverdale, who boated a magnificent northern pike – just over 25 pounds. It was I who photographed this uplifting moment which was followed by high fives all around and a few whoops of joy.

Holm’s broad smile was nearly as long as the fish he held for a seemingly endless pose. I congratulated him warmly, hiding my jealousy as best I could, while comfortable in the knowledge that the fish could be topped and that I was the ingenious angler that would do it – and right soon too.

It wasn’t but a few minutes after releasing Holm’s fish back into the water and watch it swim away, that I made a superb cast with a homemade bucktail that was met with a thud, sort of like hooking into a weight set. But set the hook I did. Instantly I knew this was a monster of the deep even though we were in about eight feet of water.

There was no give. Whatever I had hooked into was staying down. I was in for it, no question about that. In that moment my thoughts were about the strength of my fishing rod, line, leader, snaps, split rings, sharpness of hooks, and reliability of knots connecting everything together. Big fish are the ultimate test of equipment.

After I ascertained it would certainly require the assistance of my reliable companions, I alerted them that I had a beast on the line. They, quite naturally, tossed a few prickly barbs my way before they came to the conclusion that this was no false alarm.

The battle, if you will, was not particularly lengthy, unlike the fish that would soon be pulled from the water. It was however, rather daunting in that I knew I wanted this fish in the boat. Sure I was going to release it, but I had the feeling that it could be the largest northern pike I’d ever hooked.

When it finally rose in the water near the boat, I couldn’t believe its size. The head was massive. The gill plate immense. I watched closely as my formerly doubtful companions lifted the horse from the water.

Now, dear reader, here is where my incredible story lacks what some would think is “verification”. You see, we put the fish on the scale but it wouldn’t register a new weight, only the weight of the fish Holm had landed a few minutes earlier. This despite the fact that the fish was longer, had incredible girth, and an obviously fierce disposition.

Several attempts were made to ascertain a proper weight, but to no avail. As much as I wanted to verify the accurate weight of my historic catch, returning the fish to the water was, for me, a higher priority.

So, there you have it. The absolute truth.

What I can add is that I’ve had the good fortune of handling three other northern pike exceeding 30 pounds, the largest weighing 31 pounds. My fish was bigger. I’m guessing at least 32 pounds, but I have only a photograph as proof.

That I released the fish just in time was evident when it turned on its side in the water, floating as if dead. I reached down carefully, grabbed onto a fin, and turned the magnificent fish upright. It was infinitely pleasing when it responded with a tail kick and a dive. The fish, like I, was exhausted.

Now, for those who wonder how such a feat could be accomplished, I’ll share the details of equipment I have come to rely on when fishing northern pike, especially when encountering many fish and big fish.

My leader material is Devil Line, made by Hitena. It is remarkably flexible wire line material that ties with ease, simple overhand knots, and will stand up to the teeth of northern pike, muskie, even barracuda. I prefer 80 pound test.

For those of you who are walleye fishermen tired of losing lures to northern pike, Devil Line is the answer. It won’t impair the action of even small crankbaits, provided too large of a snap is not used.

For multiple pike, or big pike, a sturdy snap is a must. My fishing is all done by casting lures and I generally go with a cross-lock snap. If in doubt about the size of a snap to use, go bigger. All you are doing is pulling a lure through the water. Don’t worry about fish being snap wary.

Bucktails with a single blade, usually No. 8 or No. 10, are my favorite pike presentations. All pike, large or small, will strike them. Keep in mind that bucktails with large blades can be a lot of work to retrieve, so choice of reel is important. I go with a 6.3 gear ratio. Higher speed reels make bucktail fishing quite tiring and speed is not always good. Big pike don’t like to chase, at least not more than short distances.

Keep hooks sharp. I carry a file with me when I’m fishing for that very purpose. Don't overlook it. I learned the hard way, losing big fish to what I judged to be dull hooks.

Line choice for fishing pike, for me, is 55-pound Samurai braid. It’s the toughest, smoothest, most castable braid I’ve ever used, and I’ve tried many of the lines on the market today. Understandably, your opinion may differ, but I’ll stick with Diawa’s Samurai.

My bucktails are all homemade, which is fun to do and adds another aspect to every catch. Making them is not difficult and allows an angler to be as creative as he or she wishes to be. It’s also a good pastime during the winter months.

Bringing Light to the Darkness

Raising Children in Midst of Adversity

Hunters Encouraged to Have Deer Tested for CWD