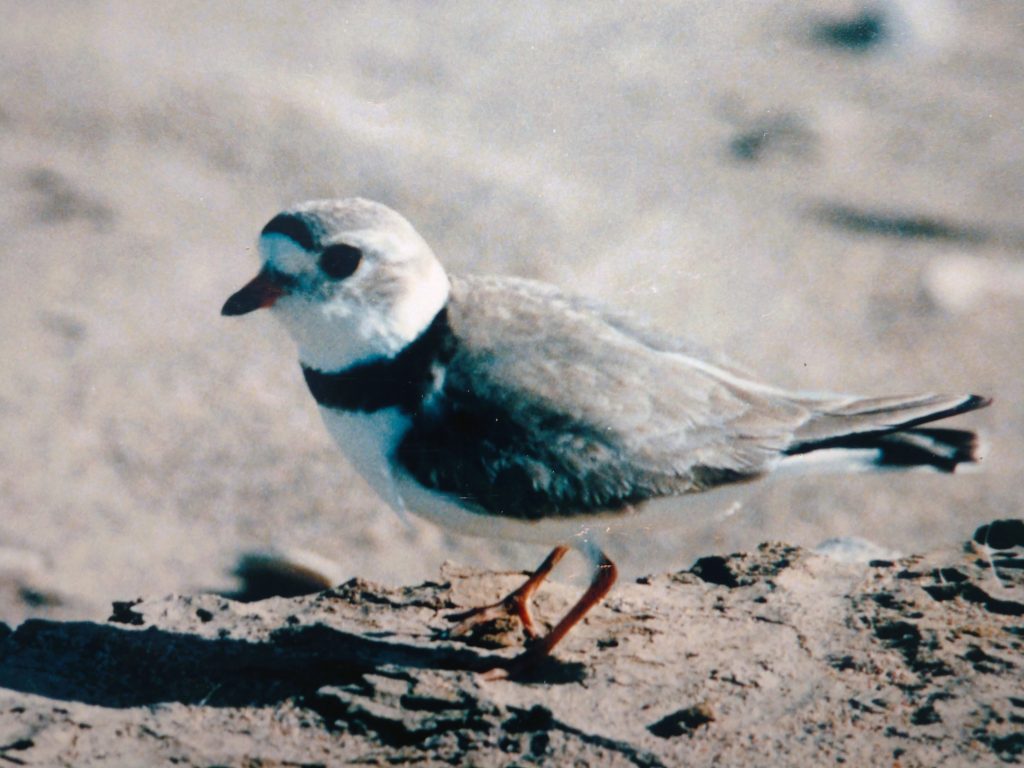 The piping plover is a federally threatened shorebird nesting along alkali lake edges. The Nature Conservancy’s John E. Williams Preserve in McLean County is a Globally Important Bird Area because it has one of the largest breeding concentrations of piping plovers in world. [Photo: Patricia Stockdill]

The piping plover is a federally threatened shorebird nesting along alkali lake edges. The Nature Conservancy’s John E. Williams Preserve in McLean County is a Globally Important Bird Area because it has one of the largest breeding concentrations of piping plovers in world. [Photo: Patricia Stockdill]

The boisterous chirping was treasured morning music as the two Hunting Maniacs of the household and I started our early morning walking routine – they pretending to “hunt” along the muddy trail and me hoping they didn’t get too filthy in the process.

The mud was welcomed even though it came from the hands of two hard-hitting blizzards.

The boisterous chirping was equally welcomed for it meant my purple martins were finding their way back home. They’re late – about two weeks late, in fact – but that’s OK because it meant they didn’t get whacked by the blizzards like everyone else here did.

Tree swallows joined in with their chorus as they sailed and swirled overhead, announcing their belated return.

Their nesting boxes are clean and ready; awaiting the arrival of more of their brethren.

Out on the prairie other birds are moving in and through to the heartbeat of spring migration and nesting. Some will stay and call this home while others pause for a brief respite before continuing northward.

Birding and wildlife enthusiasts have celebrated spring migration on the second Saturday of May since 1993 with an event called International Migratory Bird Day. It evolved into two events with a global celebration of birds and migration now called World Migratory Bird Day – traditionally in May and again the second Saturday of October as many birds return to their wintering grounds.

But it takes habitat for animals of any type to survive, including birds. That’s why people erect purple martin nesting structures, especially because martins east of the Rocky Mountains depend on human-provided housing.

That’s why people put up nesting boxes for birds such as wrens, tree swallows, bluebirds, and other species.

And that’s why it’s critical to provide adequate nesting and brood-rearing habitat out on the prairie, along wetlands, and the woods for species nesting on the ground, in shrubs, and in trees.

The Audubon Society launched its Important Bird Areas (IBA) program in 1995 to identify, monitor, and conserve important bird habitats in conjunction with managing agencies on public land and participating private landowners. Becoming an IBA, whether Globally Important or State Important Bird Area, isn’t simply because an area is neat and has birds.

Instead, a technical committee studies science-based criteria, looking at bird species population status, habitat, and other criteria. In the process, the goal is to also educate the public about the importance of habitat.

Northwestern North Dakota provides opportunities for people to visit and enjoy the sights and sounds of some of the bird species that make those areas special: For example, local U.S. Fish and Wildlife Service National Wildlife Refuges with GIBA designation include Des Lacs near Kenmare, J. Clark Salyer near Upham, Lostwood north of Stanley, and Upper Souris National Wildlife Refuge northwest of Minot.

Some migration activity may have been delayed by winter’s blast of weather but it’s still a busy time of year for birds. They’re on the move and readying for nesting, whether it’s boisterous purple martins in one’s yard, the hidden song of a grasslands sparrow on a National Wildlife Refuge, or the brilliant cheep of a rare piping plover along an alkali wetland on a nature preserve.

Get out and celebrate the migration – and it doesn’t have to just be May 14, 2022 World Migratory Bird Day.

Save Big on Cleaning Supplies