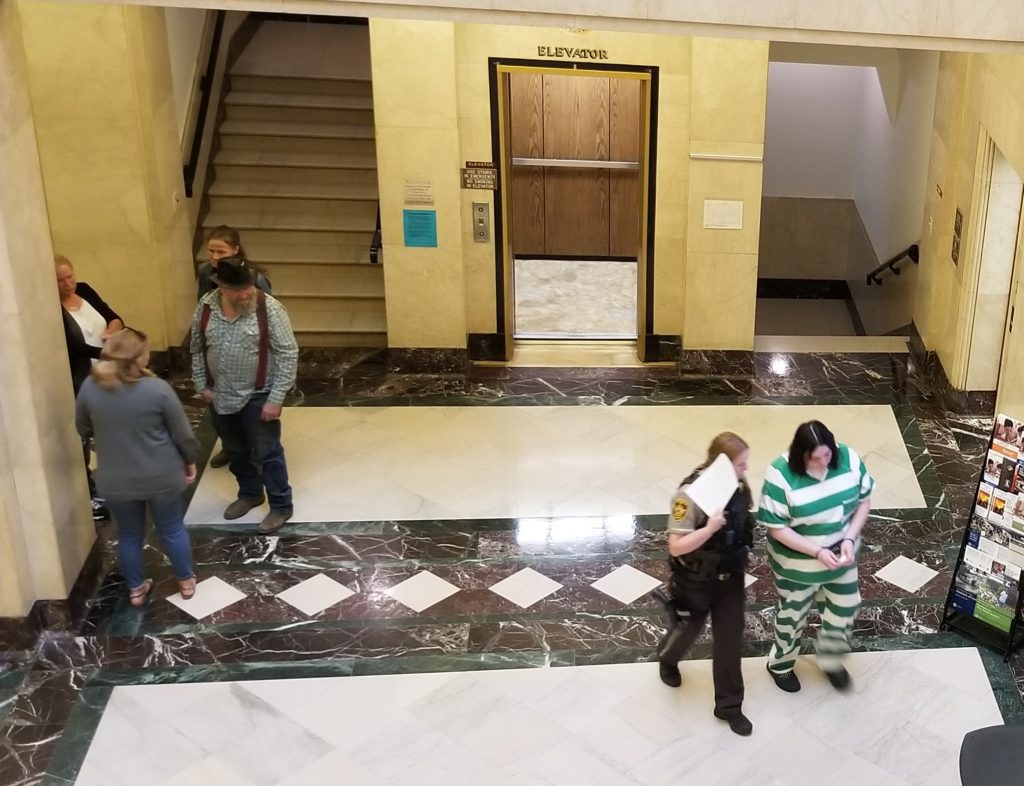 MINOT – Whitney Racine, 35, Minot, was sentenced to 18 months in the State Penitentiary during an appearance in a Minot courtroom Friday, August 26.

Racine was arrested and charged with Facilitation of Murder-Extreme Indifference-Adult victim, on February 25, 2022. The charge is a level C felony, punishable by a maximum of five years’ imprisonment and a $10,000 fine.

In agreeing to the sentencing recommendation of the State’s Attorney, North-Central District Judge Todd Cresap directed his remarks at Racine, saying, “What you did was despicable. I can’t wrap my mind around it. You are responsible. You admitted your role in it.”

According to Minot Police, the events of the fateful night that led to the death of Wade Goodale, 42, Minot, began in a local bar in which Racine, Matthew Anderson, and Goodale were all present. Investigators say Racine contacted Goodale via Facebook messenger, inviting him to her residence for drinks. When Goodale arrived at Racine’s residence a vehicle immediately pulled in, blocking Goodale’s vehicle.

A man police say was later identified as Matthew Anderson got out of the second vehicle and approached Goodale’s vehicle. When police arrived on the scene at 2:12 a.m., they found Goodale unconscious, in the driver’s seat of a blue Honda Accord. It was determined Goodale had an apparent gunshot wound. He was pronounced dead at Trinity Hospital at 3:14 a.m.

Investigators say Racine wanted to have Goodale beaten because she was mad at him for having a dispute with his wife. Before leaving the bar Racine advised Anderson, who had voiced his desire to beat up Goodale, that she had invited Goodale to her house. And, say police, Racine met Anderson in the roadway near her house prior to Goodale’s arrival.

According to a declaration of facts filed with the court, Racine admitted she wanted a beating to happen but didn’t want to witness it, so went inside her home. Furthermore, say police, Racine did not attempt to stop the assault, did not render any aid to Goodale, or call 911.

Anderson, 35, Minot, is the man police say shot Goodale after a failed attempt to remove him from his vehicle. As a result, Anderson has been charged with a AA felony, Murder-Extreme Indifference, punishable by up to life in prison without parole. He is also listed by the court as a co-defendant of Racine.

During Friday’s emotional court session, among those who spoke was Goodale’s mother. Fighting back tears, she said, “That was the worst day of my life. My son was taken from me. Now I listen to Wade’s children cry about how much they miss their dad.”

Defense Attorney Kyle Craig told Cresap that, “Whitney does feel a massive amount of remorse. This has absolutely devastated her.”

In a plea for two years of probation following the completion of Racine’s prison term, Craig told Cresap that, “She’s provided valuable information to law enforcement.”

Anderson has a pretrial conference set for September 28, at 10 a.m. in front of Cresap.

Arrest Made in Homicide