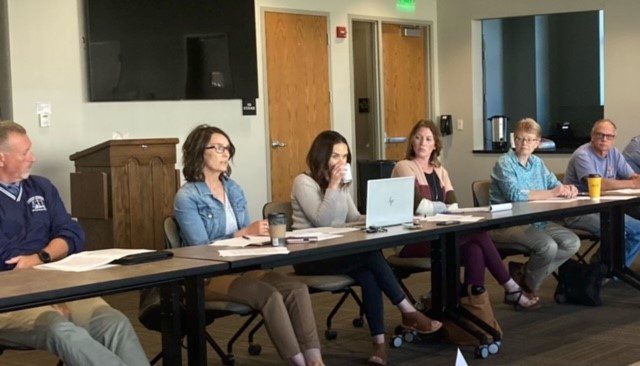 Members of the Elmer Jesme Conference of Counties vote to meet the fourth Tuesday of every February and August. (Lydia Hoverson/The Dakotan)

Members of the Elmer Jesme Conference of Counties vote to meet the fourth Tuesday of every February and August. (Lydia Hoverson/The Dakotan)

MINOT – As days can get busy, one conference decided to cut back on its number of meetings per year.

Members of the Elmer Jesme conference, a quorum of county representatives in North Dakota, voted Tuesday in the Ward County Administration building to meet twice a year every even-numbered years, and three times a year on legislative years..

This would not include special meetings that can be called at any time. Members said items such as the American Rescue Plan Act dollars and attendant care could warrant special meetings.

The vote came after a survey was presented to the members, where most people surveyed voted to meet twice a year.

Elmer Jesme members plan to meet the fourth Tuesday of every August and February.

“I think blighted properties would be a great topic,” said Ward County Commissioner Shelly Weppler. “Maybe it’s too late at that point, but I’d really like to hear what everybody does with blighted properties or if we even have them. And inflation rate would be good to discuss, what everybody’s doing with inflation and what staffing is looking like.”

Another member suggested the topic of grant opportunities for businesses.

The members also voted to draft guidelines on what month to elect new officers and how to run the meetings.