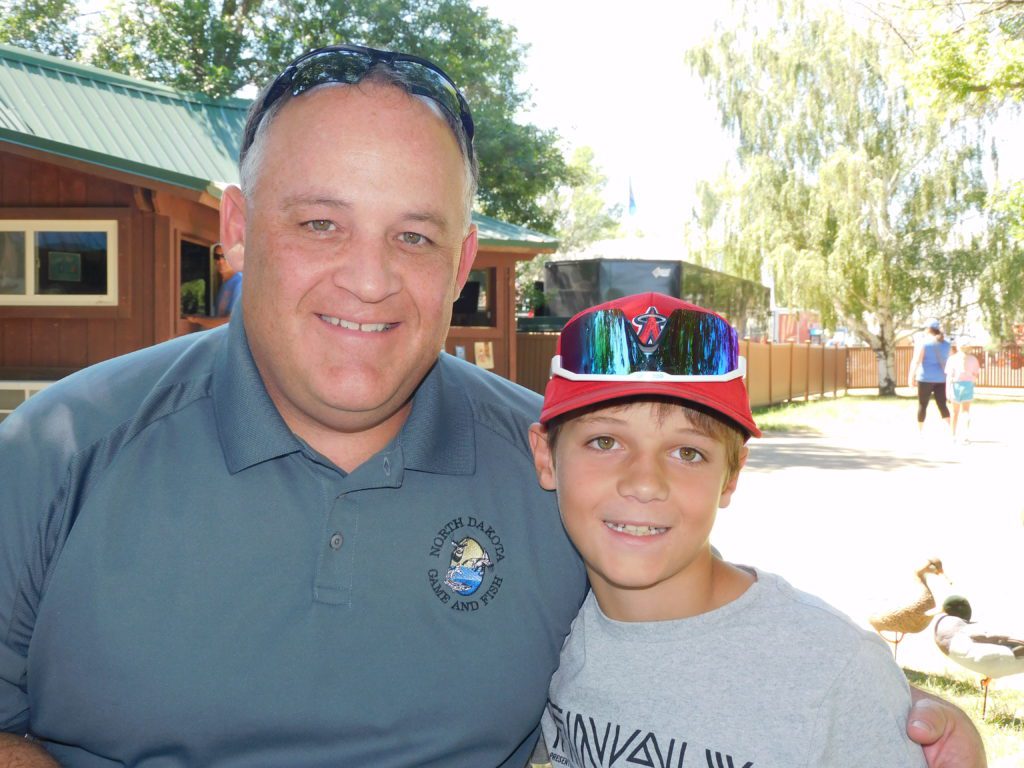 Williams visited with The Dakotan during a recent visit to the Conservation and Skills Park at the State Fair.

THE DAKOTAN – What is your assessment of Game and Fish involvement here at the State Fair?

WILLIAMS – It's awesome and been around a long time, first in 1994 I believe. We’ve had a long relationship with the fair and the public. It’s something people are attracted to when they come to the fair, wetting a line or just getting some shade.

THE DAKOTAN – So, is the fair a good time to interact with the public?

WILLIAMS – No doubt about it. That's obviously who we serve. The State Fair is extremely well attended by people from the state, and out of state, so it gives us an opportunity to connect, which is certainly something we like to do. Connecting with people in the state is at the top of our priority list all the time.

THE DAKOTAN – You've been in the director’s position for a few months now. How do you view the transition?

WILLIAMS – I have done a little reflection on that and, first of all, it’s been great. It’s been a lot of fun, just being involved with all things fish and wildlife related.

I was in the wildlife division for a number of years, pretty focused in that area, but it’s a lot of fun to be involved in everything associated with the department. That's something I really do like.

Probably some of the challenges with it is juggling, balancing a lot of requests. There’s a lot of things you want to be involved in but there’s just not enough hours in the day. Fortunately, we have a very qualified and excellent staff here in the state that you can rely on.

Obviously too, family. That's the one thing I don’t compromise on. When it comes to certain family things, I make sure I’m still there for them.

THE DAKOTAN – Is it becoming more difficult to get people involved in the outdoors, fishing or hunting?

WILLIAMS – That's the challenge. It’s hard to have a real clear picture of what’s going to happen. We’re really fortunate here in North Dakota that we haven’t seen the trends yet that some of the other states have. Maybe we’ve got a few blinking lights in some areas.

From the hunting aspect, obviously, the number one thing we hear about is access, right? And we know that. Ninety-three percent of of the state is privately owned, so access in certain parts of the state can be a challenge.

Fishing? Access is not a challenge. Everybody has access to the fishing lake, whether it be shore fishing or boating opportunities. We have some of the best fishing right now that we’ve ever had in North Dakota.

All we can do is continue to expose people to the outdoors in a variety of ways, promoting our fish and wildlife resources and the responsible use associated with those resources.

THE DAKOTAN – You came from the Wildlife Division, but now oversee the entire department. How’s that adjustment?

WILLIAMS – There's certain times of the year when your internal calendar just knows, okay, we’re flying pronghorn surveys now. How did those go? There’s a learning curve, informational pieces I’m able to be a part of in the department. That's been so much fun.

THE DAKOTAN – What’s the status of various programs that project a positive message about habit and the future of hunting?

WILLIAMS – I'm glad you mentioned habitat. We know our department. We are always trying to improve the habitat on the landscape for our fish and wildlife resources. We have to.

We are challenged in North Dakota for the loss of grassland habitat, CRP or actual native grassland. We can do little things. It doesn’t have to be massive projects. If landowners are interested, say 20 to 25 acres of something they want to put back into grass that they’ve been cropping for a number of years, but it hasn’t been real productive, yet ties in with what we know is a good wildlife area. We want people to know there’s options out there.