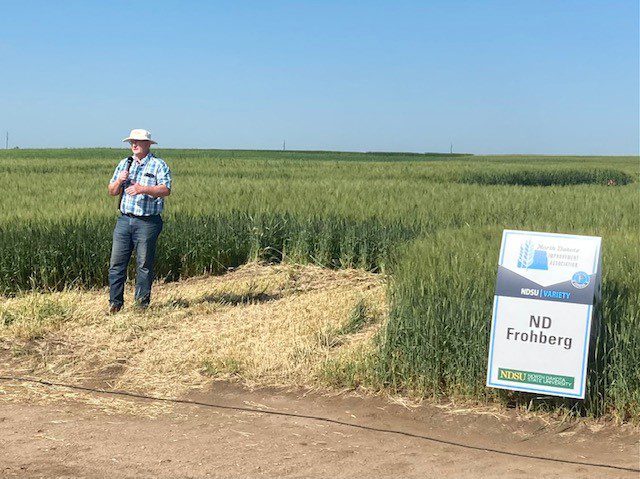 Brian Jenks, a weed specialist from the North Central Research Extension Center in Minot, speaks at the NCREC’s Field Day on the best way to get rid of Kochia. (Photo: Lydia Hoverson/The Dakotan)

Brian Jenks, a weed specialist from the North Central Research Extension Center in Minot, speaks at the NCREC’s Field Day on the best way to get rid of Kochia. (Photo: Lydia Hoverson/The Dakotan)

One specific kind of weed, Kochia Scoparia, has taken its toll on many crop fields in North Dakota, according to Brian Jenks, a weed specialist from the North Central Research Extension Center in Minot.

“If we’re not controlling Kochia in our burn down, that is a serious issue,” said Jenks. “We have seen that happen this year quite a bit. So, what else can we do if we have Roundup-resistant Kochia? We’ve got other options, however in the western part of the state we grow many different crops. So I can’t give you one answer to solve the Kochia problem, or all wheat problems, because every crop is different.”

One herbicide that is used a lot for Kochia, 2,4-D, is not as resistant to Kochia as it once was, according to Jenks. Another one, called Dicamba, can be used in front of some crops such as dicamba soybean, but cannot be used in front of most as it will injure them.

“Gramoxone is still extremely effective on Kochia,” said Jenks. “Not a favorite herbicide to work with, but because of the closed system now that you have to work with, with Gramoxone, it is safer to use. It has been by far the most effective product for Kochia.”

Jenks’ take-home message is to apply these herbicides when the Kochia is three inches or less.

“I know you want to wait until all the weeds are up, but we are seeing if you are waiting for four to six inch Kochia, we’re missing the Kochia,” Jenks explained. “You can see examples where Kochia’s getting above the canopy or we’re spraying bigger Kochia, there’s no escaping. So we need to really target, whether it’s wheat or whatever you’re spraying, target three inch Kochia. We get to four, and we’re starting to lose.”

Jenks said his advice would be to look for products with two effective modes of action and target the weeds that are three inches or less.

“I’m concerned about our ability to burn down the weed if we’ve got Roundup-resistant Kochia,” said Jenks. “You’re going to have to be on top of your spray applications in a timely manner. Use Valor in the fall to suppress Kochia that’s submerging in the spring.”

This method has worked every year according to Jenks, except for this year, which he attributes to the 40 plus inches of snow that hit many parts of the state in April.

“I think it just moved the herbicide out of the germination zone,” Jenks explained.

Jenks spoke of the difference between Gramoxone and Reglon.

“They are not equal,” said Jenks. “Gramoxone is much more effective on Kochia than is Reglon. If we happen to lose Gramoxone in the future, we’re not going to be happy with Reglon as a replacement. For Kochia, you can use Metribuzin. In corn, if you’re growing corn, you’ve got the dicamba products in corn. Don’t rely on Roundup anymore to control Kochia.”

Jenks said Dicamba is not 100% effective as there is Kochia resistant to it.

“Dicamba is a tool, but it isn’t going to be able to be used in all situations,” said Jenks.

Democratic-NPL has its Candidates