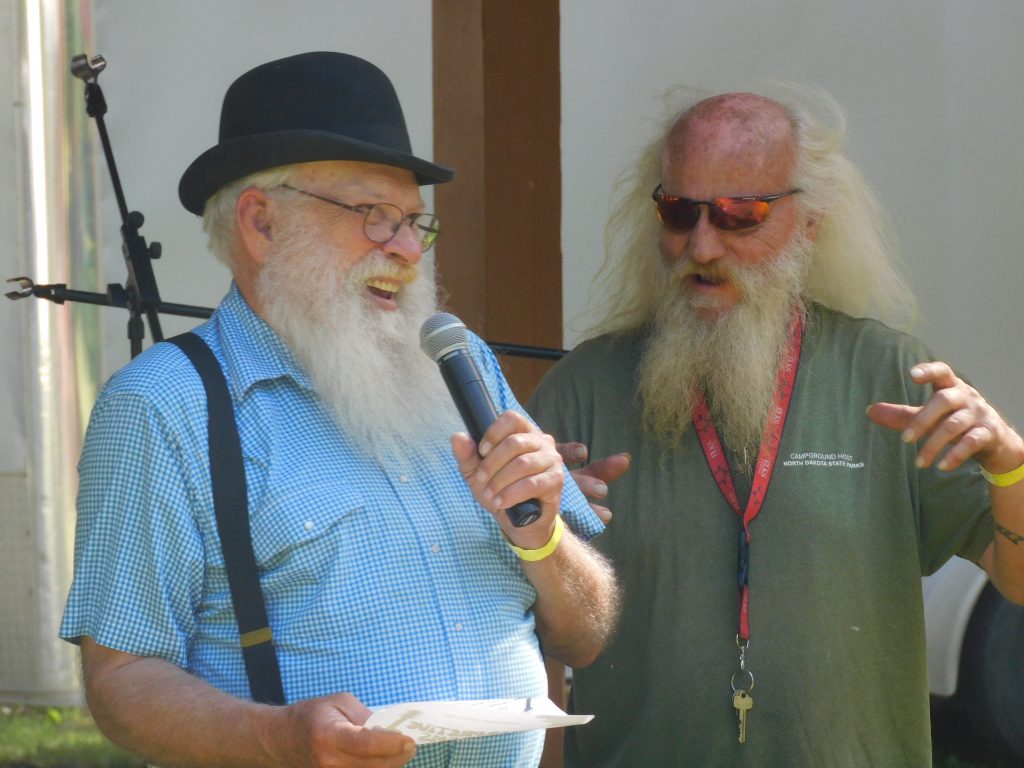 Bluegrass in the Trees

CENTER — The rustle of leaves in tall cottonwood trees complimented dancing feet, all in tune with the rhythmic beat of an assortment of entertaining bluegrass music. Welcome to the Missouri River Bluegrass and Old Time Music Festival at Cross Ranch State Park.

“The setting is the most beautiful part of it all, among the cottonwood trees here along the Missouri River,” said Jill Wiese, Washburn, festival organizer. “It’s absolutely the most perfect setting.”

The festival was held June 17-18, the 30th time it has been held at Cross Ranch. The event was cancelled in 2020 and 2021 due to COVID concerns. This year’s return was met with enthusiastic musicians and spectators alike.

“People are really excited to get out here. The bands are excited too,” said Terry Mitchell, park manager, while watching people streaming from the nearby campground, folding chairs in hand, heading for a comfortable spot in front of the stage.

Cross Ranch State Park is an ideal setting for the event. Despite temperatures in the mid to upper 90’s, the shade provided by the cottonwood trees made it very comfortable to sit and listen to the sounds of the banjo, bass, guitar, mandolin, and harmonica.


“Down here in the river valley those tall, old cottonwoods makes it feel like home. Bluegrass music?It's original. That music speaks to you down here,” added Mitchell.

During an open stage session, host Rick Wengel, Minot, paused during his introduction of a band getting settled on stage. The delay was to let a train pass on a nearby track so the clackety-clack wouldn’t be competing with the picking and singing on stage. Wengel has been active in the festival since its inception 32 years ago.

“The love is the music. It’s kind of a homemade music,” said Wengel. “It’s just fun to get down here on a day with nice weather, just sit and listen to music all day long. It’s a blast.”


Bluegrass music is most often associated with the Appalachian Mountain country in the eastern United States, but its appeal is universal. Tapping time to bluegrass tunes is unavoidable.

“People love hearing it. Some for the first time,” said Linda Schwartz, festival treasurer. “It’s all about stories and the past.”


Several different bluegrass groups performed at this year’s festival, rotating one-hour sessions on the outdoor stage Friday evening and all-day Saturday. In addition, two bluegrass groups, the Wood Picks from Thief River Falls, Minnesota, and The Waddington Brothers from Regent, conducted free workshops in the park for anyone who desired to learn a bit more about bluegrass, even learn a bluegrass song.

“The workshops might be my favorite part of the festival,” said Wiese, a bass player for the popular bluegrass group Cotton Wood in addition to her duties as festival organizer.

Wiese credits a lengthy list of reliable and enthusiastic volunteers for helping make the festival a success.

“They are great volunteers who really have the spirit to put this on,” remarked Wise. “And it’s just priceless to have the support of our sponsors.”