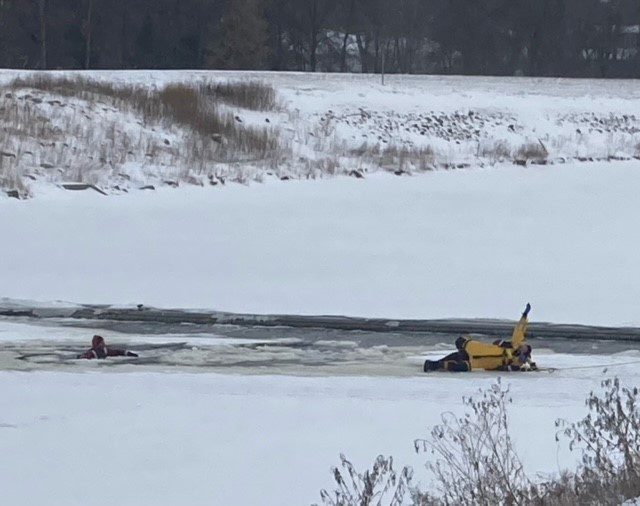 MINOT – The fire department is preparing for rescues on ice this year, seeing ice danger as a bigger threat than some may realize.

Jason Babinchak, Minot Fire Department battalion chief, said people falling through ice is an extreme danger, and the department gets calls for people or animals falling through the ice a few times a year.

The Fire Department conducted its annual ice rescue drill last week on the Souris River near Oak Park, where about 60 personnel were trained on rescuing people in ice.

“We put a simulated victim, one of our personnel, in a special suit out there, tied off, and then we send our people out there in ice rescue, cold weather suits, we send them out to get the people out of the water,” Babinchak explained. “We reach, then we’ll throw, then we row, then we go.”

The rescuers start with reaching out with a long pole, tool, or branch, but if the victim is too far away, they attempt to throw a rope to him or her. If that proves unsuccessful, the rescue team sends someone out in an inflatable boat.

“We tie them off with a special ring buoy,” said Babinchack. “They help them get out of the water, and people on shore pull them in. We’ll obviously have the ambulance come and get them treated medically.”

Babinchak said the first couple of weeks to a month after a freeze is the most dangerous time to be on the ice.

“If it’s snowing when the ice is forming it makes worse ice than if it’s just nice and cold,” Babinchak explained. “Same thing with the wind and temperatures, if they go up and down, it can make for some really unstable ice.”

Six inches or more of ice is what the fire department prefers before people walk on it.

“Kids go out there, they like to play hockey or slide on the ice,” said Babinchak. “If people that are walking don’t want to walk to the next bridge they’ll cut across the ice and there can be a danger. Pets will fall through the ice and someone will try to go get their pet.”

Babinchak said for most of the rescues where the victim is above the surface, the survival rate is good.

“If they’re actually under the water then it determines how long they’ve been and the conditions,” said Babinchak. “We just ask people to stay clear of the river, observe from the riverbanks, and not go over the banks for a few weeks until they’re good and solidified. Definitely stay away from the dams above and below them at least fifty yards. It can be dangerous all year, but the next few weeks are pretty critical to stay away as much as you can.”