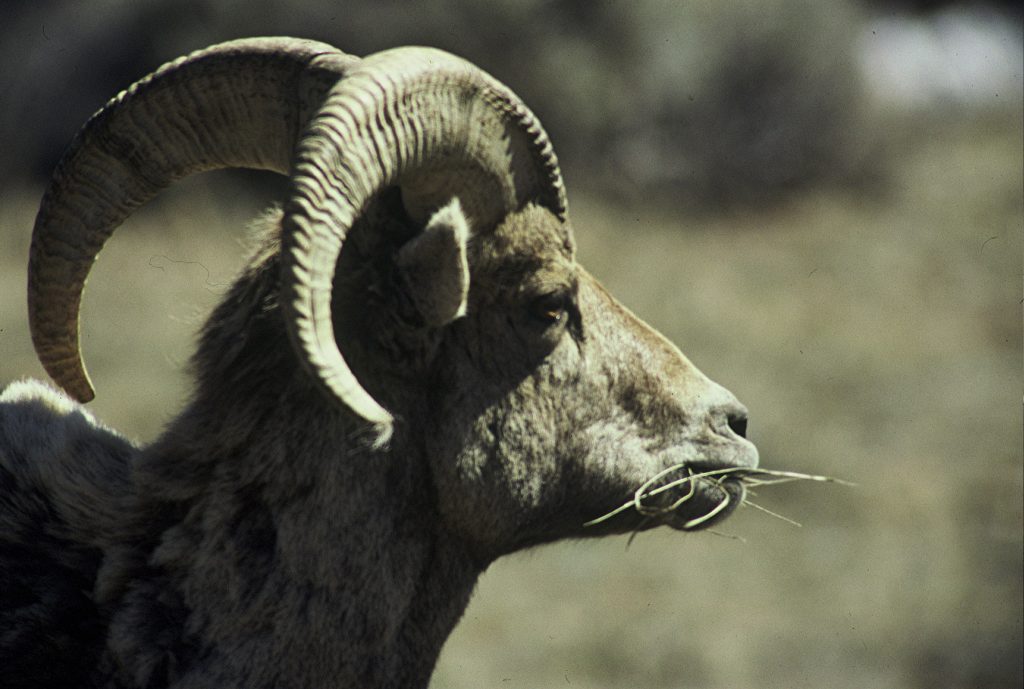 The late Dr. Valerius Geist, Professor Emeritus in the Faculty of Environmental Design, University of Calgary, was the first scientist to study Stone’s sheep native to northern British Columbia.

Expecting to find “some modest scientific gain…”, as he described years later in his book, Wild Sheep Country, instead, he wrote: “I had, unknowingly, embarked on a journey from paradise lost to paradise found. I had not anticipated that.”

Northern British Columbia is hundreds and hundreds of miles from North Dakota.

Its expansive, glorious, and sometimes – perhaps even oftentimes – treacherous mountains are a far cry from North Dakota’s bentonite clay buttes of its Badlands.

A small slice of North Dakota is home to another wild sheep, Rocky Mountain bighorns.

They – all four subspecies – each in their own way could be considered part of the Paradise Found Dr. Geist discovered in the 1960s.

As he was alone.

Defining the word “treasure” as well as the phrase “paradise found” is purely subjective.

Our personal treasure in Paradise Found wasn’t in British Columbia. It was in North Dakota’s Badlands the summer my husband drew a once-in-a-lifetime bighorn sheep hunting license.

We watched and studied.

We observed lambs as they grew bigger and bigger as summer drew closer to autumn.

Admittedly, we also watched for rattlesnakes, which, luckily for him, likely wasn’t an issue for Dr. Geist.

We knew how to discern the difference between animal and clay - an animal whose coloration melded so tightly with the earthen \hues that to the casual observer it would seem nary a bighorn existed among the Badlands buttes.

But we knew they did.

We knew their movements, their mannerisms.

At times, it seemed as if they knew us.

Whether or not the 2022 North Dakota bighorn sheep hunting season - and if so, how many licenses will be available – will only be determined after population surveys are conducted later this summer and factoring in additional data.

But one can always hope to discover the treasures of Paradise Found if applying by the March 23 deadline.

Should a person beat the massive odds of getting a license, envision sitting alone on a mountain, alone yet not alone, watching wild sheep.


Then circle back to one’s setting in North Dakota: Sitting on a barren bentonite clay butte, leaning against a wind-blown rock – only after searching to ensure the absence of prickly pear cactus,  slicing edges of a yucca plant, and rattlesnakes.

And then realize bighorn sheep are one of the few wildlife species who feed on yucca, reaching inside among those slicing edges to dine on its inner stalk as if it were pulling out a gentle stalk of celery.

Realize their vision is so extraordinary that they will see you long before you see them. Think about their strength and muscles as rams butt heads in a show of dominance, the noise and intensity of each blow reverberating through the air with each hit.

It would later become the Gladys Lake Ecological Reserve.

Maybe it should have been named Paradise Found.

In looking back, perhaps a North Dakota bighorn sheep hunting license isn’t merely a once-in-a-lifetime opportunity to hunt the Badlands for a sheep.

Maybe it really, truly is an opportunity understand the true treasure of Paradise Found.

Not mountains. Not bentonite clay.

But the animal – the treasure that is wild sheep.

Should you get "food storage"?