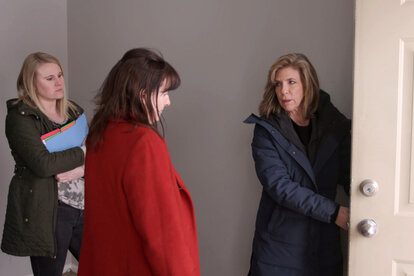 MINOT – A national television show investigative team is credited with murder charges being filed in one of the highest profile murder cases in this city’s history. However, the subsequent arrest of Nichole Rice, accused of murdering roommate Anita Knutson in 2007, has been slow to progress through the legal process.

Rice was arrested on March 17 of this year, made an initial appearance in court, and was released on $120,000 bond. A preliminary hearing in the case was initially set for April 21, but finally held Sept. 8 where Rice entered a not guilty plea, setting the stage for a highly anticipated trial.

Judge Richard Hager set a pre-trial conference for October 12, which was reset to November 16, and, finally, December 21. The delays are not particularly unusual, especially considering the severity of the charge and the 15 years that have passed since Knutson’s body was discovered and an arrest was made.

The second of two, one-hour episodes of the crime series Cold Justice, focusing on the Anita Knutson murder, aired Saturday, Oct. 8 on the Oxygen Network. The program, which features veteran investigators working cold crime cases throughout the country, systematically eliminated suspects in the Knutson murder mystery until concluding that Rice was the responsible party.

In announcing Rice’s arrest, Minot Police Chief John Klug said, “With the help of Cold Justice, we were able to move forward” and that “a lot of it isn’t new information.”

“I think just pulling all the information together and putting it in an order that made sense, refocusing and paying attention to the fine details,” said Klug. “I can’t get into the details of everything, but again, there were a few details that came up.”

Cold Justice pointed the finger of blame at Rice, with particular focus on the dead bolt lock on the north hill apartment shared with Knutson. It was Knutson’s father, Gordon, who discovered her body. He did so through an open window adjacent to Knutson’s bed. The door to the apartment was locked.

A maintenance woman was summoned to unlock the deadbolt to gain entrance to the apartment. The doorknob had no locking mechanism, meaning whoever committed the murder must have locked the door behind them when leaving the crime scene. Reportedly there were only four keys to the door, two in the possession of property maintenance, and one each for Knutson and Rice.

Investigators determined early on that the open window, the screen of which had been cut, was not used as an entrance or exit point due to the lack of any other visible signs of disturbance to dust on the windowsill or to items sitting beneath the window.

Furthermore, according to Cold Justice, blood found on the cut window screen belonged to Anita Knutson. Evidence they say means the killer stabbed Knutson, then cut the screen, unknowingly transferring Knutson’s blood while intending to throw investigators off the track.

There remain a number of unanswered questions, the answers to which may or may not be revealed in a courtroom. Among those are who owned the knife that killed Knutson? Why was the knife left carelessly at the crime scene? Was the killer alone? Is there someone else that has knowledge of the murder? What are the details that came up referenced by Captain Klug?

“To even have this much happen is very gratifying,” said Karen Leier, Anita Knutson’s aunt. “We don’t have to wonder anymore, just about the outcome, not the arrest. I know we are going to have a trial, so that’s helpful.”

If the pretrial conference set for Dec. 21 occurs as scheduled, a trial date is expected to be set, likely in the first quarter of 2023.