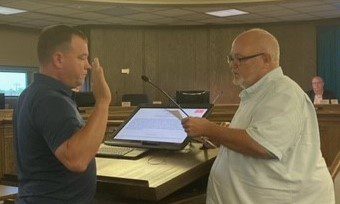 Roscoe Streyle, Minot, a banker at United Community Bank and former legislator in the state House of Representatives is sworn in by Mayor Tom Ross. (Photo: Lydia Hoverson/The Dakotan)

Roscoe Streyle, Minot, a banker at United Community Bank and former legislator in the state House of Representatives is sworn in by Mayor Tom Ross. (Photo: Lydia Hoverson/The Dakotan)

The council voted four to two in favor of Roscoe Streyle, a banker at United Community Bank and former legislator in the state House of Representatives, to fill the empty alderman seat.

Streyle was nominated by Alderman Paul Pitner, and was the only candidates nominated out of 13.

Council members Stephan Podrygula and Carrie Evans, the two no votes, raised concerns over Streyle’s previous controversial social media posts on the handling of the COVID-19 pandemic as well as the use of the words “clowns” and “idiots” for some involved. Both members were also concerned over his past use of the word “libtard”.

Both council members said they believe Streyle has the skills to serve on the city council, but voted against him due to his past statements.

“One of the things you learn on city council is you don’t get your own way,” said Podrygula. “We all have to work together and be non-partisan, and we also have to be respectful, even if we disagree with one another.”

“I am convinced that Minot needs Roscoe on our team, to help us fast track, to help us save the money that we can save in this legislative session,” said Ross. “I’ve had some heart-to-hearts with him. You can’t change the past, you can only build on the future.”

“Everybody in their life does and says some things they regret,” said Streyle in response to the two council members’ reasons for voting against him. “I’m no different from anybody else, I’m not a perfect person by any means. I thought the characterizations were not exactly fair. It is what it is, history is history. I’m a forward, glass half-full person. So let’s move forward and accomplish something for Minot and its citizens.”

Streyle’s appointment is temporary, but his position will be voted on by the public in the November 8 election. He shared his goals for his next few months on council and possible years if he is elected in November, confirming he plans to run on that ballot.

The 12 other candidates who applied for the position, including  Zach Raknerud, a sales manager in Minot who had previously run for city council in June for the three positions that are currently occupied by council members Paul Pitner, Mark Jantzer, and Lisa Olson.