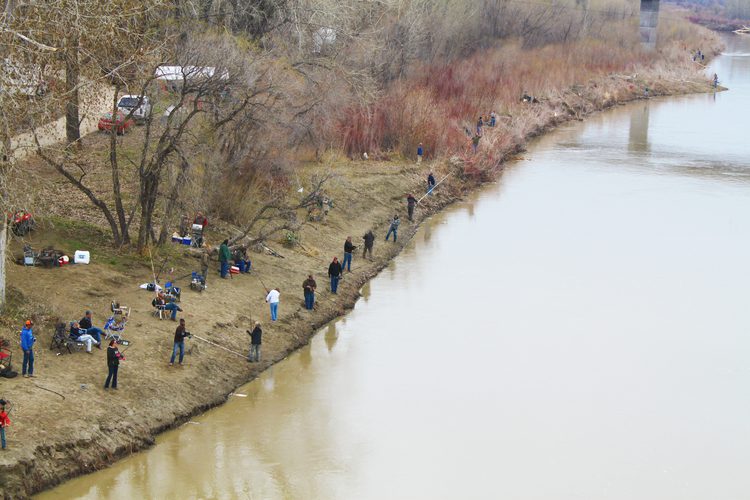 They’re a treasure, a living fossil surviving millions of years found in only one part of North America.

And some call North Dakota home.

They’re paddlefish, a massive, prehistoric fish scientists trace back to the Cretaceous Period 65 million years ago.

Only one other paddlefish species found in Asia exists outside of the large, slow-flowing freshwater Mississippi River Basin, which includes portions of the Missouri River.

Perhaps paddlefish can be appreciated as another example of the uniqueness that is North Dakota: Fascinating in appearance, paddlefish are unlike other fish species in the Missouri River System, which includes the river itself along with an 18-mile stretch of the Yellowstone River in northwestern North Dakota, Lake Sakakawea, and Missouri River below Garrison Dam widening into Lake Oahe below Bismarck.

Appearance-wise, they appropriately earn their common name because they’re graced with a large paddle on their face in front of their eyes and mouth. The paddle serves a critical function: Its darkish dots detect electricity generated by its microscopic zooplankton prey.

The paddle helps a paddlefish focus on its dinner - zooplankton - as it swims. Zooplankton is filtered out of the water into its wide-open mouth by close-set gills along the mouth.

That’s how a fish that can weigh more than 100 pounds devours its microscopic morsels.

Paddlefish lack bones. Instead, their skeleton and paddle are made of cartilage, just like a shark.

Their coloration varies from blue-gray to almost black with a lighter underbelly. They can reach more than seven feet in length.

Another unique aspect to paddlefish it that scientists believe a third “eye” on top of its face helps them identify the amount of sunlight filtering through the water. The “eye” doesn’t form images like a normal eye, however.

Paddlefish aren’t shaped like other fish species, either. Instead, the top of their body is generally flat. They also have a deeply forked tail and – like sharks – have smooth skin and lack scales. Despite their size, they can swim about two body lengths per second and can occasionally become vertically airborne.

Paddles grow quickly on young paddlefish and almost seem disproportional to its small body until its body grows in relation to the paddle.

Perhaps befitting an ancient fish, paddlefish are long-lived, typically reaching 20 years of age and into their 50s.

The N.D. Game and Fish Department closely monitors paddlefish populations, coordinating their management with neighboring Montana. While they were likely never abundant in the Missouri River, its once free-flowing state was altered with construction of a series of flood-control dams in Montana, North Dakota, and South Dakota, diminishing their habitat and historic range.

Paddlefish spawn in the spring, laying eggs on silt-free gravel beds. Spawning in North Dakota takes place in the upper reaches around the Yellowstone and Missouri rivers west of Williston. After spawning, they spend summer months in slack water of the two rivers, moving into Lake Sakakawea’s deep water in the winter.

North Dakota’s paddlefish population is stable enough to provide a limited season, which opens May 1.

Research shows paddlefish can survive being snagged when promptly and properly released back into the water, so North Dakota allows snag-and-release.

Special paddlefish-specific regulations apply, including the need for a paddlefish tag – residents and nonresidents, alike. Tags are only available online and must be in possession while snagging or catch-and-release. Go to the Game and Fish Department website for additional regulation details.

An Evening of Fun