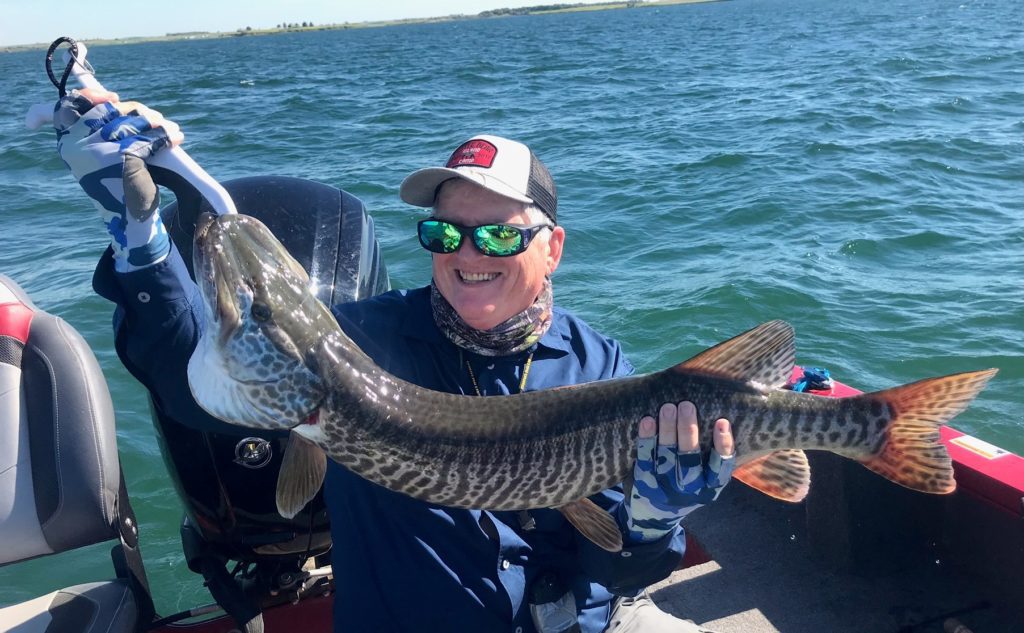 The author credits a change in tactics for putting this Tiger muskie in the boat at Lake Audubon. [Photo: submitted]

The author credits a change in tactics for putting this Tiger muskie in the boat at Lake Audubon. [Photo: submitted]

Here’s an angle to angling that is almost too quirky to admit. I am a cast counter.

No, I am not looking for any therapy or support group to help me with what many consider to be a weird problem. I like doing it and will continue doing it. Heck, I even learn a few things from it. Really.

Why bring this up during the hard water season in North Dakota? Go back to quirky and weird if you are seeking some rational explanation. Or, valued reader, read on if you dare.

It all started for me like one of those crazy songs you can’t get out of your head for a day, or two, or three. Several years ago I caught myself counting each cast during a day on the water and, try as I might, couldn’t help doing it. So, I just went with it, silently at first, at least until I blurted out that a fish I had just caught came on cast 142.

My fishing partner, who more than once had questioned my sanity regarding many other matters pertaining to fishing, responded with a curious look of disbelief and understanding. I could tell he thought I was on to something, something far more clever than he thought possible. Perfect.

Now all I had to do was produce an intelligent reply to prove that I was an ingenious angler who inadvertently blurted out a previously undisclosed secret to success on the water. The problem was, I did not have an explanation. The solution was, he never asked. Again, perfect.

Surprisingly, the subject never came up during the drive home from the lake. However, I knew it would at some later point and it would be best if I had a solid and reasonable explanation, or at least one vague enough, and confusing enough, to buy me a bit more time to respond. What I came up with was that I was compiling cast data to build a profile of my fishing days and effectiveness. Of course, I embellished that with a lot of serious angler talk about catch rate, presentations, reel ratios, feeding windows, moon phases, planet alignment, and such.

Since my seemingly silly habit was out of the net, so to speak, I added a clicker to my fishing equipment. That way, with a simple push of a finger seamlessly implemented into my casting motion, I could keep an accurate count of casts made without trying to count and carry on a conversation at the same time. Clever, huh?

In 2020 I had a stretch of fishing days that didn’t work out as planned. Frustrating, even. That’s when I took a real good look at my cast statistics. I’d always had a 25 to 50 cast limit for any particular lure, at least when pike or bass fishing. If a lure wasn’t working within those parameters a fisherman is probably not going to make it work either. At least that’s my thinking. But what about a few days of trying to sneak back to the dock unnoticed to avoid any discussion with fellow anglers who love to approach and ask, “Any luck?”

During three fishing trips to Lake Audubon, July 11, 12, and 16, 2020, I had one fish follow a lure and caught zero. I made 1,185 casts for muskie without catching a single fish. Up until then I had been having a great time catching muskies with almost ridiculous regularity on Audubon.

It was obviously time to switch things up a bit, and my cast stats proved it. I was doing what worked all year long until those few days in July. I had stubbornly stuck to fishing methods and depths that had been successful. Problem was, the fish were doing something different, and I was too slow to recognize it. Analysis of my previously silly casts stats now gave those number valuable merit.

Armed with this new information, that I had compiled for reasons previously unknown, I changed my tactics. On July 18, just two days removed from my third consecutive skunk on the water, I had one of my most efficient days fishing muskies on Lake Audubon -- two Tiger muskies, two big pike, making only 185 casts. The fourth fish was caught on cast 126.

Finally, I had found a use for counting casts. It was a sort of brick to the head moment, but I figured it out. Crazy enough, the dead spell came during what was a terrific year for me chasing muskies. 2021? Not so much. I’ve been poring over my casting stats to see if there’s any clues as to why.

Ahh! Muskie lore and wisdom! Solonar tables and moon phases and almanacs and secret lures. Maybe the only things quirkier than counting casts, yet perfectly understandable to a muskie fisherman. I guess I fit right in. My total casts for 2021, in 61 days on the water, was 15,784, an average of 259 per outing, down from 262 in 2020.