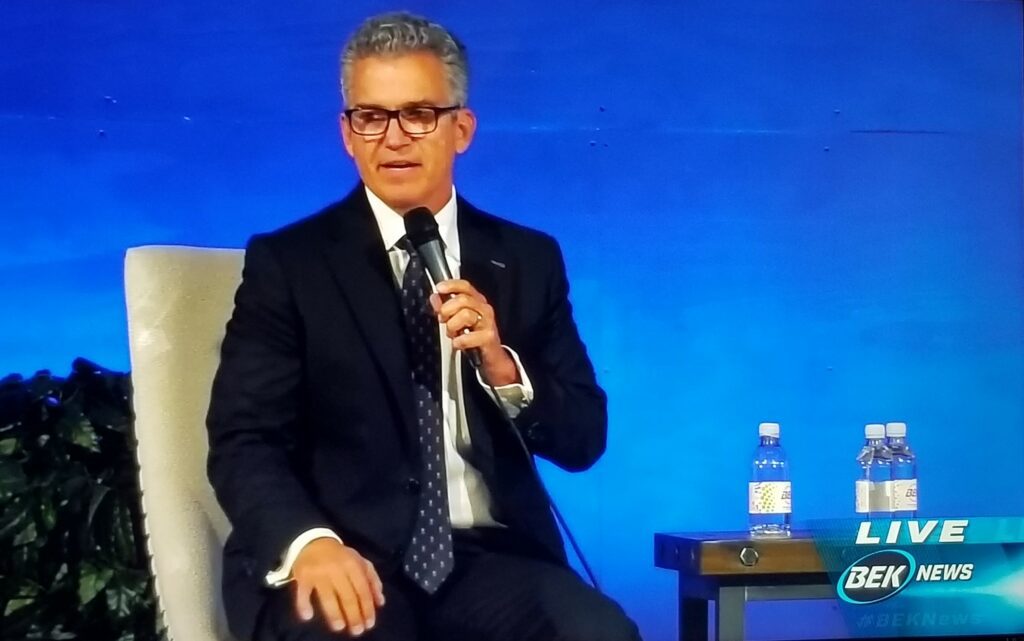 WASHBURN – What began as a pleasant exchange of ideas and positions ended with some very contentious moments. In between was frequent tongue lashing of Sen. John Hoeven, R-ND.

United States Senate candidates Katrina Christiansen-D, and Rick Becker-Ind., were on stage for a debate at this community’s Memorial Hall Monday night. Between them was an empty chair with a microphone lying on it, a constant reminder of Hoeven’s absence. The long-time North Dakota senator declined an invitation to participate.

Becker, a state Representative who staged a strong but losing challenge at the North Dakota Republican convention for party endorsement to run for Hoeven’s senate seat, decided to run as an Independent challenger for U.S. Senate in the November general election.

In his opening remarks Becker said he was opposed to “skyrocketing” spending by Democrats and fellow Republicans.

“I’m not worried about making friends, just wanting to get the job done,” said Becker. “Principle, boldness, and truth.”

Christiansen, an engineer and educator at the University of Jamestown, was asked why she was running for the Senate.

Christiansen responded, “I am not somebody that will accept failure. I understand the agriculture sector in North Dakota way more than a banker does. I have three children in public school. People are using offices to improve themselves, increase their wealth, and do nothing for their constituents.”

Becker said he saw “tremendous problems with the Biden administration” and had a goal of “achieving more liberty”, adding “People in North Dakota are looking for a genuine person who will represent them.”

The moderators for the evening were former Bismarck Mayor Steve Bakken and former State Senator Tyler Axness of Fargo. The debate was televised on BEK TV. The moderators noted the absence of Senator Hoeven, something the two candidates on stage did not ignore.

“John Hoeven not being here is a perfect example of what he is as a politician, politically safe, under the radar,” said Becker. “We need people to work and fight, and he hasn’t been there. This is classic, classic John Hoeven.”

“If he was here I’d ask, what do you do all day?” said Christiansen. “He’s sponsored seven bills that have passed in 12 years he’s been there. Hoeven has failed North Dakota constituents time and time again.”

The candidates were asked to respond to the on-going issue of the Chinese Fufeng group purchasing land near Grand Forks for the purpose of building a corn milling plant. Becker jumped on the opportunity to respond.

“Spying on America. A direct line of sight to Grand Forks Air Force Base. The thought process escapes me,” said Becker. “It is a clear failure of leadership by John Hoeven. He knew about it a year ago, complete and abject failure by John Hoeven.”

Christiansen, who called the state’s Public Service Commission “really a kind of joke,” and linked the recent hurricane that struck Florida to “global warming”, also took issue with Hoeven.

When the moderators turned to the question of North Dakota’s energy policy, what it should be, and the current administration “attack on oil and coal industries,” Christiansen was first to respond.

Becker said he opposed “subsidy schemes” for ethanol and wind and giving away taxpayer money.

“If it is going to work, they don’t need taxpayer money,” explained Becker. “Let companies do what they are going to do. I’m opposed to all subsidies. We shouldn’t take away from under them, but we should work away from subsidies. There is no doubt.”

Christiansen responded that, “I am not opposed to subsidies. They are probably appropriate.”

When asked about the passage of the infrastructure bill earlier this year by the U.S. Congress, Becker said he, “Absolutely would not have voted for Biden’s fake, green infrastructure deal. Hoeven crossed over and handed Joe Biden his biggest win of his presidency, a $1.2 trillion bill. Wholly unnecessary. It is egregious, political malpractice frankly.”

Both candidates expressed their approval of legalizing marijuana.

“It’s not a gateway drug,” said Christiansen. “The marijuana industry is really an innovative agency. It has medicinal impacts on people.”

“Marijuana has no victim,” said Becker. “It is far less dangerous than alcohol and is not physically addictive. I’m going to vote in favor of it. I don’t think there’s any issue.”

A hot button topic was the recent Dobbs decision handed down by the U.S.  Supreme Court, which turned the question of abortion back to individual states. In North Dakota the decision triggered a measure to make abortion illegal within the state.

“I did not agree with the Dobbs decision. I don’t think government should make women’s health care decisions,” remarked Christiansen.

In closing, Christiansen said, “I am a problem solver. I am motivated, tenacious, and want to do the right thing all of the time.”

Becker said, “I appreciate you had the gumption to debate in person, which we cannot say about John Hoeven. We need to end the status quo, not keep sending the same people back to Washington, D.C.”

The debate can be viewed in its entirety in the BEK TV archives at https://www.bek.news/programs.