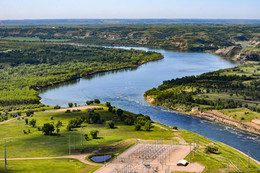 FARGO, N.D. (AP) — The Mandan, Hidatsa and Arikara Nation is accusing North Dakota officials of tampering with the tribes' efforts to collect royalties from oil and gas production underneath a riverbed on the Fort Berthold Reservation. The state says the tribes have no legal claim.

The latest grievance is part of an ongoing dispute that has seen the rights for minerals exchange hands four times in the last five years, the last time in February when the Biden administration ruled that the royalties belonged to the Three Affiliated Tribes. The money has been held in a trust fund.

The U.S. Department of Interior, which is overseeing the trust, gave the energy companies until the middle of August to provide a detailed account of royalties and bonuses from mineral production. The state responded with a letter to oil companies dismissing the ruling and title.

"Please be advised, however, that North Dakota owns and asserts its title to the historical bed of the river, and to the revenues from mineral production therefrom, and no authority to date defeats that title," North Dakota Solicitor General Matthew Sagsveen wrote to an oil company in an Aug. 24 letter obtained by The Associated Press.

Mandan, Hidatsa and Arikara Nation Chairman Mark Fox said the state is attempting to undermine the lawful rights of the tribes.

"The State of North Dakota continues to show their lack of respect for the legal precedents and people who have paid with their lives to preserve these fragments of our ancestral lands and water," Fox said in a statement.

At stake is an estimated $100 million in unpaid royalties held in trust and future payments certain to come from oil drilling beneath the river, which was dammed by the federal government in the 1950s. That flooded more than a 10th of the 1,500-square-mile (3,885-square-kilometer) Fort Berthold Reservation to create Lake Sakakawea.

It's unclear how many of the oil companies have responded to the Department of Interior's request. Timothy LaPointe, regional director of the Bureau of Indian Affairs Great Plains Region, did not immediately respond to an email request seeking comment.

Sagsveen's letter to the oil companies notes that North Dakota has filed court documents asking that the state be allowed to intervene in an unresolved part of the suit regarding the payout of royalties from the federal government to the tribes.

"No court to date has ruled that the MHA Nation owns the riverbed mineral interests at issue," the letter states.

North Dakota has argued it assumed ownership of the riverbed when it became a state in 1889, citing cases in which the U.S. Supreme Court has held that submerged lands were not reserved by the federal government. The Three Affiliated Tribes bases its premise on three previous federal opinions dating back to the 1851 Treaty of Fort Laramie that confirms the tribes' ownership of the riverbed.

The February memo marked the fourth time the Interior Department had addressed the issue since January 2017, including reversals by both the Barack Obama and Donald Trump administrations. The Trump ruling favored the state over the tribes.