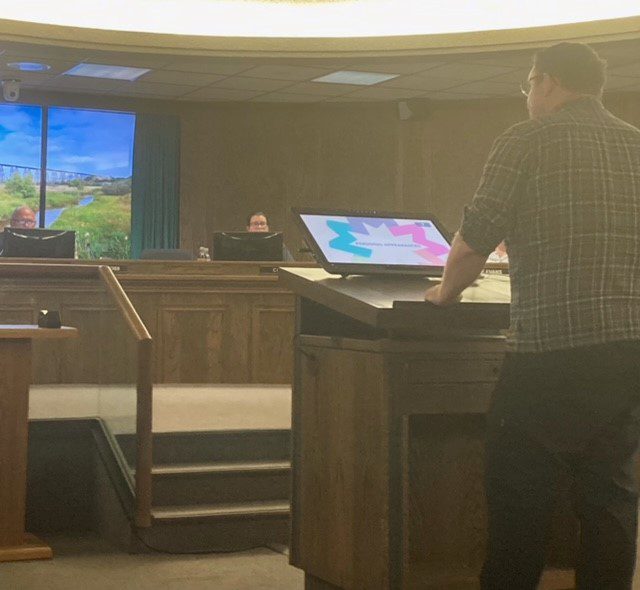 The final budget would be increased by around 15% from last year. The budget will still receive funds from increased property taxes but much of that is due to increases in property value assessments.

The amendments included authorizing 84 new police officer positions but fund only 81, with possible budget amendments if all 84 can be filled. Another amendment would use interest rate increases to fund enhancements to community organizations as opposed to using federal COVID relief dollars.

The third approved amendment would appropriate $232,000 of the economic development dollars in sales tax to the first phase of the wayfinding signage program, which both Alderwoman Lisa Olson and Alderman Stephan Podrygula opposed. The remaining $513,313 was unanimously approved for the downtown façade improvement program.

“I can’t support this either through direct comments that were said to me, sent to me, or social media comments,” said Olson. “There appears to be very little support for the wayfinding project. I can stand completely behind the façade improvement program, but I don’t think our residents want to see dollars put into wayfinding signage.”

“I think this is a good thing for the community,” Alderman Paul Pitner responded. “There’s negativity, and we’re never going to please everyone. There’s negativity on both sides of all issues. We have the same keyboard warriors making comments. I tend not to listen to those things because some people just hate progress.”

An attempt was made by Olson to levy the taxes to fund the three police officer positions, but only she supported it. According to City Finance Director David Lakefield, those three positions would cost $225,127 which he said is roughly equivalent to one mill and would be about four and a half dollars per $100,000 in property taxes.

“I think it’s money well spent,” said Olson. “I have a little heart burn on the budget amendments that we are going to have to consider in 2023. We deal with budget amendments on a regular basis but it’s typically because of some unknown issue that has come before, and we have to deal with it. Right now, I think it’s our due diligence to levy for these positions if we anticipate that we would approve them in 2023.”

Alderman Roscoe Streyle responded saying this is a good way to meet halfway as there are 10 open positions at the Minot Police Department.

“It’s saying ok, prove that you can fill them,” said Streyle. “There’s nobody up here that doesn’t want them filled. The fact of the matter is we can’t fill them. We’re authorizing something we know isn’t going to happen, so why fund them at this point. If they get filled, we can come with a budget amendment, and I don’t get why those are scary. To me that’s just being prudent. I won’t support anything that increases the mill levy a dime for the 2023 budget.”

Andrew Sudbrink, Minot resident, expressed his frustration at he council’s previous spending, which included the approval of the City Hall wall, moving City Hall to the old Wells Fargo building, and investing in EPIC Companies’ renovations.

“Six million dollars for 30 spots, that’s $200,000 per parking spot,” said Sudbrink about the City Hall wall. “Not one citizen would think that’s a good deal. Now we have to sit and debate whether you can afford to hire a policeman or firefighter. It's embarrassing. Maybe EPIC ought to pay their property taxes like everyone else in this town.”

Sudbrink said if the council oversaw a private business, they would run it into the ground.

“I think the wall outside is a good example of maintaining infrastructure,” Pitner responded. “The reason for the increase in prices is because we’ve deferred that project for years. And that’s what happens when you defer maintenance, whether it be in the city or in your house.”

“That wall is not just for parking spots. Without that wall, the collapse of that auditorium space into the lower space would happen,” said Alderwoman Carrie Evans. “When we had our original budget, we heard from citizens and taxpayers. This is a hard year for levies. I was very proud of this governing body. We took that and went into the budget and reduced it by $700,000, which was 3.09 mills from our original preliminary budget and a reduction of our 2022 budget. That equated to a property tax reduction of $7.24 in the $100,000 value. We hear the frustration. It’s always a balancing act. We do the best we can.”