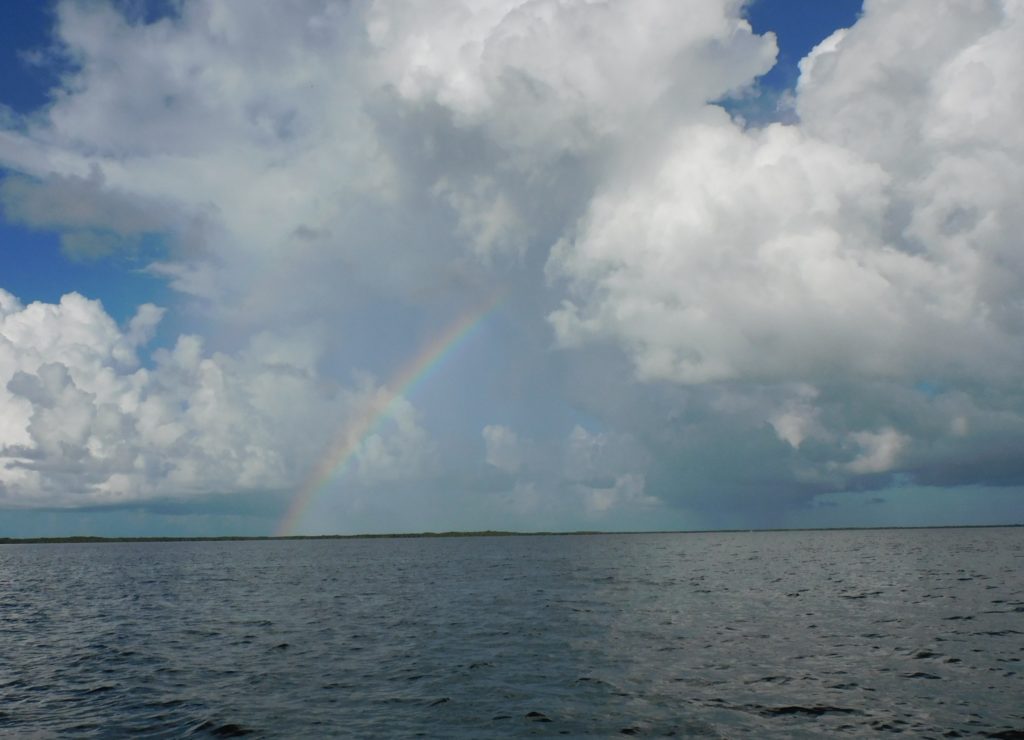 Much More Than Fishing

KEY LARGO, Fla. -- As the boat skied across the top of calm water toward a distant fishing spot, I had my head down, busy searching through the contents of my tackle box to find the perfect lure for our destination. My decision made after several minutes of consternation, I lifted a lure from the tray and reached for my fishing rod. It was then that I was vividly reminded of my surroundings.

In the western sky, arcing above blue water through towering white clouds, brilliantly illuminated in the morning sun, was a colorful rainbow. How silly, I thought, that I was immersed in my fishing tackle rather than absorbing my remarkable surroundings in the Florida Keys.

I enjoy fishing, to be sure, but I’ve always been ultra-conscious about the beauty of the world we live in – rainbows, sunsets, cloud formations, wildlife large and small, soft breezes, rustling leaves, the fresh smell of rain. All are constants that deliver meaningful memories.

I slipped my fishing rod back into its holder and placed my lure on the floor of the boat. My embarrassment was my own. There would be ample time for tackle selection. This was the time to observe, appreciate, imbibe, to be thankful for.

My fishing partner, and boat captain, was Mort Bank, Bismarck. It wasn’t long after we began tossing lures in the clear, shallow water that the buzz of the reel on the shark rod cut through a silent morning. The line was slicing through the water when Bank pulled the rod from its holder at the back of the boat. A nurse shark had taken the bait and was hooked.

We fish with artificial lures, but always have a fishing rod with bobber, hook, and bait trailing off the back of the boat. Combined with a chum stringer attached to the port side of the boat, the system attracts a variety of sharks – nurse, bull, black-tipped, lemon, spinner, broomhead and hammerhead being the most prevalent.

While fishing in an area we designated Shark Convention Bay for the number of sharks previously caught there, our targeted fish was barracuda and, on this morning, the cuda came to play. Bank boated several, including a few tackle busters.

I was slow to get into the act but found a lure and a rhythm to the cuda’s liking. Some provided a battle, others quickly shook the lure. Unique on this morning, or window of opportunity in fishermen’s jargon, was that the barracuda were striking lures multiple times during the same cast. Toothy cuda have a well-earned reputation as a one and done fish, meaning they seldom strike twice at a lure being brought back to the boat.

This was different, and we knew it. Several barracuda were caught and released, sandwiched around about 45 minutes needed to catch and release the previously mentioned nurse shark. Water depth? Two to 4 feet.

Aquatic life differs too. It is a different environment. Yes, there’s still sharks that roam endlessly, tarpon too, but also another fish that is a treat to see and catch – Jack Crevalle. Shunned by most anglers because of their bony structure and eating qualities, they are incredibly sporting. They hunt in schools that sometimes causes the water to boil. Fast, furious, and fun. That’s Jack Crevalle.

Bank caught two excellent Jack Crevalle, skillfully using a surface popper to induce powerful strikes. A short time later an acrobatic tarpon ripped through the water’s surface, tossing his lure aside in the process before disappearing beneath a gentle chop. Great surprise and great fun!

One of the most difficult things about fishing in the Florida Keys is that each day must come to an end. Thankfully, reliably, there always seems to be one more thing that happens on the way to the dock. One more thing to see.

On this day it was one of everyone’s favorite fish in the sea, a bottlenose dolphin. It was playfully swimming directly in front of our boat, at one point close enough to touch, as we traversed a narrow waterway through the ever-present mangroves. Time and again the big fish breached the surface to breath. It was easy to follow in water so shallow that the enjoyable mammal left a visible wake on top of the water.

All of the above happened in a single day.

Like I said, there’s always one more thing to see in the Keys. Discovering it makes each day all the more memorable.