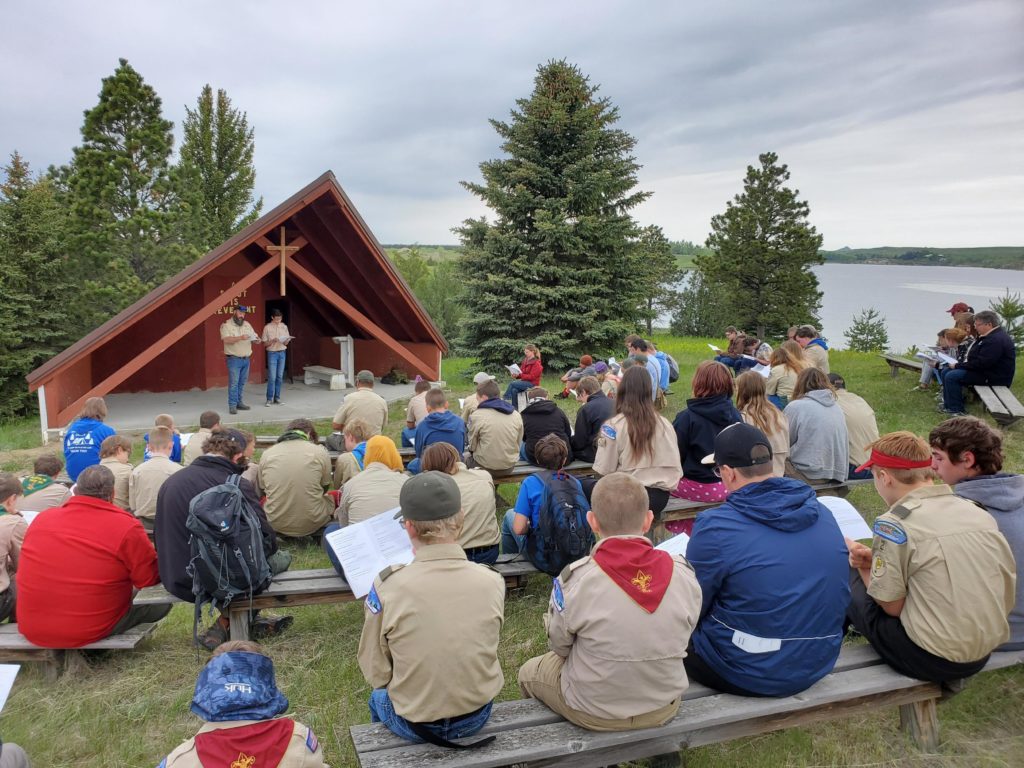 MINOT – Whether it's camping, building, entrepreneuring, or simply adventuring, Boy Scouts Northern Lights Council is all of that in one.

With 500 scouts and 21 programs in the Tomahawk district, most of them in Minot, District Director Carleton Borden said the programs are age and grade specific. Kindergarten through the first half of first grade are Cub Scouts. When scouts reach fifth grade, they can join Scouts BSA troops.

When the scouts turn 18, they are no longer youth, but there is a venturing program for ages 14 to 20.

Borden made it clear that the Girl Scouts is a completely separate federal charter than Boy Scouts. However, the Boy Scouts started allowing girls into certain programs in the 1950s. Borden said the only way to change the federal name would be if the U.S. Congress were to change it.

“The United States Congress back in 1912 passed a federal charter for us,” said Borden. “We are federally protected to be able to use the word scouts. We’re not trying to rebrand ourselves in that sense. You’ve been using the same name for 109 years, it gets a little hard to change it.”

A lot of reasons why families wanted Boy Scouts to allow girls was so they could send their children to one place instead of their boys to Boy Scouts and girls to Girl Scouts.

The membership fees pay for adult background checks and safety training, which every adult involved in Boy Scouts must take, according to Borden.

“Protecting our kids has been our number one mandate for over 100 years,” said Borden. “You always have to have two adults with the kids. We have internally tracked people who have been accused of inappropriate behavior towards kids since 1920. If you’re accused, you’re kicked out. Unfortunately you can’t weed them out 100%, but if you look at the amount of kids that said they were hurt has dropped. I know there were groups in North Dakota that were hurt, but most of the cases are 20, 30 years ago.”

Borden said the districts do not own the individual troops and units, but Boy Scouts recommend they do not have more than 100 scouts in each unit.

“We let the units evolve in their own way,” said Borden. “The scouts want to move up, they want to learn how to be leaders, and they love to have a title. I recommend having 25 to 30 scouts in each unit, because you end up having three patrols worth of kids, plus you have an older kids’ patrol. You can go to different places, a lot of parks and trails. There’s restrictions on how many people you can have on a trail.”

“A good year we consider 70% of the kids staying in the program,” said Borden. “Kids are aging out, moving out, and some lose interest. But a lot of new ones come in between August and October.”

Borden looks at why kids leave and tries to fix it. If a unit has higher than 80% retention, Borden will also find out why.

"Sometimes that means there’s a bubble, is that something we have to worry about?” Borden said. “Do we have a huge number of kids that stay together as friends?”

Borden said it's best if the units have roughly the same amount of kids in every age group.

“It’s natural for kids to drop out in high school,” said Borden. “We hope that they have learned good lessons and have positive memories throughout their life. We want to make sure they have the building blocks of life.”

Borden told of a study done by Tuft University that studied neighborhoods of kids from first through eighth grade. One was a strong scouting neighborhood, the other not at all.

Each unit is a self-contained program.

“We want them to do a lot of stuff on their own,” said Borden. “They decide when to meet. They could do an event, a campout. A lot of them like to go to the corn maze at Green Thumb.”

Borden recommends the units do a pinewood derby so they can come to the district races.


“We like kids to fail safely at the troop level,” said Borden. “At the Cub Scouts it’s always do your best.”

Borden remembers a time when he was in a troop and someone fell and broke his skull open, but the kids in the troop were able to patch it.

Other activities that the scouts have done include cardboard sled races, fishing derbies, and snow-shoe races. The scouts get frost points for camping in below 32-degree weather, and below zero degrees they get a Zero Hero award. Of course, only if it’s not dangerous.

Many of these adventures the scouts will take can be expensive for the individual kid, but by raising their own dollars, their parents may not have to pay for as much of it.

“We sell popcorn,” said Borden. “It’s not nearly the amount of sales as the Girl Scout cookies, but the units that sell popcorn, if they do it right, they don’t have to ask parents for another dime the rest of the year. A good unit will be self-sustaining the whole year. The families that most need scouting can’t afford us.”

The units cannot ask for donations, but they can do approved fundraisers. They can accept donations, according to Borden, because the Boy Scouts do not own the units, so the units are not 501c3s.

Though the units are self-contained, the national Boy Scouts have banned certain symbols like the confederate flag and pirates.

“If we use anything Native American we have to make sure the local Native American tribes approve of it,” said Borden. “If we’re encroaching on their intellectual property, their cultural stuff, we want to make sure we’re doing it correctly. We don’t want to offend, and if they say no, we don’t do it.”

Borden expressed why he enjoys what he does at the Boy Scouts.

“When I meet a family of first, second graders, and I can see them years later as Eagle Scouts, and seeing the transformation from unmade clay to leaders of tomorrow, I know what I’m doing is right,” said Borden.

More information on the Northern Lights Council can be found on its website.

Raising Children in Midst of Adversity