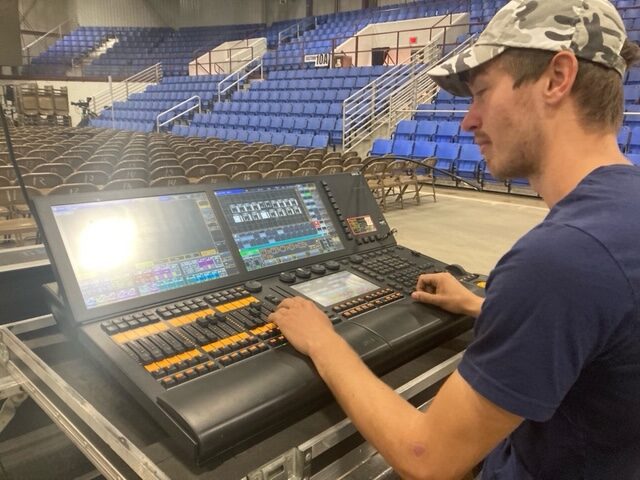 MINOT – Concerts at the Norsk Hosfest can be fun, but they probably wouldn’t be as much without lighting.

Adam Zastrow, who works for Theatrical Media Services out of Omaha, Nebraska, said his company is doing all the lighting in the All Seasons Arena where the Hosfest concerts are held, having worked for about six hours just on Monday.

“We were doing all of the lighting set up, so it’s from backing our semi-truck into the dock in the back, to getting everything off of the truck, to get it floating up in the air,” said Zastrow.

The computer that Zastrow operates has several buttons that he says can almost talk to each other.

“When I move the different faders and buttons, the different lights turn on,” said Zastrow. “Everything is all talking to each other through the computer system. This console knows what lights are up there and is able to talk to them and tell them what to do. I’ve gone through and set it all up.”

With about 15 people working on the lighting itself, Zastrow said they are booked almost all year.

“I’ve been traveling since April and have been home for about two weeks,” said Zastrow. “We do lots of county fairs, state fairs, festivals all over the country.”

In the last six months, Zastrow has been from New York to Las Angeles, with some of his co-workers going out of the country.

Zastrow has been doing lighting for about a year and a half.

“I went to college for theatrical lighting and computer science,” said Zastrow. “I sort of found my company through a connection at college, so now I’m working for them, so instead of doing theater lighting, I’m doing concerts and festivals and other events.”