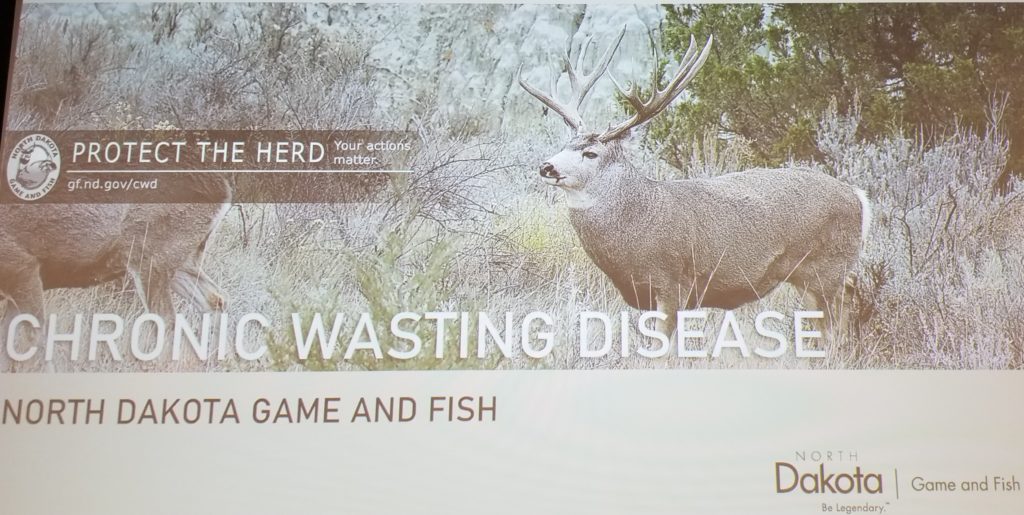 MINOT – It's a hot button topic with the state’s deer hunters, no doubt about that. Knowing that to be the case, the North Dakota Game and Fish Department recently conducted meetings in Fargo, Dickinson, and Minot to discuss chronic wasting disease.

Minot’s meeting was held August 29 with a turnout of about 50 citizen-sportsmen concerned about CWD, a disease that has shown up in increasing numbers in the state’s deer herd, leading to the ban of baiting and transportation of carcasses in several of the state’s deer hunting units.

Game and Fish has developed an intradepartmental CWD Task Force to study the issue, resulting in a plan for managing the disease in the state. In short, Game and Fish is efforting to get in front of a possibly serious CWD outbreak.

“We have yet to feel the impacts of this disease on our big game populations, but experience from other states and provinces suggest there can be consequences if the disease in left unchecked,” wrote Jeb Williams, Game and Fish director, in the2023-2027 CWD Management and Surveillance Plan comprised by his department.

The Game and Fish plan calls CWD an emerging threat to big game management. G&F says the disease is caused by an abnormal prion protein and causes irreversible damage to the nervous system, resulting in deer deaths.

While Game and Fish endeavors to “protect, conserve, and enhance wildlife populations for current and future use”, some hunters and landowners are in disagreement with G&F recommendations. Dusty Backer, Center, a landowner and hunter, says he has studied numerous data on CWD and finds himself opposing the approach put forth by Game and Fish.

“What’s bothering me is transparency, the misinforming people of the true facts,” said Backer. “In 20 years they’ve tested 40,000 deer and found only 70 CWD positive. That’s a .17% CWD rate.”

Backer advises people interested in the issue to find additional information at americancervidalliance.org.

Game and Fish counters that they know the prevalence of CWD is relatively low but calls upon “several decades of trial-and-error management” from across North America to guide their decision making regarding CWD.

Charlie Bahnson, G&F veterinarian, told the Minot gathering that, “On the bright side, North Dakota is not at a high infection point yet. There’s an opportunity to intervene now. We still have a chance to manage the risk, reduce transmission.”

One of the primary tools used by Game and Fish to combat the spread of CWD has raised the ire of many deer hunters. Game and Fish has made the decision to eliminate baiting, a preferred method of hunting for many, in deer hunting units within 25 miles of a positive CWD test.

“I’m for baiting. Don’t take the right away from me,” said Backer. “I’m no outfitter or anything. I just put feed down for deer on our own property.”

Some hunters make the argument that baiting deer allows for more ethical hunting with increased chances of making a good shot rather than wounding an animal. Game and Fish says baiting congregates deer and increases the chances of nose-to-nose contact which is known to spread CWD.

Of course, deer congregate elsewhere too, especially during the winter. Still, says Game and Fish, baiting is something that is part of the problem that can be controlled and they have an obligation to do that.

“It would be irresponsible not to do something with the information we have,” concluded Casey Anderson, Wildlife Division chief.