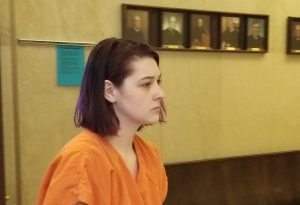 MINOT -- “The murder of one parent by another is the ultimate act of child abuse,” Judge Gary Lee told an accused killer and her attorney during a pretrial conference in a North-Central District courtroom Wednesday.

The accused was Heather Hoffman, 24, Minot. Moments earlier Lee set aside the week of April 24, 2023, for Hoffman to be tried before a jury of 12. She is charged with a AA felony, Murder-Intentional or knowing-Adult Victim, punishable by up to life in prison without parole.

The case against Hoffman stems from an April 22, 2022, incident in which Minot Police were called to a city residence about 12:40 a.m. They discovered a man lying in a pool of blood in a doorway of an apartment. Police say the deceased, later identified as Alexander Eckert, Minot, was in a child custody dispute with Hoffman, his ex-girlfriend.

During an autopsy, a bullet was retrieved from inside Eckert’s head. A shell casing found at the crime scene reportedly matched the caliber of bullet found during the autopsy. Additionally, say police, Hoffman was driven to and from the crime scene by a person who walked with Hoffman to Eckert’s apartment, heard discussion between Hoffman and Eckert, followed by a “pop.”

In Wednesday’s court appearance, Steven Mottinger, Hoffman’s court appointed attorney, informed Lee that, “The matter has not been settled. The state made an offer that is not acceptable.”

Lee then set the 2023 trial date, which allows for ample time for the defense and state to consider other settlements in the case.

Before the proceedings closed, Mottinger told Lee there was “another matter.” Mottinger was seeking to have the court allow Hoffman’s one-year-old daughter to visit her mother via video conference in the Ward County Jail. That request was firmly rebuked by the state.

After a lengthy pause, Lee reacted with the statement at the beginning of this story. He left open the possibility of revisiting the request in the future, saying, “I’m not saying I won’t allow it.”

Hoffman is being held in the Ward County Jail on a $500,000 bond and a “no contact” order with her child.

Tatanka Wind Farm Not Being Decommissioned