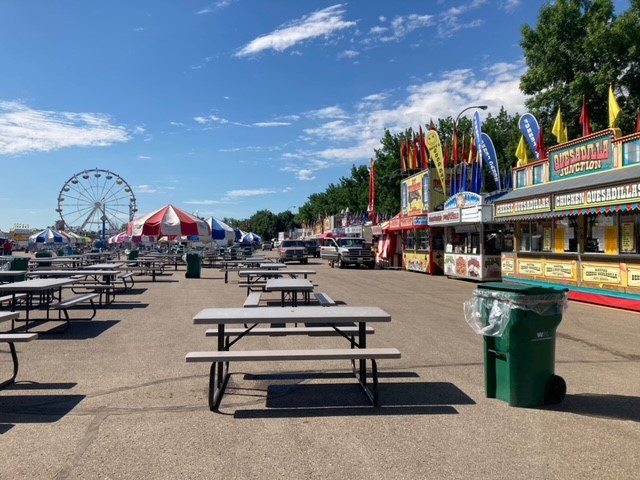 Though the tables and streets at the fairgrounds were empty Thursday, vendors at the North Dakota State Fair anticipate large crowds July 22-30. (Photo: Lydia Hoverson/The Dakotan)

Though the tables and streets at the fairgrounds were empty Thursday, vendors at the North Dakota State Fair anticipate large crowds July 22-30. (Photo: Lydia Hoverson/The Dakotan)

MINOT – Whether its food, rides, indoor or outdoor displays, all seemed ready Thursday, or at least almost so, for the North Dakota State Fair.

On the food side, Old Tyme Kettle Korn and Hansen’s Festival Concessions were almost ready to sell after many days of setting up.

“We have three tents that we put up today, we’ll bring all the supplies in and all the equipment and get ready for the fair,” said Guy Larson, Cando, said Thursday.

After four days of setting up, Hansen said she and their crew have been busy driving back and forth from Evansville, seven hours away.

Hansen said her husband, Paul Hansen, is planning to sell at an event in Detroit Lakes next week and, so far, their business will be understaffed there.

Payton Biermann from Kimberly Idaho and working for Hot Shot Thrill Rides out of Idaho, said it took him and the other employees about two days to set up the “Slingshot” ride.

This being Biermann’s first time setting up the ride, he described what the owner, Colby Barendregt, does with his rides on a regular basis.

“He goes around to a bunch of different fairs,” said Biermann. “They just got back from San Diego, California. We’re going to Minnesota after this.”

Magic City Harley Davidson is planning to set up its motorcycles to be showcased, and many of them to be sold.

“We’ll have some clothes, dealer t-shirts and some other products,” said Patrick Schmaltz, Minot, with Harley Davidson. “Providing information and opportunities.”

Harley Davidson is setting up a jump-start motorcycle simulation free for the public to enjoy.

“If you want to feel what it’s like to ride a motorcycle, come on out,” said Schmaltz. “You start it up and run through the gears, the rear wheels on some back drums.”

The fair is scheduled to begin Friday and end July 30.

Cackle in the Air