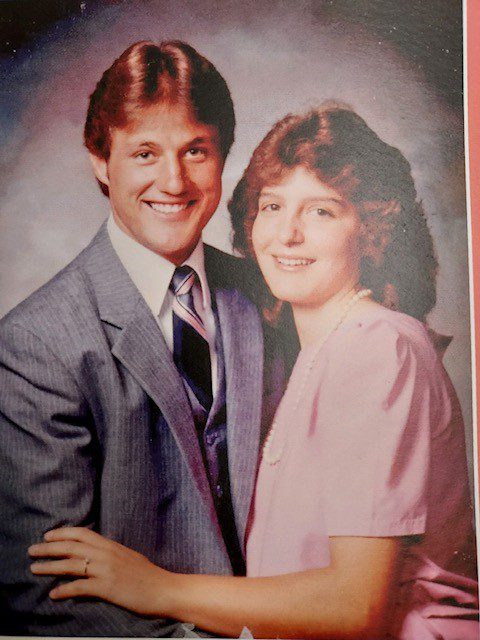 A photo for the wedding invitation in 1986 of Rep. Terry Jones, R-Dis. 4, and his wife, Kelly Jones. [Photo: submitted by Kelly Jones]

A photo for the wedding invitation in 1986 of Rep. Terry Jones, R-Dis. 4, and his wife, Kelly Jones. [Photo: submitted by Kelly Jones]

NEW TOWN -- Rep. Terry Jones, R-Dis. 4, New Town, has been in the North Dakota legislature since 2017. His wife, Kelly Jones, described what she felt when he first decided to run.

“Terry has a tendency to stretch himself pretty thin,” said Jones, “And I was just worried that was just another stretching himself thinner, but it turned out okay.”

Jones also explained her confidence in her husband’s decision to serve.

“That’s where his talents lie,” said Jones. “He is happiest when he’s helping people, and this is a great way for him to help people, and so I fully support what he’s doing.”

Jones added that she recognizes the pressures that come with being a legislator and does her best to make things a bit easier for her husband any way she can.

“I really enjoy helping him, make meals, make sure he’s all put together in the morning,” said Jones.

Jones explained that her husband always has what is best for the people of his district in mind, often asking her for a response to his ideas.

“He talks a lot about what’s on his mind, and I get to be a sounding board for him to get his thoughts all straight,” said Jone. “Sometimes he says stuff that’s kind of funny, and the Democrats really kind of pull it out and say, ‘you know this guy’s really a weirdo.’ I don’t know what all the Democrats think of him but they make funny videos out of him for the quirky things he says. But what he says fits, and it works, and it gets the people’s attention. They can relate to him.”

What Challenges Face the Democratic Nonpartisan League in North Dakota?