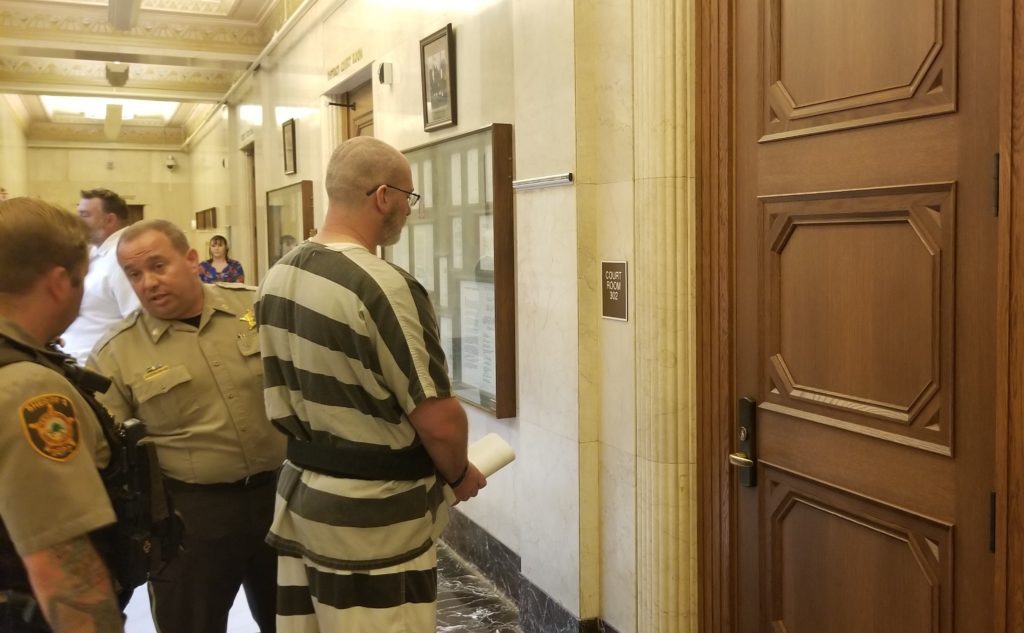 Eric Rod, Minot, waits to enter a Ward County courtroom where he will learn his sentence on a manslaughter charge. Judge Gary Lee handed down a sentence in the case Friday afternoon. (Photo: Kim Fundingsland/The Dakotan)

Eric Rod, Minot, waits to enter a Ward County courtroom where he will learn his sentence on a manslaughter charge. Judge Gary Lee handed down a sentence in the case Friday afternoon. (Photo: Kim Fundingsland/The Dakotan)

MINOT -- “Whatever I do is not going to make it better for anyone,” said Judge Gary Lee shortly before sentencing Eric Rod, Minot.

Rod appeared in a Ward County courtroom Friday in shackles, handcuffs, and wearing black and white striped prisoner clothing issued by the Ward County Jail. He had earlier entered a plea of guilty to a charge of manslaughter for causing the death of his wife, Connie Rod.

Connie Rod suffered a gunshot wound on May 21, 2020 while in her home. She died in a Minot hospital four days later. The shooting was initially thought to be accidental, but Eric Rod was later arrested and charged with murder.

However, saying they lacked sufficient evidence for a jury to find Rod guilty of murder, the state agreed to a lesser charge of manslaughter. Since the crime involved a firearm, the minimum sentence was four years. Lee accepted the state’s recommendation for 10 years, serve 5, and five years of probation.

Prior to sentencing there were some abrasive and emotional moments in the courtroom. Defense Attorney Patrick Waters voiced multiple objections, each overruled by Lee, while Samual Juvrud, Omaha, Nebraska, Connie Rod’s father, made a victim impact statement to the court.

“What you did is inexcusable, horrific,” said Juvrud. “It was my opinion you did this on purpose, which the court couldn’t prove, apparently. You will always be guilty of killing Connie.”

An affidavit filed with the court claims Erik Rod aimed a .22 caliber rifle at Connie Rod while inside their home, and pulled the trigger. Lee told the defendant that if he had followed well-known safety rules for firearms, the death of Connie Rod would have been avoided. From the time of the shooting, Erik Rod maintained the discharge of the firearm was accidental.

Erik Rod will serve his time in the North State State Penitentiary.

Another Arrest Made in Murder Case