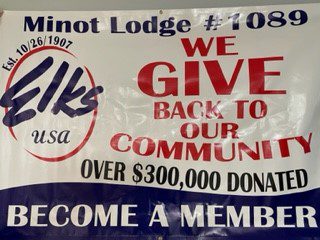 MINOT — Helping people in the community has been a part of the Minot Elks Lodge’s mission for more than a century – veterans, military families, children, and more.

Carolyn Bodell, secretary at Elks Lodge, said it has run in her family, as her husband, father, brother, and herself have all been members for several years.

While there is a national Elks Lodge, Bodell explained how Minot’s is unique.

“Other places it’s more active, they have actual buildings, restaurants, they might have golf courses,” said Bodell. “We don’t have a building. So, we meet and look at things we can do to either raise funds or who we can donate funds to. We’re more of a service group that donates to help people.”

“We raise money ourselves,” Bodell explained. “We do things to raise money. We have a trust that we can use money out of to help children and their families when they have medical expenses.”

The lodge also helps with after prom parties for several different high schools which may include monetary donations, serving food, and door prize donations.

“It’s whatever the different schools need,” said Bodell. “That is under the umbrella of drug awareness and drug and alcohol-free activities, to promote good health for the kids.”

“We’ve awarded that to kids from our surrounding areas, not just Minot,” said Bodell. “[That] can be for anyone, they don’t have to be an affiliate of Elks.”

Bodell explained that every decision is made by the dues paying members of the lodge, which is around 100, though not all are active. The active members meet the second Monday of every month at 7:00 p.m. in the Grand Hotel.

“We apply for grants at the national lodge,” Bodell explained. “And in the last few years we’ve been awarded $10,000 to $11,000 in grants. So, we’ve used those things to help, like, the YWCA, Project BEE, food pantries, Mouse River Players for children’s theater, North Dakota Firefighters for fire safety education for kids, Domestic Violence Crisis Center, 2nd Story, Men’s Winter Refuge.”

The lodge also puts on a fishing day for veterans.

“We pay for everything, and we take them out on Lake Sakakawea or Audubon,” said Bodell. “They get a meal and get to take a fish home.”

Bodell said the lodge puts together welcome packets for babies of Minot Air Force families, which includes a diaper bag full of baby necessities and a book.

“[Donations] have been pretty stable,” Bodell said. “I know in the last five years we’ve applied for and gotten more grants.”