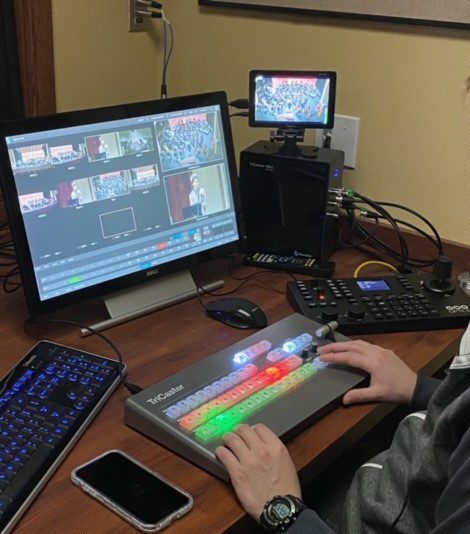 MINOT — The Minot Symphony Association recently received a grant of $15,000 from the Minot Area Community Foundation to upgrade the livestream technology in Ann Nicole Nelson Hall at Minot State University.

Minot Symphony Association Executive Director Ellen Fenner explained, “We used the funds to install two high definition cameras that are installed permanently in the hall, and it’s controlled by a remote controller, like a joystick, in the audio booth, so a single person can control multiple cameras.”

Fenner gave several different reasons as to why they put the money into upgrading their livestream. “With COVID, so many people are skeptical about coming back to a crowded area such as a performance hall, and we did our best to keep our patrons engaged during COVID. You know, music is so important on our mental health, and we wanted to let them know that we’re here for them and we want to support them, ‘cause they support us, and so being able to offer that livestream through COVID, allowed us to keep in touch with them and keep them interested even if they were not comfortable with coming to the hall. So for us to be able to keep this long term, we had to be able to make some changes.”

It also ended up working out well with the performers who are not from Minot. Fenner said, “We had people from Venezuela, Columbia, Italy, Spain, and so that’s pretty special for the families of our musicians and performers to be able to tune in and to see the performance. Don't get me wrong, it’s not going to replace what you can actually get from live music, but it helps to be able to keep connected with people beyond the Minot community.”

"Don't get me wrong, it’s not going to replace what you can actually get from live music, but it helps to be able to keep connected with people beyond the Minot community.”  Ellen Fenner, Minot Symphony Association executive director

The new technology will also help students at Minot State University who are going into those types of fields, according to Fenner. “If they apply for a position somewhere, they can say ‘yes, I’ve used livestream equipment, using multiple cameras.’”

Another benefit of the new livestream system is it allows anyone who cannot attend in person to watch. “Some elderly people don’t like to go out at night, and a lot of our performances go ‘til ten o’clock, and that’s too late for them. But if they tune in at home, they can watch it without having to be transported in the dark, and so that really helps,” said Fenner.

According to Fenner, the upgrade is simply phase one of a two phase process. She said the first phase is for those at home. “Our next phase is for the visual stimulation for those in the hall, and that is all that I will say at this time.”

More information on the Minot Symphony Orchestra can be found on its website or by calling 701-858-4228.