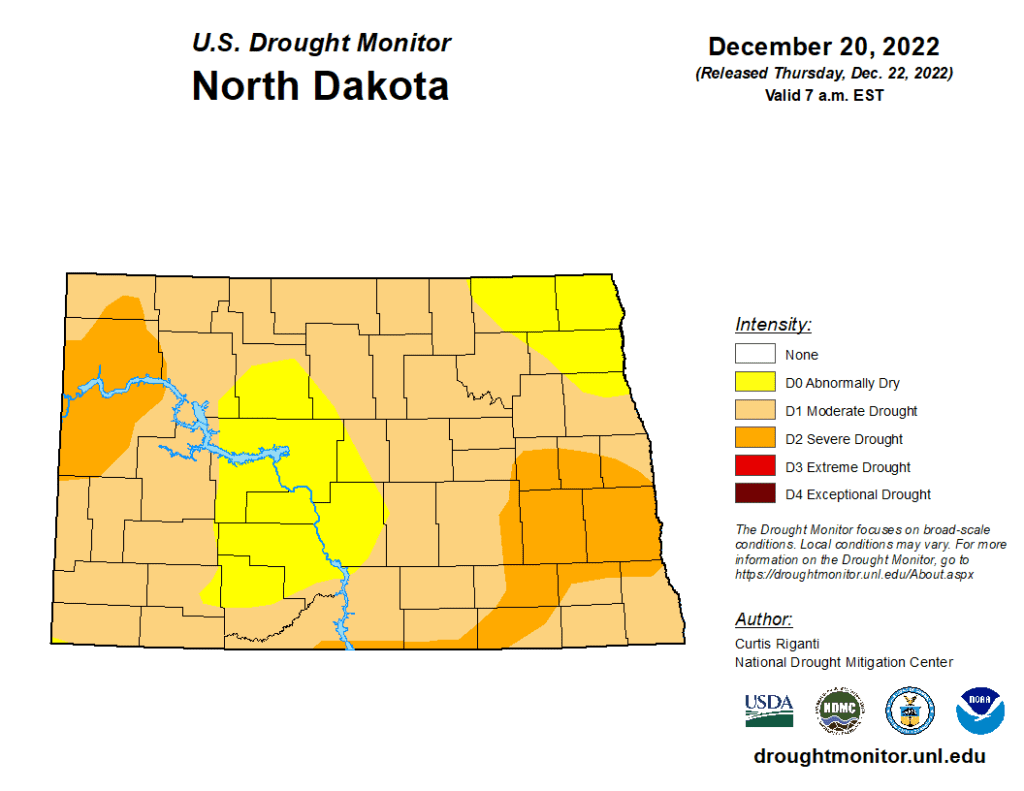 MINOT – You curse it, shovel it, get stuck in it, but there is some good in that snow on the ground – believe it or not.

“For the time being, I’ll take all the snow we can get.” said Allen Schlag, National Weather Service hydrologist in Bismarck. “The bottom line is, beneath that snowpack is a very warm and very dry soil.”

Schlag’s assessment is reflected in the latest issuance of the Drought Monitor for North Dakota. Drought conditions have improved considerably from a few weeks ago, primarily due to the amount of snow on the ground.

According to the U.S. Drought Monitor, “Widespread moderate to heavy rain and snow fell over parts of the High Plains region, especially the Dakotas and northern Nebraska. Due to the growing snowpack and lessened precipitation deficits, improvements were made across much of South Dakota and North Dakota.”

Surprisingly, despite the sub-zero temperatures and wicked wind chills of the past several days, the snowpack has provided significant insulation that has kept soil temperatures warmer than usual for this time of year.

“There’s a fair number of locations in the state where the surface of the soil is still not below freezing,” stated Schlag. “Isn’t that hard to believe for as cold as we’ve been? This snow has had one heck of an insulating effect on the ground.”

Soil temperatures in the Minot area are about 18 degrees with a frost depth of 31 inches. In contrast Bismarck, which has more snow on the ground than Minot, the frost depth is 26 inches.

The NWS calculates the amount of water contained in the snowpack, information used to help formulate runoff forecasts next spring. Currently, said Schlag, the snow water equivalent across the state is running above average.

“We’re sitting on 2-plus inches of water equivalent in the snowpack. That’s usually what we have for an average going into the spring melt,” said Schlag.

It’s much too early in the winter season to arrive at any conclusions regarding the spring melt but, given the current soil conditions, the ground is well situated to absorb a significant amount of melt water.

The NWS issued a Flood Potential Outlook for the Souris River Basin Thursday. Among the highlights was, “Most of western and central North Dakota received significant snowfall in early November and again around the middle of December. However, the higher amounts of snow tended to be in the very southern extent of the Souris River Basin and overall snowpack lessens the farther one looks up into Saskatchewan.”

Saying it is early in the snow accumulation season, the outlook noted that “snowpack across the basin in not enough to create undue risk of widespread flooding.”

In addition, the outlook noted that “Lake Darling above Minot along with the Canadian reservoirs behind Grant Devine and Rafferty Dams are near normal to somewhat below normal for water levels this time of year.”

The NWS will issue another assessment of snowmelt conditions in late January.

A Moving Christmas Concert for All Ages