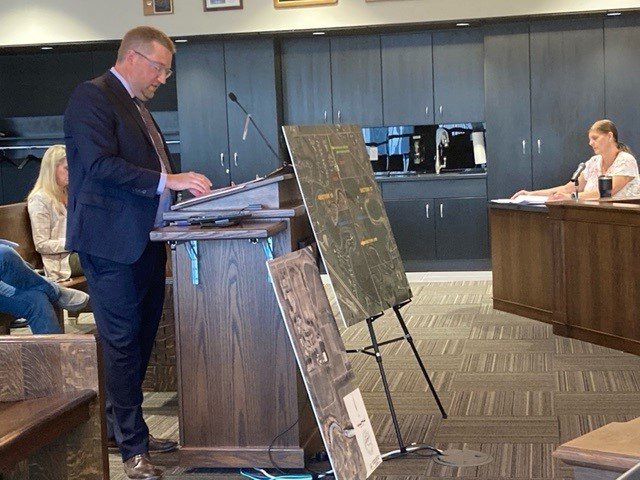 MINOT – Section lines can be complicated to deal with but is a situation the Ward County Commissioners sifted through at their meeting Wednesday.

Dakota Boys and Girls Ranch Foundation requested the vacating of a portion of a section line within its property west of Minot in Harrison Township. This portion runs from 19th Avenue Northwest to just past the ranch’s most southward building, running right next to it. The ranch made the same request in May of 2021.

Steve Lautt, an attorney representing the ranch, said it’s requesting the vacation due to plans of building a residential cottage facility and eventually a school. The line also separates the extra territorial jurisdiction of Minot and Burlington, according to Luatt, which adds more people affected by the situation.

According to Lautt, the main objector to the vacation last year was Russel Rogne, on behalf of Dakota R, LLC which owns property right next to the ranch, outlined in blue in the image above.

“Basically, his main objection to the vacation is it would cut off his access to his property in Section 18,” said Lautt.

Lautt quoted commissioners from last year stating their concern over restricting Rogne’s access, which caused them to deny the petition.

“It’s a correct concern that you don’t want to restrict access to a person’s property,” Lautt confirmed. “At the close of the 2021 hearing, the commission encouraged the ranch to visit further with Mr. Rogne to see if a mutually agreeable solution could be reached and then come back with a renewed petition.”

Lautt said he met with Rogne twice to discuss maps, past usage of that portion of the section line, and legality of the situation, and though it helped them to understand each other’s perspective They still could not agree, with Lautt saying the section line could not provide access to Rogne’s property because of a dead loop from the Souris River that has obstructed traffic since the late 1980s.

Lautt quotes Section 24-07-03 of the North Dakota Century Code, where it speaks to three conditions required for the closing of a section line, all of which Lautt believes are met in this case. Those conditions are that the section lines are not used for ten years, have not been traveled due to natural obstacles, and are not required due to readily accessible alternate routes.

“Any one of those is sufficient to vacating the section line,” said Lautt. “In this case, all three circumstances are present.”

According to Lautt, Rogne had objected last year due to the possibility of selling a portion of his land that would have no access, but Lautt believes the part of the section line in question would not provide access to any portion of his property anyway.

Rogne said Wednesday that he still disagrees with Lautt, saying that none of the three conditions were met. He also said there is no way to access his property from the south due to the river.

“I’ve driven on that section line, I drove on it two days ago,” said Rogne.

Rogne cited Section 24-07-01 of the North Dakota Century Code, which says roads that have been in use for 20 successive years are declared public roads.

“That road has been there actually for 60 years,” said Rogne. “Part of it is on the section line, and it veers off and goes across the drainage. That is the road that allows me access, and I’d like to maintain that. I’m not trying to stop progress on the ranch, I have no disagreements with it. They’re good neighbors.”

Rogne said without that route he would have to cover three sides of his property to get to his property in Section 18.

“I’m willing to go straight out on the east side of the property, but I’m not willing to angle over to the east side, up to the north, kitty corner over here,” said Rogne. “That’s what they want. There’s no access from the south. Sure, there’s an alternate route through my property, but the law doesn’t ask that I give up my private property to supersede a public road, and that’s what they’re asking me to do.”

Commissioner John Pietsch said the trail between the two dead loops looks like it could be used, and Rogne confirmed that though he doesn’t normally use it, he has in the past, with that and his driveway being the only way he accesses his property.

“There’s gravel on the road until you get to the far side of the drainage,” said Rogne. “It’s been there for 60 years, and no one’s complained.”

Lautt responded saying the only reason Rogne could access that road was because he used the ranch’s private driveway, and that the ranch never asked him to take a different route.

“The ranch permitted that because they’re good neighbors,” said Lautt. “They always have been.”

State’s Attorney Roza Larson said if the ranch wanted to deny access to Rogne it legally can, unless the road has been continually used by the public for over 20 years.

“You can’t cross at the section line, you have to deviate off to get across the dead loop,” said Larson. “If you own property on both sides of the section line and you apply to the county commission to close and it’s allowed by the statute, then you guys make that determination.”

The commissioners unanimously denied the request to vacate the section line, encouraging both parties to continue to discuss other options.

Gifts for a Good Cause