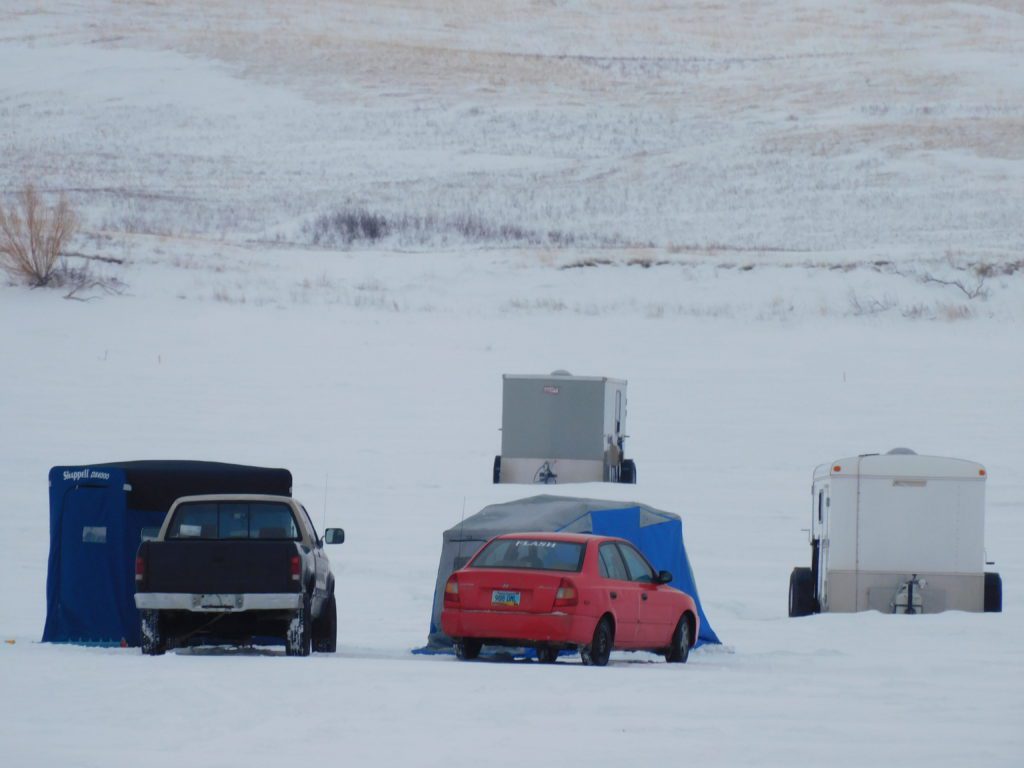 Ice fishermen enjoy a day on Lake Darling, an impoundment on the Souris River above Minot. Lake Darling is much lower than normal for this time of year and, based on the latest runoff outlook, is not likely to fill this summer. [Photo: Kim Fundingsland/The Dakotan]

Ice fishermen enjoy a day on Lake Darling, an impoundment on the Souris River above Minot. Lake Darling is much lower than normal for this time of year and, based on the latest runoff outlook, is not likely to fill this summer. [Photo: Kim Fundingsland/The Dakotan]

BISMARCK — It appears the Souris River will more than behave itself this spring, at least through the City of Minot. The latest Flood Projection Outlook issued by the National Weather Service places the chances of even moderate flooding at virtually all points on the Souris at less than 5%.

A more likely scenario for the runoff season is that there won’t be enough of a melt to recharge reservoirs on the Souris that have fallen well below preferred operating levels in the wake of last year’s drought. Although conditions can change in the coming weeks, the trend for the past several months is favored to continue. At Lake Darling, the last reservoir on the Souris River above Minot, water levels are already very low.

“We’re about 3 ½ feet below where we’d like to be. The current outlook isn’t good with minimal snowpack in the basin,” said Tom Pabian, Upper Souris National Wildlife Refuge manager. “If we don’t get runoff, it’ll be a long summer for Lake Darling.”

“If we don’t get runoff, it’ll be a long summer for Lake Darling.”Tom Pabian, Upper Souris National Wildlife Refuge manager

Allen Schlag, NWS hydrologist, said there is an inch or less of snow water equivalent in what little snowpack there is over the western Souris River basin, including above Grant Devine and Rafferty Reservoirs in Saskatchewan.

“I’m not convinced there’s enough water in the system to fill the reservoirs,” stated Schlag. “Looking upstream from Minot at the three major reservoirs on the Souris, there’s just not a very robust snowpack there.”

Pabian said runoff projections he has seen are minimal, and that he can “easily see 1,589 by late summer.”

Snowpack, and the water contained therein, has lessened over the past several days. In turn, that has reduced the amount of limited runoff that was projected for the Souris basin earlier this month.

“The risk of spring flooding, everywhere, has gone down the last two weeks."Allen Schlag, NWS hydrologist

“The risk of spring flooding, everywhere, has gone down the last two weeks,” said Schlag. “We’ve had some nice weather across the state and a lot of snow disappeared, melting and evaporation. We had the right conditions for it.”

Schlag explained that snow that remains, particularly in the western drainage of the Souris, is crusty and some of it “completely reduced to ice,” which takes a longer time to melt than normal snowpack. Additionally, much of the remaining snow cover is trapped in sheltered areas such as tree rows and coulees.

“All of that leads to generally lower runoff rate. It’s just hard to melt,” said Schlag.

With the risk of spring flooding due to melting snowpack very minimal, there’s still the matter of ice jams that can cause certain sections of rivers to rise very quickly.

“That’s my major concern right now,” said Schlag. “There’s a risk of a large rainstorm in our future as the weather warms. If it hits a river with a lot of ice on it, we can see ice wanting to move and break up. If we have a warmup without a big rain, there’s not a high risk of ice jams.”

The latest outlook notes that a greater than normal risk of flooding exists for the Wintering River near Karlsruhe, Willow Creek at Willow City, and Towner, Bantry, and Westhope on the Souris downstream from Minot.

The next Flood Potential Outlook for the Souris River will be issued March 10.