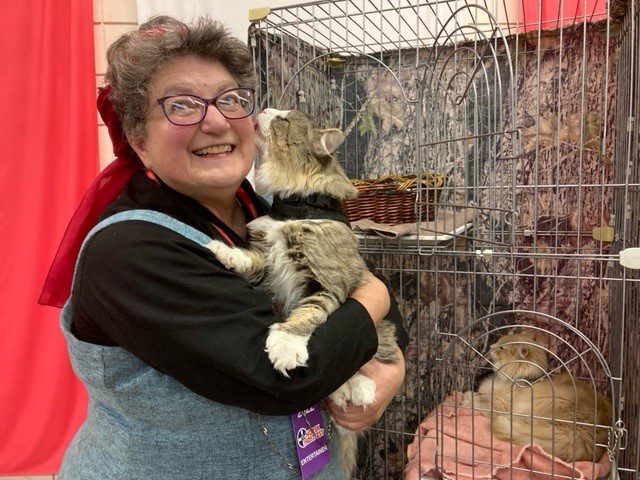 Betty Jean Kauffman, Minnesota, holds her Norwegian Forest cat Fyrste, which she is displaying in the Viking Village at the 2022 Norsk Hostfest. (Photo: Lydia Hoverson/The Dakotan)

Betty Jean Kauffman, Minnesota, holds her Norwegian Forest cat Fyrste, which she is displaying in the Viking Village at the 2022 Norsk Hostfest. (Photo: Lydia Hoverson/The Dakotan)

Norwegian Cats at the Hostfest

MINOT – A Viking’s mouse trap might come in the shape of a cat, as shown at the 2022 Norsk Hostfest.

Betty Jean Kauffman, originally from Sherwood, showed in the Viking Village at the Hostfest her Norwegian Forest cats which she has been breeding for four years.

“They rode with the Vikings on ships,” said Kauffman. “Their remains have been found in Viking graves. They were valued for their mousing, and they’re featured in the legends of the Norwegian people and given as bride gifts because of their mousing ability and because they’re so pleasant to their people.”

Kauffman currently has six adults and eight kittens. She plans to sell the kittens before Thanksgiving and has sold other kittens to people from several states around the country and Canada.

Two of Kauffman’s cats were at the Hostfest, Fyrste, which she said means prince, and Freyja, who she said was a legendary goddess in Viking mythology.

This being her second time at the Hostfest, Kauffman said it is her biggest event. Now living in Minnesota, she displays her cats at Norwegian festivals there.