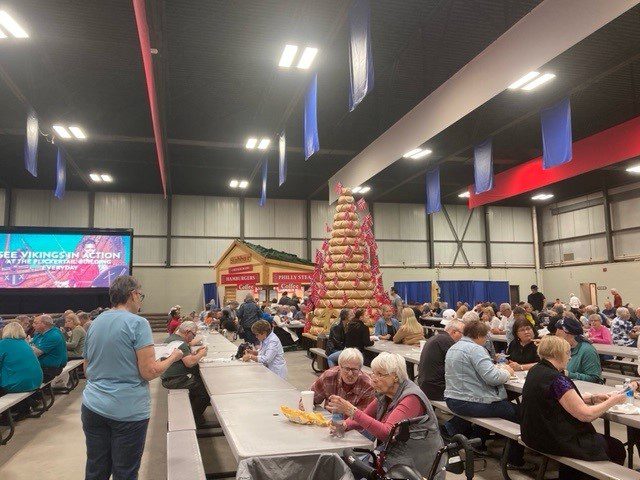 The Norsk Hostfest is back this year, with some changes that left many people confused and upset. (Photo: Lydia Hoverson/The Dakotan)

The Norsk Hostfest is back this year, with some changes that left many people confused and upset. (Photo: Lydia Hoverson/The Dakotan)

MINOT – With many people confused and even upset over changes to the Norsk Hostfest after its two-year hiatus, the brand-new management this year addressed some of the concerns.

EPIC Events, the company doing most of the operations for the Hosfest this year, changed a lot of the layout of the Hostfest at the fairgrounds. McKenzy Braaten, VP of communications for EPIC Events, said EPIC teamed up with the Hostfest’s board of directors.

“We’re very excited to have it back, but of course there’s changes,” said Braaten. “We tried to do our best to bring it back, whether it was the financial aspects and the changes in the economy, making sure that we can keep the culture and rich heritage, but also kind of bring a little bit of a twist to it, trying to attract a little bit of a younger audience as well as keeping the former older audience that has been coming for a long time.”

Braaten said some of the nightly acts and having more beer sales, as well as Oslo After Dark, an event after 10 p.m. in Oslo Hall, were some of the changes EPIC made to attract a younger crowd.

“We really want to keep the heritage there and make sure the tradition’s there, but also, with everything there’s change and of course there’s just been change in the last few years,” Braaten explained. “With COVID obviously we lost some of the vendors from overseas that don’t travel as much anymore, but we still have some great people that did decide to come back.”

Many local vendors didn’t come back due to the two-year break because they were booked for other events, says Braaten, and having two main acts cancel on them also added some setbacks.

“I think we’ve done a good job in filling those acts and making sure that we still bring in good talent,” said Braaten. “We honored people’s refunds and were able to give those back, but when they’re canceling a whole tour, it does take a lot of time for those people to get their refunds.”

Braaten hopes the Hostfest will come back full circle.

“Obviously when you have something canceled for two years, it takes some time to bring it back,” said Braaten.

Smaller changes, such as no longer having stamps and requiring people to be scanned out to come back into the event, Braaten said, was due to new systems like Ticketmaster that EPIC is trying.

“We tried to eliminate some things that we saw maybe not work as well in the past,” said Braaten. “We used different ticketing systems too. It’s just a little bit of a different process, but obviously so many things have moved more to that technology type of thing.”

Braaten said she thanks those who have decided to come back.

“We hope people are really enjoying it,” said Braaten. “There are some changes and I’m sure people are noticing those, but we hope to just keep wrapping this up and make sure that next year and the years after people want to still come and enjoy it.”