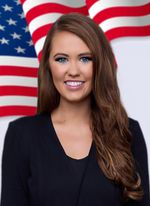 BISMARCK (AP) — Former Miss America Cara Mund has qualified to appear on the November ballot as an independent candidate for North Dakota's sole U.S. House seat, the secretary of state's office announced Friday.
Mund is challenging Republican Rep. Kelly Armstrong, who is seeking a third term. The secretary of state's office said Mund had met the 1,000-signature threshold for listing on the ballot. Mund entered the race in August and said her support for abortion rights motivated her candidacy. Democrat Mark Haugen announced Sunday that he was quitting the race, citing pressure from some in his own party to make way for Mund.
The secretary of state's office also announced that state Rep. Rick Becker met the signature requirement to be listed on the ballot as an independent challenging U.S. Sen. John Hoeven. Becker, a Bismarck plastic surgeon, narrowly lost the Republican endorsement in April.
Katrina Christiansen, a political newcomer and University of Jamestown engineering professor, is the Democrat in the race.