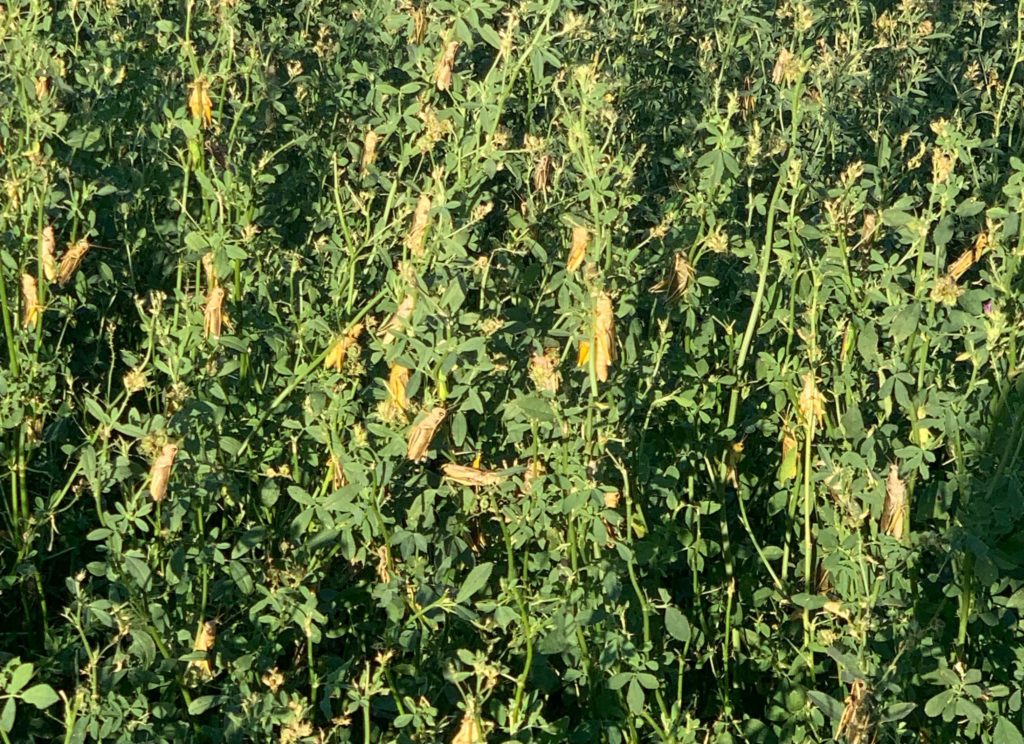 MINOT – Grasshoppers can be a fun catch for little kids, but when they get into the fields, they can be quite a nuisance for farmers.

TJ Prochaska, extension crop protection specialist from the North Central Research Center, said the grasshopper population has exploded in the last two years, leading to some significant defoliation for crops, especially in the earlier part of the growing season.

“As we move to the later part of the growing season, like right now, adult grasshoppers are not really defoliating leaves, but they are clipping or cutting the tops of the heads off of our small grains in the area,” said Prochaska. “So two different types of damage, but all year long.”

Prochaska explained defoliation does not completely destroy the crop, but because of the munching of the leaves the crop is not getting the full benefits of photosynthesis. He also said in many parts of the state this problem is not as bad as last year, and in some parts it has gotten worse.

“Areas that got it a little better were areas that probably saw a little more moisture and had some disease incidents that moved through the grasshopper population,” said Prochaska.

Places that have been hit harder include Grenora down to Watford City as well as the Ryder and Makoti area of Ward County.

“These were areas that had severe damage reported as populations were just through the roof,” said Prochaska. “Part of that is they missed on some of those spots of precipitation. It’s hard to put in a block because the rain was so hit and miss and spotty this year.”


Grasshopper populations are still high across the state, according to Prochaska, but those places, such as Ryder, Makoti, Watford City, and Grenora areas were hit much harder. Prochaska said some farmers in those areas were spraying three to four more times more than usual for grasshopper control. As far as he is aware, this is a problem mostly for North Dakota and eastern Montana.

“I think some people are going to see some yield loss from it this year,” said Prochaska. “The damage is done now. The goal of a lot of growers is going to be taking notes of where they had the high populations this year, and kind of keep a field history.”

Prochaska says farmers may want to also keep note of grasshoppers moving from early maturing crops, such as wheat, small grains, and canola, to late maturing crops such as corn, soybeans, and sunflowers.

“Growers can go out and try spraying, but the populations are so high, I think populations from neighboring fields are just going to fill in and they’ll be right back at square one in a few weeks,” said Prochaska.

One solution to the problem that is outside of farmers’ control, according to Prochaska, would be a 10-day to two-week bitter cold spell before it snows.

“That will actually expose some of those ever-wintering eggs for crop grasshoppers,” said Prochaska. “If we get snow cover, that actually serves as a thermal-blanket, and that protects those populations for next year.”

If the winter is beneficial to grasshoppers, Prochaska says some people may want to spray grass edges along the fields come springtime.