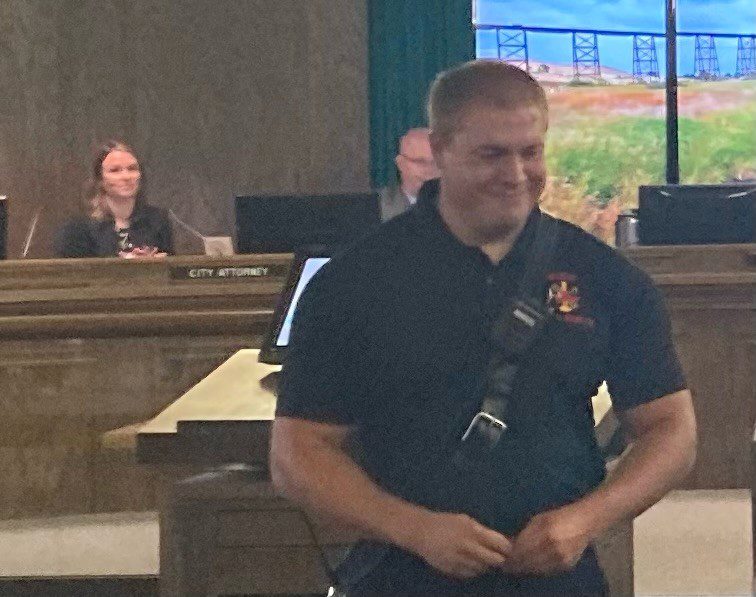 Scott Allen, Minot firefighter, is honored at the Minot city council meeting Monday for his heroic efforts in California back in July. (Photo: Lydia Hoverson/The Dakotan)

Scott Allen, Minot firefighter, is honored at the Minot city council meeting Monday for his heroic efforts in California back in July. (Photo: Lydia Hoverson/The Dakotan)

MINOT – Not all heroes wear capes, and no hero truly takes a vacation.

Such was the case for Scott Allen, fireman from the Minot Fire Department, who, according to the City of Minot, took a vacation in California early July with nine others from his family.

As he and his family were floating in a raft down the American River in Citrus Heights, his brother-in-law’s wife, Hanh Nguyen, who jumped in the river for a swim, started to float away. She quickly realized she was in trouble as the current took her away from the group.

Mayor Tom Ross read to the council from a letter writing by Nguyen to the Minot Fire Department.

“I started panicking and I felt my muscles giving up, and I couldn’t swim anymore,” read Ross. “Scott saw the danger I was in, and immediately jumped in the water.”

Nguyen wrote that there were others in the river who did not notice she was in trouble, and that the current was too strong for Allen to help her back to the raft.

“Scott pulled both of them to a small rock, where they hung on until the group brought the raft and pulled them back on board,” Ross read.

Allen was honored at the council meeting where he and his fellow Engine 1 firefighters led the pledge of allegiance.

“We’re never surprised when our first responders rush to aid and need, but we’re always amazed,” said Ross. “Thank you for reminding us that a first responder is never truly off duty.”

Some in GOP reject Becker claim of gains for far right