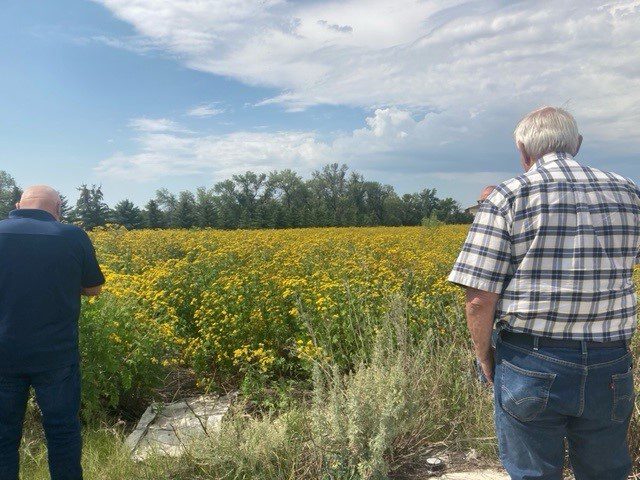 Ward County commissioners Howard Anderson, left, and John Fjeldahl look at a blighted property south of Erik Ramstad Middle school that is within Minot city limits but not part of the city. (Photo: Lydia Hoverson/The Dakotan)

Ward County commissioners Howard Anderson, left, and John Fjeldahl look at a blighted property south of Erik Ramstad Middle school that is within Minot city limits but not part of the city. (Photo: Lydia Hoverson/The Dakotan)

MINOT – What should the county do about a property within city limits that isn’t part of the city?

Johnson lives next door to a property of a few acres just south of Erik Ramstad Middle School, full of weeds and garbage, some as tall as an average human. This property is within city limits but has not been annexed by the city.

“The city has never incorporated it,” said Chairman Jim Rostad of the Ward County Commission. “The biggest deal is the weeds.”

According to Dana Larsen, Ward County highway engineer, the City of Minot can make its own ordinances forcing landowners to make their properties look decent. However, Larsen says, the county can only step in if the property is a health hazard or the weeds are noxious.


“The county doesn’t have an ordinance that says you’ve got to mow your grass, otherwise every wheat field out there would need to be mowed,” Larsen said.

Larsen said the land is in the city zone but is not part of the corporate city.

“Travis claims that you can’t see them because the weeds are so tall, but he says there’s boulders in there the size of pickups and cars,” said Rostad.

Rostad said Doug Diedrichsen, Ward County planning and zoning administrator, googled the land on a map and confirmed the boulders.


“The only time we were able to see it was a few years back during the drought,” said Johnson. “I can’t get anyone to do anything about it.”

Johnson said the city made him build a sidewalk by his house that ends where the blighted property begins.

“I told them they’d have to annex this property first, and they just didn’t care,” said Johnson. “So now I built this sidewalk that goes nowhere.”


Johnson also said the city had the garages west of the property torn down for the sidewalk, but the sidewalk was never built.

“The city has lots of places like this,” said Larsen. “That would be a good thing to talk about at your liaison committee about these holes. We tried talking about this 10 to 15 years ago, trying to come up with a plan.”

Johnson said these weeds are bothering his neighbors as well.

“You probably got enough to make a small brick oven with all the concrete forms in there,” said Johnson. “It’s crazy. There’s stuff everywhere in there. It’s going to be such a mess if it ever gets mowed.”

Johnson said he has been complaining about this problem for many years.

“You can’t complain to the right people because nobody knows what’s going on,” said Johnson. “You shouldn’t have a place in town where you can legally set up fireworks in town. This is a mess and I don’t want it anymore.”

Minot City Manager Harold Stewart said the city has jurisdiction over zoning matters within a two-mile radius outside of the city.

Stewart said there are a couple processes for annexation, though it typically starts at the property owner's request.