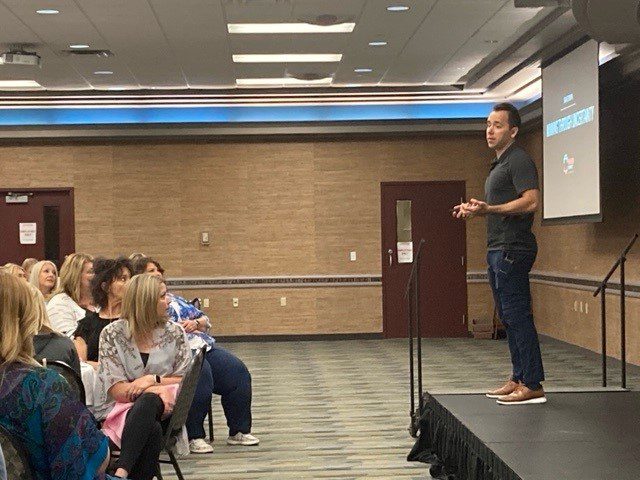 MINOT – Prison is a dark and uncertain place to be for those who don’t deserve it, according to former political prisoner Sam Goodwin, who spoke in Minot Wednesday.

Minot Women Connect hosted Goodwin at the Grand Hotel, where he spoke to a large crowd about his experience of being held captive in Syria in 2019.

In 2012, when Goodwin graduated Niagara University, he took his first professional job in Singapore where he ended up staying for six years to help launch a startup tech business. Wanting to travel as much as he could, he made it his goal to travel to all 193 countries of the world. By spring of 2019, he had traveled to 180 countries in the world and his next one was Syria.

On May 25 of 2019 a pickup truck pulled up to him as he was walking along, and two armed men captured him and forced him into an airplane. The plane flew him to a prison in Damascus.

“These men were loyal to the Syrian president,” Goodwin explained. “They’d learned of my entry into the country and immediately raised all kinds of skepticism about my travels. They accused me of espionage and being an American spy and collaborating with terrorists.”

Goodwin said the cell was fairly large but had no windows and was completely concrete. He had nothing but a blanket and had to knock for meals, which he said was often boiled potatoes, bread, and water. He remained in solitary confinement for 27 days.

“Throughout this time I was never physically harmed, but every day I would hear the sounds of neighboring inmates being beaten, whipped, and tortured,” said Goodwin. “Of course I couldn’t help but wonder when was my turn.”

Goodwin said he leaned on skills he had learned from being an athlete, as well as trying to be grateful for what he had.

“My faith was my biggest source of strength throughout this entire journey,” said Goodwin. “I grew up in a strong Catholic family. I’m very grateful to my parents who instilled that in me at a very young age. Everything had been taken; my material possessions, my freedom. But I knew that my faith was absolute.”

After 27 days he was transported to a federal prison on the outskirts of Damascus called Adraa, where he was put in a cell with 40 other Syrian men for 35 days. He was also put on trial four times where he said all four times he was denied a lawyer and translator.

“The other inmates became friends,” said Goodwin. “We cooked and shared food together. I taught them some English, they taught me Arabic. There was a prison basketball court. I taught several of them how to play knock out. One of them even smuggled a note out of prison. A note that successfully navigated this game of geo-political navigating and made it to my father in Saint Louis. It served as the first time I managed to communicate that I was alive. These men who risked their lives to save mine were a remarkable display of humanity.”


Goodwin realized most of the prisoners were not criminals, but victims of a corrupt system.

On July 26, Goodwin was released into Lebanon, where he met and thanked the head of Lebanese internal security General Abbas Ibrahim whose negotiations helped free Goodwin.

“My parents were there, culminating this moment that was indescribably emotional,” said Goodwin.  “A breath-taking display of God answering prayers.”

Goodwin continued his travels and made it to all 193 countries but told his mom he wouldn’t go anywhere until she was okay with it, knowing that his captivity also affected his family.

Goodwin currently works in Congressional Advocacy for the James W. Foley Foundation in Washington D.C. He speaks around the world and says he is still in touch with many of his former fellow hostages. Many of them have also been released, according to Goodwin.

“They had crossed paths on social media,” said Wall. “She reached out and he said yes. One thing led to another, and everything just lined up.”

Minot Women Connect is a volunteer group that puts on around three speakers a year.