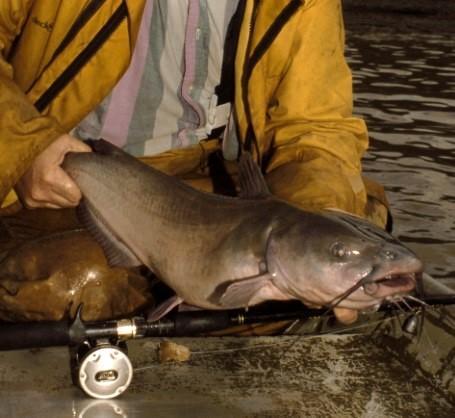 After all, the channel catfish calling the Missouri River tailrace home – or any channel catfish anywhere else for that matter – lack the glittery greenish-gold of walleye or the cutesy bluegill and crappie physique. In fact, they probably remind some folks of the lowly bullhead.

Or maybe even a drum - and not the kind of drum that makes music.

And whiskers – four of them, in fact.

And they’re kind of gray-brown – not exactly eye-catching.

Sadly, they really don’t get much love from North Dakota anglers. Some anglers, though, may remember when bullheads and other native species were highly sought after during a fishing outing.

However, that was before a cooperative Garrison Dam and Valley City National Fish hatcheries and N.D. Game and Fish Department program began with the agencies working together to enhance fishing opportunities in the state.

Most notably, it introduced walleye to an increasing number of lakes, elevating them to near king-like status among anglers in terms of desirable catches.

Since then pike, sauger, bullheads, and even channel catfish just don’t have the glitz and glamour that comes with walleye fishing. Granted, anglers still seek those other species out, but walleye are king.

Yes, channel catfish seriously lack angler love, although they receive a little show of affection from anglers who treasure fishing for them on the Red River. For the true catfish angler, the Red River has a hefty reputation for big ‘cats and catch-and-release is hugely popular. But that’s a couple of hundred miles away.

The Missouri River System offers a nearby alternative. There they get love from a few folks who know the secrets to their whereabouts on the Little Missouri River, the upper end of Lake Sakakawea, and maybe even Lake Oahe downstream of Bismarck-Mandan.

Thankfully, there is also a niche of anglers with catfish love for those calling the Missouri River tailrace below Garrison Dam home.

The tailrace and its catfish provide an opportunity for those who grew up fishing for ‘cats to find that experience in North Dakota. Tailrace anglers typically catch nice, eater-sized catfish in that 1- to 3-pound range working the tailrace chutes from boats. Or they may find them fishing the wing walls, although that’s often at night. They can even catch them from shore during the day.

Presentations used when targeting catfish on the Missouri River aren’t much different from what one might use when fishing for The King – walleye: Try vertical drifting with smelt or nightcrawlers – or any typical walleye rigging because anglers are typically working the fast water of the tailrace chutes or immediately downstream.

With most fish less than 5 pounds in the tailrace, one’s line weight really doesn’t matter – anything from 8-pound up to 16-pound test line.

One trick that could make a difference in keeping or releasing a catfish is the size of hook – try larger hooks such as a No. 2 or larger - if the hook is too small it’s more difficult to get it out easily.

It’s hard to say why channel catfish don’t get much love. Maybe it is their appearance. Maybe it’s because they’re not named “walleye”.

Or maybe it’s because most folks don’t remember or don’t know that for a long-time catfish were deservedly prized as great eating, native North Dakota fish.

Take a trip to the tailrace and try to catch a few of those eater-sized tailrace catfish. Cook ‘em up. While catfish will likely never attain the popularity they enjoy elsewhere - and most certainly could never topple King Walleye from its perch on Top of the Hill – they’re a great reason to get out, fish, and enjoy the outdoors.

And maybe they will get back the angler love they deserve as a true native North Dakota fish.

For those who already know the great taste of catfish caught in fresh, cold water the Missouri River tailrace is a neat spot to check out. Just head downstream of Garrison Dam along N.D. Highway 200 by Riverdale.