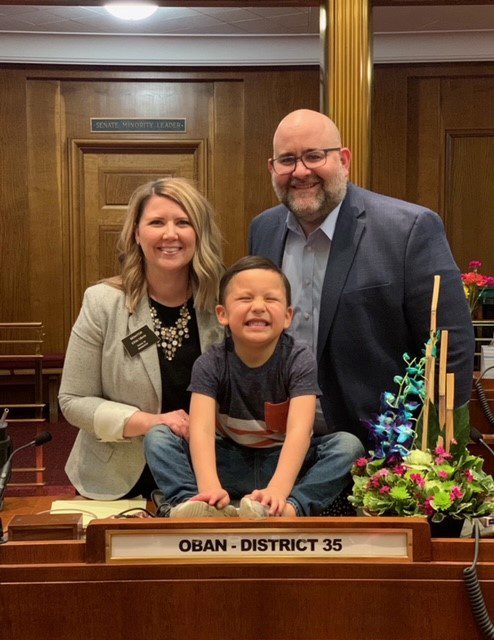 Erin and Chad Oban, with their son Evin. [Photo: submitted by Chad Oban]

Erin and Chad Oban, with their son Evin. [Photo: submitted by Chad Oban]

BISMARCK — Former Senator and current Rural Development State director Erin Oban, D-Dis 35, was a Senator for four sessions since 2015. Her husband, Chad Oban, described his perspective, saying it was unique, since his own father also served in the legislature.

Oban said he has worked in politics himself as the executive director of the Democratic Party in North Dakota.

“I had somewhat tried to dissuade [Erin] from running,” Oban said. “I very much had the thought that it was going to be very complicated. I knew the race that she was contemplating running was going to be the most high-profile race in the state.”

Erin Oban ran against Margaret Sitte in 2014 and Gary Emineth in 2018, both of whom Chad Oban described as high-profile.

“The more I thought about it, she was the perfect candidate to do this work,” said Oban.

Oban says it helped to have been the son of a legislator as well as working in politics himself, because it kept his eyes wide open.

“But even having my eyes wide open, it’s different,” Oban clarified. “It’s different having your spouse on the ballot. The hits lay in a little more personally when it’s your wife rather than being a kid and it’s your father.”

Oban explained he believes his wife is better at letting negative comments go than he is himself.

“There’s still people who I know had said stuff about Erin, or helped her opponents that, they might not know it, but I’ll never forget,” said Oban.

Oban described that what he appreciated about his wife was “her ability to get along with everybody and find common ground with Republicans, Democrats, far-left, far-right, constituents. She would get nasty emails from people who disagreed with a vote, and then after a couple emails, they were having coffee together. To bring down the rhetoric and have real conversations. We don’t have enough legislators who go to the capitol to try to solve real problems. She really focused on getting things done.”

Oban said there were also times where he felt his wife had voted wrong.

“I would send her emails that started out with, ‘I’m not your husband right now, I’m a constituent,’” Oban laughed. “More times than not I think she voted right.”

Chad and Erin Oban both live in Bismarck, within walking distance of the capitol. Oban said this was in some ways more difficult than if they lived farther, because the schedule was less consistent.

“Not knowing what your spouse’s schedule is going to be like from one day to the next,” said Oban. “We have a child. We had to work through that the first few sessions. I had a good friend tell me, when we adopted our son Evin, when Evin gets sick, you’re gonna find out which job is more important, because when he gets sick, somebody’s going to have to stay home. When Erin was in the Senate, I was the one who had to stay home. Those things are real life problems that everybody experiences. It’s not easy.”

Oban said after every session, Senate Minority Leader Joan Heckaman, D-Dis. 23, would send him a “thank you” note.

“In retrospect I really appreciate it,” said Oban. “It does recognize the fact that this isn’t one person, this is a whole family thing.”

EPA seeks to mandate more use of ethanol and other biofuels