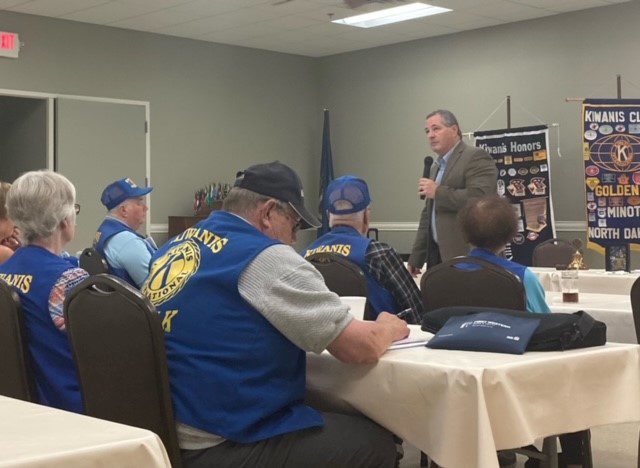 Sabol was also concerned over Gates being involved in the purchasing of 2,100 acres of farmland near Grand Forks.

“If China’s gonna be there, they’re gonna be darn close to the airbase there,” said Sabol.

“Yes, there was a sale made by the Campbell Brothers and it appears they sought out the Gates Foundation to purchase their land,” said Goehring, in response to the Gates concern. “People that live in that area, people that live around the state that know about the situation, they’re probably more angry because, first of all they don’t want Bill Gates as a neighbor, but the land was sold for less than what it would have been auctioned.”

Goehring added that he believes there is nothing illegal about it.

“There’s nothing illegal in the United States about an individual owning land, as long as they’re a U.S. citizen,” said Goehring, leading to the second concern.

Goehring said he talked with the Federal Bureau of Investigations and Department of Defense about the China-based company, saying both agencies were aware of the issue.

“What Fufeng Group is proposing to do isn’t unlawful,” said Goehring. “We have entities all the time who are purchasing land or facilities in the United States. Every state has a different structure as to what they’ll allow any one entity, foreign entity or foreign person. In North Dakota I think it’s 150 or 160 acres.”

Guffey said he is still concerned, saying when entities from other countries purchase land in the U.S., their products are sold in the U.S.

“Where, when China comes in here, does this stuff stay here in North Dakota to help us, or is it feeding them over there?” Guffey asked.

Goehring responded, saying the question is irrelevant as long as Fufeng Group pays for the products, it can do whatever it wants with it, including throwing it in a lake.

“96% of everything produced in North Dakota leaves our state,” said Goehring. “Some of it goes to surrounding states, across the border, or it ends up someplace else. I like that we have more value added, I don’t like that it’s China, but the reality is, I don’t have a leg to stand on because if there’s nothing unlawful about it, just because I don’t like something, doesn’t mean it should go away.”