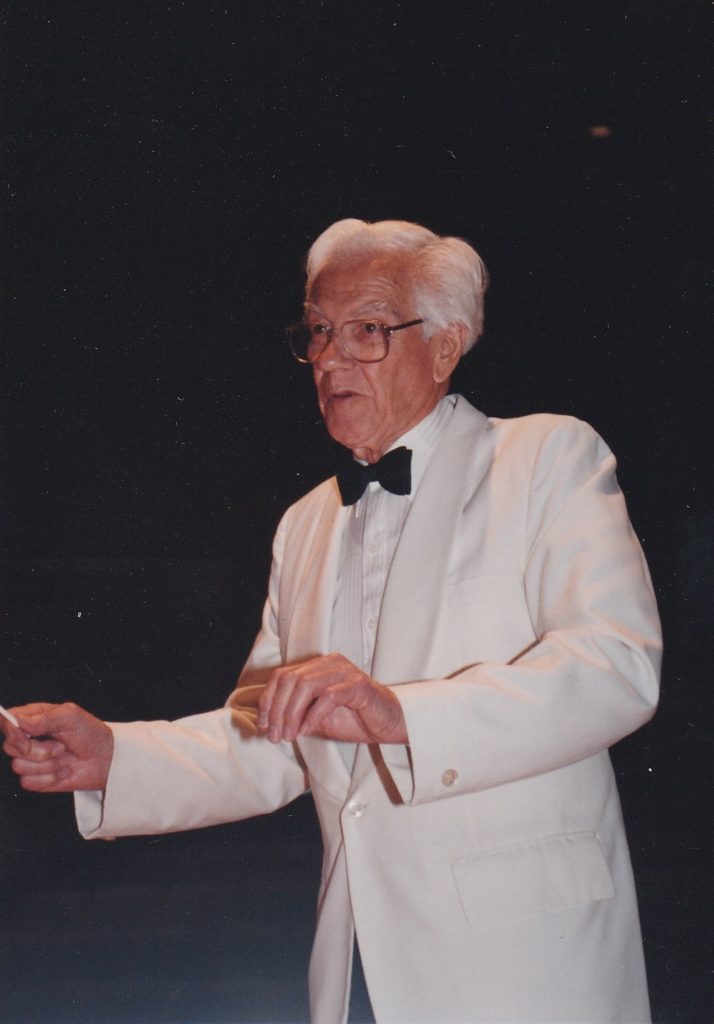 Utgaard died Dec. 19, 1998, at the age of 84. Burgum presented the Rough Rider Award, symbolized by a bust of President Theodore Roosevelt, to Utgaard’s three children before a concert performed tonight at the International Music Camp during this weekend’s celebration of the 90th anniversary of the International Peace Garden.

“We are extremely proud to accept this award on behalf of our father Dr. Merton Utgaard. He would be honored and humbled to be counted among the recipients of the Rough Rider Award,” said Utgaard’s daughter Karen Rolston of Mesa, Ariz. “Our father loved North Dakota. He was born and raised here, and although his teaching career took us to several other states, he returned to North Dakota in the late 1950s and has always thought of North Dakota as his home. He loved music, teaching and young people. With this being the place where he got his start in music, it was the logical location for him to start a music camp. He was a man of few words, but someone who made his voice heard with his love of music. He never stopped sharing this love of his, with the citizens of North Dakota, the United States, Canada and many places around the world. We thank Governor Burgum and the Rough Rider Committee for this amazing honor and thank the Peace Garden for the spark you gave Dad, so he could make his dream come true.”

Originally from Maddock, N.D., Utgaard was introduced to music at an early age by his father, who played alto horn in local concerts. Utgaard began playing the coronet in sixth grade and continued through high school. Upon graduating in 1933, he enrolled in the Teachers College in Valley City earning his teaching certificate. In 1940, Utgaard earned bachelor’s degrees in music and physics from Valley City State University in furtherance of his career. From 1943 to 1945, Utgaard served as a commissioned officer in the Army Air Corps. After his honorable discharge, he enlisted with the Army Air Corps Reserve, serving for 20 years and retiring with the rank of major.

Utgaard and his wife, Noella, founded the International Music Camp in 1956. The idea for a music camp in North Dakota first came to Utgaard while teaching in a summer program at Ball State. After some thought and research, he remembered attending the dedication of the International Peace Garden in 1932 as an Eagle Scout and felt that it would be an ideal location for a summer music camp bringing together students from both the United States and Canada. After personally recruiting for the camp at schools across North Dakota, and with assistance from the International Peace Garden and the University of North Dakota, Utgaard launched the first International Music Camp on July 1, 1956, with 113 students and 19 directors attending. The program grew quickly, and in 1960, he was appointed the camp’s first full-time director – a position he would hold for 28 years.

The vision, perseverance and tireless efforts of Utgaard helped to grow the International Music Camp to a world-renowned program serving more than 140,000 students and directors from 84 countries around the world. Today, in addition to music education, the International Music Camp provides weeklong programs in dance, creative writing, painting, drawing, theater and several other fine arts disciplines, with nearly 1,000 students this year served by a staff of over 150 artist-teachers from mid-June to early August.

The Theodore Roosevelt Rough Rider Award recognizes present and former North Dakotans who have been influenced by the state in achieving national recognition in their fields of endeavor, thereby reflecting credit and honor upon North Dakota and its citizens. Established during the 1961 Dakota Territory Centennial, the award was initially given as an honorary rank of Colonel in the Theodore Roosevelt Rough Riders. North Dakota Secretary of State Al Jaeger and State Historical Society Director Bill Peterson both concurred with Burgum’s selection of Utgaard for the Rough Rider Award.

Utgaard’s portrait will be unveiled and installed in the Theodore Roosevelt Rough Rider Hall of Fame at the North Dakota Capitol in Bismarck at a later date.