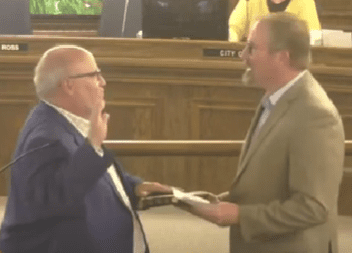 Minot — Mayor Tom Ross of Minot was sworn into office Tuesday, and the Minot City Council voted unanimously to temporarily fill his now vacant alderman seat at the July 18 council meeting. They also voted to add that position to the November ballot for the public to elect a permanent alderman to serve until former Alderman Ross' term is up in June 2024.

Candidate for Minot City Council Zach Raknerud, who lost the primary race, commented on the possibility of the council appointing him as a temporary alderman to fill the vacancy.

"I am eager to throw my hat in the ring to be appointed to the city council to fill the current vacancy," said Raknerud. "I have the capacity and desire to serve the people of Minot. As the runner-up in the race, I was able to connect with voters in Minot and earn the support of over 1700 Minot voters. I believe I bring a valuable perspective and will bring representation for young people in Minot on the council. If I am fortunate enough to be chosen, I will get to work right away to solidify my place during the election in November and demonstrate to them my service in the meantime."

Ashley Beall was sworn in as Minot Municipal Judge. Paul Pitner, Lisa Olson, and Mark Jantzer were sworn in as council members.

Alderman Pitner was voted as president and Alderman Stephan Podrygula as vice president by the council.

Council also unanimously approved a Tax Increment Financing (TIF) District for EPIC Companies. EPIC will pay around $173,000 in property taxes, or “Future Increments" to pay off the bond issued by the City of Minot.

This comes after Ward County agreed to participate for 8 years with 100% of Future Increments going to pay off the bonds. School board and park board will receive 10% of all property tax increment revenue along with all taxes that are currently be collected annually at the 2022 property assessment level.

US wins Group B in world junior hockey