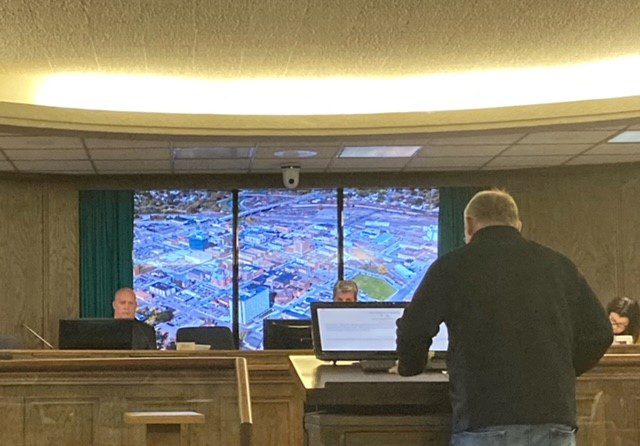 President of Visit Minot Randy Conway faces off with Alderman Tom Ross about the changing of bylaws for Visit Minot at the Minot City Council. [Photo: Lydia Hoverson/The Dakotan]

President of Visit Minot Randy Conway faces off with Alderman Tom Ross about the changing of bylaws for Visit Minot at the Minot City Council. [Photo: Lydia Hoverson/The Dakotan]

MINOT — Discussion at the Minot City Council became tense as motions were made relating to changing the bylaws for Visit Minot on Monday.

The change would allow for 8 out of the 9 Visit Minot board members being elected by the board, as opposed to the previous process in which the mayor and council appointing all 9. Visit Minot says this model is more “community controlled.”

Alderman Tom Ross made a motion to table the item to the next meeting, after the election on June 14.

“This operation is 100% funded by taxpayer dollars,” said Alderman Ross. “It’s not broke. The council is overlooking that. This change from to bylaws takes that away from the council. They’re saying it’s better representation on the board. Well, that’s kind of a slap in the face to the process we have now and a slap in the face to the mayor. The timing of it just doesn’t smell very good either. It comes one week before an election for mayor.”

Alderwoman Carrie Evans said she agrees simply with waiting to discuss the item until after the election.

Alderman Paul Pitner, who brought the item to the table, said that it has been discussed for over a year, and that he was not surprised when Alderman Ross called him that morning saying he would make a motion to table it.

“I asked [Tom] what your concerns were and you stated that Visit Minot is funded by taxpayer dollars, to which I responded, ‘Well, so is Minot Area Chamber EDC and this is very similar to how MACEDC’s board is formed and functions, and I have no issue with it,’” said Alderman Pitner. “A community-owned and operated board is by far the most successful across the state. Tom, you also stated that you had concerns over the reduction of mayoral powers. As a person who preaches small government, [I] found that concerning.”

The motion to table failed 5 to 2.

In response to Alderman Stephan Podrygula’s questions on the transparency of the organization, Visit Minot's executive director Stephanie Schoenrock said that it sends out media alerts before every board meeting, Brady Martz does annual reviews on the organization, and it is open about its finances.

“As far as wrongdoing, or what oversight do you have, obviously every year you have the ability to approve or disapprove of a budget,” said president of Visit Minot Randy Conway. “The bookkeeping is done by a third party. So the innuendo of wrongdoing is actually a little bit insulting.”

Conway clarified that he did not think Alderman Podrygula was making those innuendos, but that he thought Alderman Ross has made comments relating to impropriety. Ross responded saying that he does not remember making such comments.

The motion to change the bylaws passed 6 to 1.

The City Council also approved wayfinding signs to be dispersed throughout Minot.

The signs would be put on sidewalks and some as arches over the roads pointing visitors to different destinations. Those destinations include historic downtown, sports fields and arenas, schools, and recreational centers.

Schoenrock said the project is estimated to cost $980,000. The blueprint can be found here.