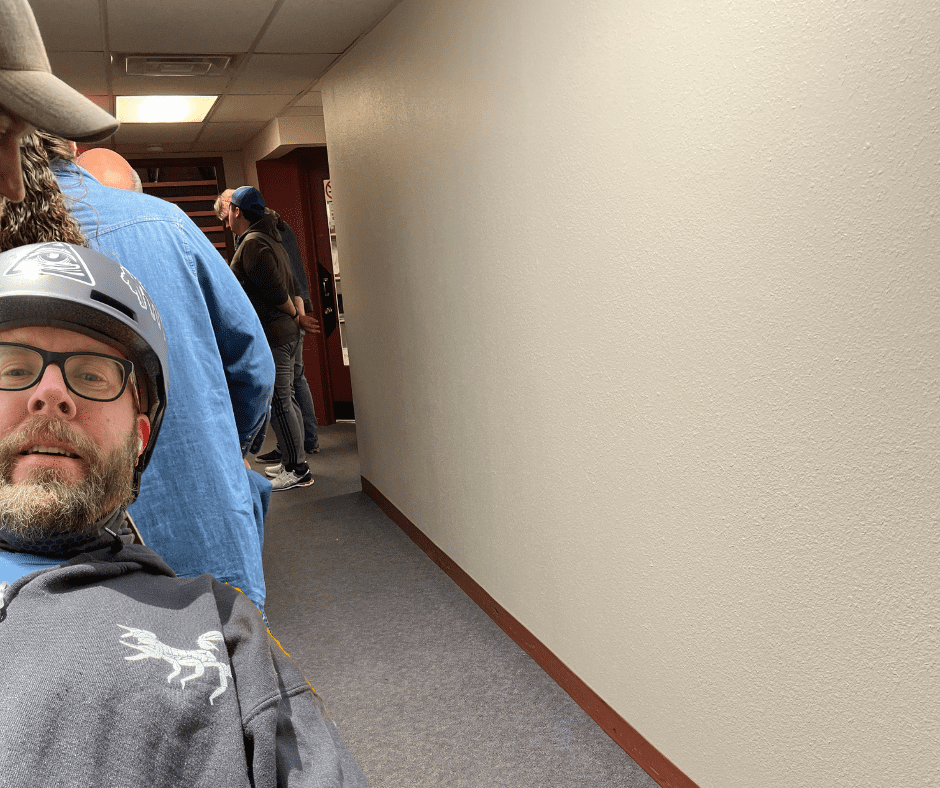 There are rules to being in lines. We live in a society.

I was reminded of this hierarchy this past Saturday while in line for Record Store Day. It had been a long, lonely time since I’d been in a line like this one, I realized sometime during my 47-minute wait in line.

I’m proud to report that there were no line violations during my time in line (or, as they call it in England, in queue) at Rhythm Records in Bismarck. I can’t tell you what the line experience was like at Budget Records in Minot, but I assume it was similarly pleasant and orderly, knowing what I know about Budget, which is one of my favorite record stores I’ve ever been to.

Hi, Budget. If you’re reading this. I miss you.

Back in line about lines. I recognize you may be asking more questions now as to why people would spend an hour or more in line to buy vinyl discs with music somehow magically recorded into tiny grooves at a time in human history where you can stream any song ever recorded directly to your phone from Spotify? Were you waiting for records to become relevant again?

That’s a different column. I want to talk about lines. More specifically, neat and orderly lines, and the rules that help to make your line a good one. KEEP READING TO FIND OUT HOW.

Sure, the rules have changed slightly due to the viral pandemic that somehow became a political debate (you know the one I’m talking about), and there's no winning in debating politics, so I won't. Political debates are part of a rule that's coming up later in this missive. KEEP READING TO FIND OUT MORE.

1. Don't yell. We're in a line. Pass a note down, person to person, until it meets its mark. Keep the peace.

2. Don't cut. I've mostly understood this one since first grade. Back then, I was led to believe that letting someone cut in front of you is cool, because you're inconveniencing yourself near as much as you're inconveniencing everyone behind you. The point is debatable, especially as an adult, and how I can now understand that there are shades of gray. I was a kid then, and not a particularly bright one, at that. Now I am a man, rather dull, but I recognize nuance.

What's not up for debate is giving cuts behind you in line. That's just a slap in the face. Shame to you and your ancestors.

3. Don’t pry. Talking to strangers is mostly alright, because we are all human beings, and human beings need to connect with one another. Just recognize some boundaries. Questions should be kept light.

4. Don't stand so close to me. Granted, the COVID caused retailers to put blue dots on the floor, imploring us to please stand six feet apart. But, really, even when there isn't a contagion on the loose, doesn't six feet of space between us sound kind of ideal? It leaves just enough room for us to lie down, make some snow angels and ponder our very existence.

5. Don’t look back. Be it in anger or in regret. Face forward, so outsiders recognize that there’s a line going on. Fill those gaps. Point at the person in front of you. Make clear there is a line in place and not some random social gathering inside the local pharmacy.

6. Don’t watch Netflix on your phone. You don’t have time to immerse yourself in the latest crime documentary. Some apps are OK, like playing Centipede or scrolling through certain social media platforms. But stay away from Reddit. Next thing you know, you’ll fall down some rabbit hole on why Elon Musk is really buying Twitter, and the line now has to curl around you, which is inconvenient for everyone.

7. Don't take photos. I broke this one, because I needed a photo to include with this column. But I didn’t have the nerve to take a selfie because that’s just self-indulgent behavior. Instead, I Photoshopped myself into this photo of a line I took because technology is fun.

7. Don’t sneeze of COUGH ON OR AT PEOPLE WHO AREN’T YOU. I'M NOT YELLING. I DRIZZLED MUSTARD ON MY PHONE AND SOMETHING IS VERY WRONG.

If You're Bored, You're Doing It Wrong

Fun on a Dime