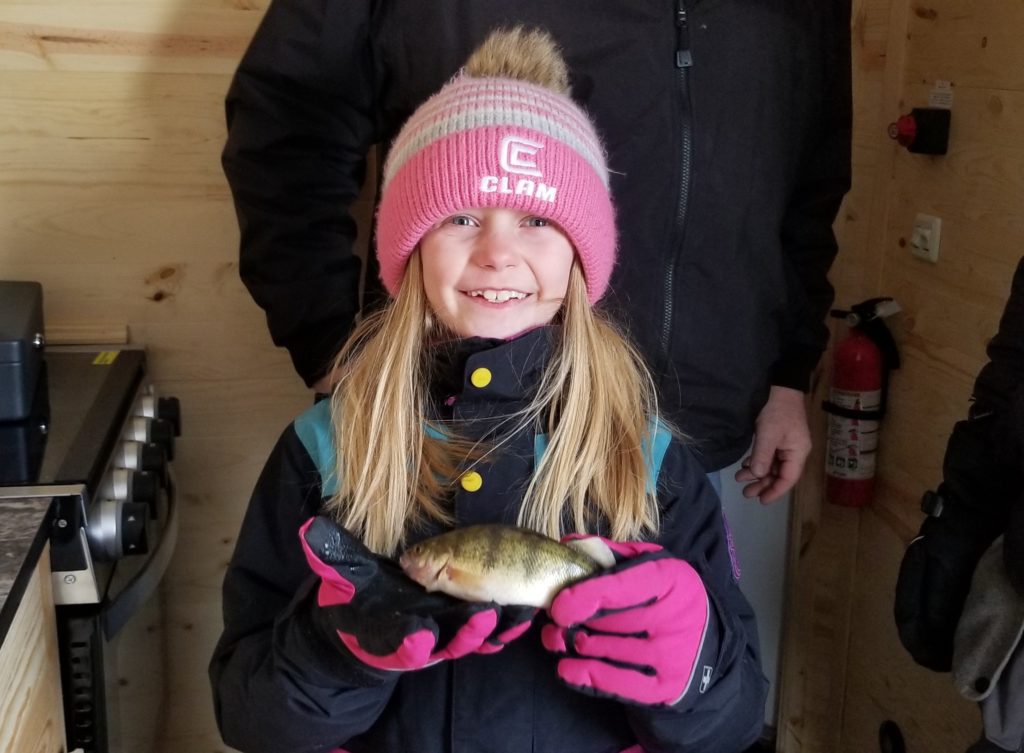 A City on the Ice

Smiles and Fun on Lake Audubon

COLEHARBOR — Her smile was wider than the icehouse door she had just opened.

Avery Geiger, 8, Mandan, proudly brought a perch to weigh-in headquarters shortly after 10 a.m., the starting time for the annual Bis-Man Reel & Rec Ice Fishing Derby. It wasn’t big, but it was a fish, and her visible joy was what the day was all about.

“She likes fishing. She won a fishing rod here one year, so now we have to fish it every year,” laughed Jake Geiger, Avery’s father.

After watching the numbers on the scale display the fish’s weight, the happy angler was rewarded with her choice from a large box of ice fishing lures and a Tootsie Roll pop. After a sincere “thank you,” out the door she and her father went to try and catch another.

“That’s the main thing, kids having fun,” said Wayne Blohm, Bis-Man Reel & Rec president who was also staffing the official scale for the four-hour derby. “It’s just a good community event. Minot people, Bismarck people, surrounding towns come out. This is one of our primary events of the year.”

This year’s derby, held February 19, had nearly 400 entrants with just under 100 kids registered. The popularity of the event turned Lake Audubon into a small city with many fish houses clustered on the ice.


“We’ve got two tournaments going on simultaneously, one for the adults and one for the children,” said Don Schick, Bismarck, Bis-Man Reel & Rec. “We want this to be a fun day. We don’t want the big money.”

The entry fee is a mere $10. Kids 15 and under fish for free, with a chance to win a trophy for placing in the top three for largest perch, walleye, or northern pike.

“They all get t-shirts too,” added Schick. “We’re also giving away a choice of a rod and reel or a tackle box at the end of the day.”

The event is a fundraiser for the Bis-Man club, primarily for its annual Take a Kid Fishing day held in the summer at Sweetbriar Dam. This year’s Take a Kid Fishing will be the 42nd annual. The club has been in existence for 41 years.

“It’s a big deal for the kids,” added Blohm.

Adults were enjoying the day too, whether catching fish or watching a child reel one up through the ice. The day was windy but temperatures agreeable, making for a good day to be on the ice, especially in the warm comfort of either a portable or hard-sided icehouse.

Following the derby, trophies and prizes were awarded during a gathering for participants at the Totten Trail restaurant. The next event on the club’s schedule is its annual Cabin Fever social and dinner set for March 12 in Mandan.