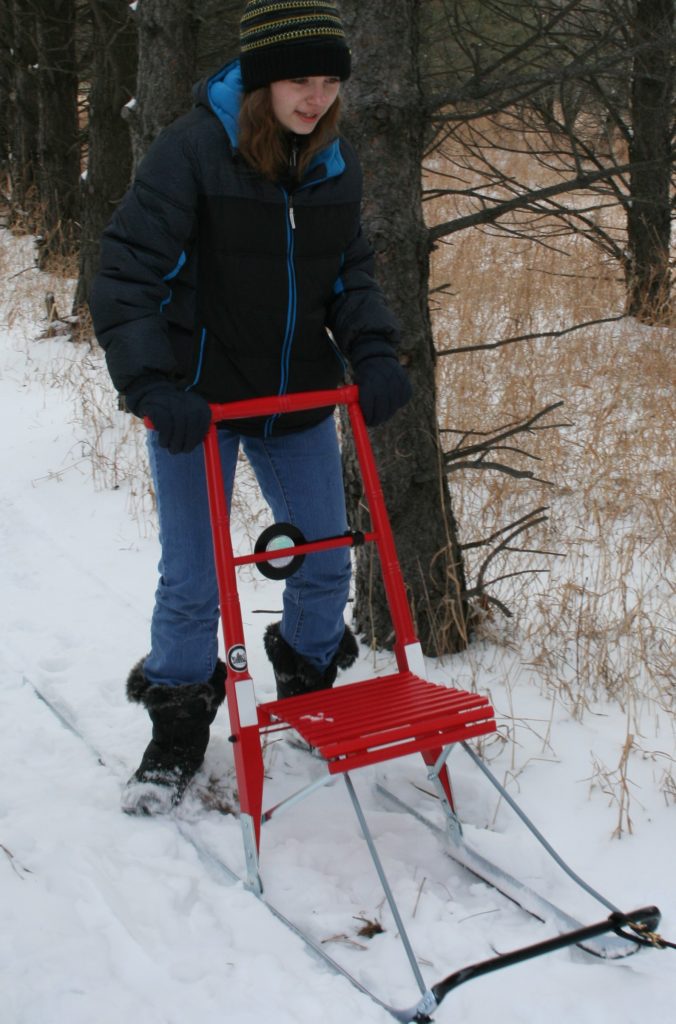 Sometimes the combination of ingenuity and necessity make for fun things, born out of a way to make life simpler and easier while providing some fun along the way.

Or sometimes something designed to be fun turns out to be quite functional.

However, rather than one dog or a team of happy, vociferous canines propelling the rider and sled, a kick-sled user simply stands with one foot on the sled – much as they would a traditional dogsled – propelling forward by kicking back with their other foot to glide the sled forward.

That’s the ingenuity of a kick-sled. A person doesn’t always have to have a dog or dog team handy to get from Point A to Point B when there’s too much snow to get around otherwise. That might be why kick-sleds can come in handy in places like cities in Scandinavian countries, which is also where they were developed.

Granted, one could get around on a snowmobile but most cities don’t really like or allow snowmobiles within their jurisdictional confines.

Kick-sledding is a combination of cross-country skiing and dogsledding, becoming increasingly popular in Scandinavian countries as well as Canada and northern United States. It’s even a way some Scandinavians get around grocery shopping or running other errands, Fort Stevenson State Park Manager Chad Trautman described.

The park’s kick-sled fleet began with one each in the various height ranges, growing their fleet since 2020. They rent for $15 per day in addition to the park’s daily entrance fee or annual pass.

Sled manufacturers also make a dog harness to turn a kick-sled into an actual dogsled.

The trickiest part beginner kick-sled users could encounter might be learning the nuances of turning, Trautman suggested. In other words, a possible face-plant might be in the works but it’s all part of the potential learning curve as it would be for any new activity.  Heck, a wipe-out can happen to even the most experienced folks and a person isn’t usually going that fast, anyway.

With a little practice and sense of humor, kick-sledding is yet another diverse winter recreational opportunity that’s quite family-friendly. Some of the kick-sleds are outside at the park’s Visitor Center, which tends to pique people’s curiosity to try them, Trautman described. Several park trails are maintained for activities like kick-sleds.

The smaller toddler-sized sleds – those fitting children less than 3 feet tall, for example – can interlock with kick-sleds designed for taller adults. If a youngster tuckers out, they can simply hook onto the bigger kick-sled and ride along, Trautman added.

Fort Stevenson State Park’s Visitor Center hours are meant to accommodate winter recreation users, providing additional equipment rental opportunities and the all-important restrooms. It’s open on weekends, as well as during the normal business week, from 8 a.m. to 5 p.m. except holidays. A pot of hot chocolate is usually on, as well – and it’s free.

The park also rents fat tire bikes ($8 an hour or $50 per day) along with Nordic cross-country skis and poles and snowshoes and poles for $15 per day.

She's Not From Around Here: Trash Christmas

No Such Thing as Just Fishing